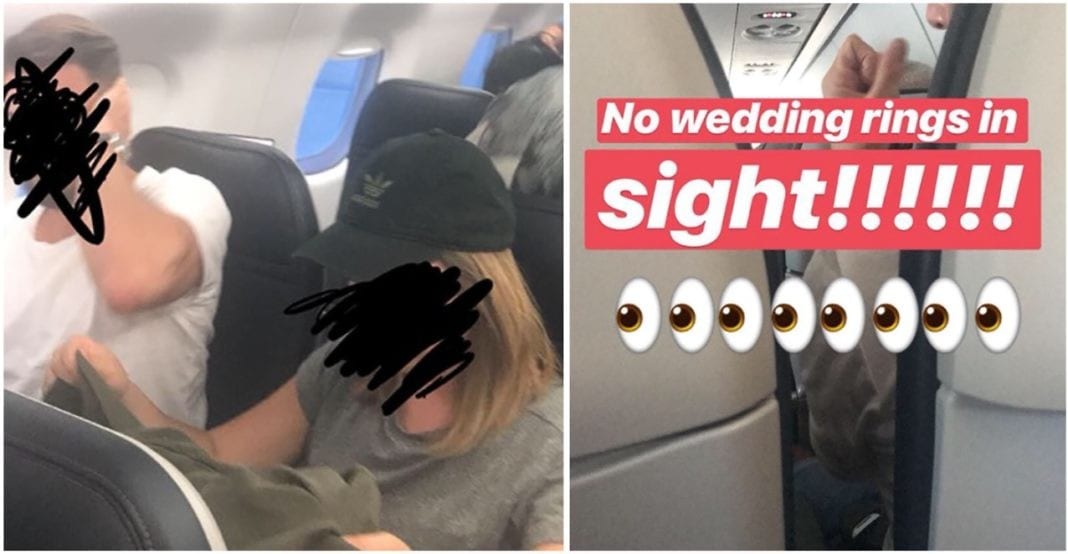 Love. It’s the feeling that makes our hearts flutter, go boom boom, and occasionally break. But even though there are trails and tribulations in our journeys to finding the one (if it happened to be your first love, then f*** you), these ups and downs make life worth living. As the Beatles famously sang, “all you need is love”, and the story you’re about to read a gives a whole new meaning to the cliché that if it’s meant to be, it will be.

Meet Rosey Blair and her boyfriend. As this very sassy picture demonstrates, they’re one hell of a couple, and it turns out that Rosey is basically the human version of Cupid – y’know, the naked cherub who shoots potential lovebirds with his magical arrow. This fabulous pair were recently on a flight and not wanting to have a stranger separate them, they politely asked the woman if it would be okay if she could move seat.

Rosey took to Twitter to explain what happened, opening the most romantic thread the micro-blogging website has ever seen by writing, “Last night on a flight home, my boyfriend and I asked a woman to switch seats with me so we could sit together. We made a joke that maybe her new seat partner would be the love of her life and well, now I present you with this thread.”

Cue the opening trumpets from ‘Love Is All You Need’…

“We weren’t sitting next to each other so we asked our seatmates if we could switch and now they are FLIRTING!!! Both look like sexy fitness buffs and they are chatting and smiling at each other and we haven’t even left the runway!!!! I hope they get to fall in love!” Rosey explained.

Well, that’s one hell of an opening to this thread, I’m not going to lie. Sometimes the universe does reward people for good deeds.

However, it turns out that these total strangers shared more than just a physical attraction to each other…

“Guess what they have been talking nonstop since we took off. They’re both personal trainers. They have touched arms a few times. They are both vegetarians,” Rosey continued, explaining how the pair’s accidental meeting was perhaps more than just a coincidence.

“No wedding rings in sight!!!!!!” an excited Rosey added – a surefire sign that this guy was most likely single.

Almost everyone in their 20s has watched more than their fair share of TED Talks. Whenever I wake up feeling like poop, I watch one while getting ready so that I can start the day with an inspirational spring in my step, even if I only got a few hours sleep.

It turns out that this woman is also a fan of them and Rosey added, “She is sending him a TED Talk when they land.”

Rosey and her boyfriend were not the only people who noticed this pair’s blossoming romance, either.

To hear about quite possibly the worst date in history, check out the video below:

“This baby keeps waving at them saying ‘hi’ and they are waving back at the baby. The baby senses the love,” Rosey wrote. “I can’t make this shit up. There is no TV on this flight but there is WiFi and romance!!!!!!”

Babies and dogs can sense good in the world. Honestly, it might not be scientifically proven and I may have just made that up, but they just know.

As Rosey was keeping her friends and family updated as this story developed, she promised them that she would see it through to its conclusion.

“Don’t worry I am following this story to baggage claim. I will have answers for you!!!!” she wrote.

Rosey made a point of remarking that the woman she’d unknowingly set up was attractive, writing, “She pretty.”

And better still, she’d been given an equally attractive seatmate who Rosey described as “hunky”.

Needless to say, the lack of onboard entertainment was not a problem for this couple, and Rosey’s partner was just as invested in the situation.

“We excited,” she wrote alongside an adorable selfie.

Realizing that she had a good thing going, the woman in front of Rosey decided that she’d go to the bathroom to make herself even more attractive.

“She went into [the] bathroom with her ponytail up and came back with her hair down,” Rosey wrote. “Now she is asking for some fitness tips.”

This woman’s seatmate clearly knew that they had a connection and the pair inched their way closer together.

“So much closer,” remarked Rosey.

It then transpired that the hunky man was hunky for a reason and Rosey wrote, “After I switched spot with her I literally said to my boyfriend ‘I hope she meets the love of her life’ and the hunky dude walks over and we FREAK OUT. He used to be a pro soccer player.”

“DRINK CART!!!!!!” Rosey explained, hoping that the pair would take advantage of the onboard refreshments.

And the potential couple did not disappoint, but not in the way that Rosey was expecting them to.

“They mofuggin sharing this menu between each other,” Rosey cooed.

Instead of opting for an alcoholic drink as the majority of would-be couples do on first dates, the pair chose something much healthier.

“It’s so on,” Rosey wrote, drawing a heart around the strangers.

“No one ordered drinks by they sharing a CHEESE (PROTEIN) BOARD!”

Now that sounds promising. You do need to have some common ground with the love of your life, after all.

The pair’s blossoming romance only went from strength to strength with the addition of cheese, and the hunk showed his seatmate his mom.

Her: ‘Omg your mom is SO HOT!” Rosey wrote, quoting them.

After showing his potential new bae his mom (and maybe her future mom-in-law), she decided to open up about her family too.

“Now she is showing him family photos,” Rosey said, updating her no doubt captivated followers.

“Compelling stuff,” Rosey added, alongside a picture of her and her boyfriend which could have easily been taken in a movie theatre and not a plane.

“FYI everyone. I lost my free hour of WiFi so I paid for WiFi just to keep you posted lmao,” Rosey continued.

When you meet an attractive stranger, what is the first thing you do once the conversation is flowing? Get their number, of course.

“She took his phone y’all. What what what [sic] this confident QUEEN,” Rosey wrote.

Rosey then updated her followers on a very important detail that she’d neglected to mention until this point.

“Important detail. This plane has no A/C,” Rosey revealed. “The flight attendants keep handing out water. Why would you sit closer to your seat partner unless you wanna SMOOCH?!”

“I just bought another half hour of WiFi,” she wrote, unable to stop recording this real-life love story.

She also made a point of adding that she was watching it content in the knowledge that she’d already found the love of her life.

“Meanwhile the love my life is organizing my purse,” Rosey lovingly captioned a picture of her boyfriend.

She noticed that the would-be couple were getting even more up close and personal and simply wrote, “YAS!!!!”

But this love story had the potential to come to a brutal end for those watching Rosey’s feed.

“Pray for my battery! We will be landing soon!!!! I need to see this end well,” Rosey wrote.

Then the story took an unexpectedly sexy turn…

“Breaking. They just left for the bathroom at the SAME TIME,” she wrote.

Now, maybe it’s just me, but I can’t help but think that they might have just decided to become members of the Mile High Club.

“Back from the bathroom together. Now both cleaning up trash and helping each other clean their space,” Rosey wrote.

I wonder if this mutual desire to clean up was also the case after their possible tryst in the bathroom!

What’s more is that the woman became even friendlier with the man. By this point, Rosey could barely contain her excitement.

Thankfully, Rosey’s followers weren’t about to abruptly have their real-time love story end, either.

Everyone knows that while sexual attraction is an important part of a relationship, as are common interests, it will never work out if the people in it do not have similar goals for the future (see Nikki Bella and John Cena’s relationship).

“They just started talking about what they want out of life,” Rosey wrote. “Marriage, kids etc. [He] says he’s been too dedicated to his fitness to pursue relationships. That’s all I got now they are talking so QUIET!!!!!”

Rosey then added that the most romantic incident she had ever witnessed was quickly coming to an end and she wanted to follow it for as long as possible, writing, “We are descending in 25 minutes y’all ima follow this.”

“They just followed each other on IG,” she added.

When the plane finally landed, Rosey then took a sly picture of the pair.

Who knows? If they end up getting married, they might treasure this picture as a memento of their first accidental date.

Rosey was delighted when she followed the would-be couple off the plan and saw them heading to baggage collection together. “OMFG!!!!!” she wrote.

It then transpired that the hunky dude was not just anyone, but former soccer pro, Euan Holden.

Rosey was certainly impressed by this shirtless picture of him and captioned it, “This is the dude from the plane!!!!! Yaaaaaaas girl!!!!!”

After posting the incredible thread to Twitter, it quickly went viral and it didn’t take long for it to get back to Euan himself.

The thread has thus far racked up 545K likes and 220K retweets and the good people of Twitter certainly had some questions for Euan.

The Cooligans asked the question on everyone’s mind, writing, “BUT WHAT HAPPENED IN THE BATHROOM EUAN?!?”

Euan, however, refused to divulge any of the juicy details and simply replied, “A gentleman would never say.”

Others simply echoed my sentiments about Rosey being Cupid and requested that she sets them up on a plane.

“Can you please be in the same plane as me, too? I need help finding the love of my life. You’re good at matching 🙂 Okaythanksbyeee (sic)”

It’s often said that if a romance is meant it to be, it will be. Just think about all the chance events that can bring potential lovebirds together. I mean, what were the odds that two people with such similar interests would sit together on a plane AFTER one of them was told by a stranger that she hoped she’d meet her true love?! One thing’s for sure – I hope that they invite Rosey and her boyfriend to their wedding!

Taking A Stand: Reynolds Wrap Has Banned Daniel Tosh From Using Its Products Because...

Who Knew Salt Was So Useful? Here Are 21 Crazy Uses For The Mineral