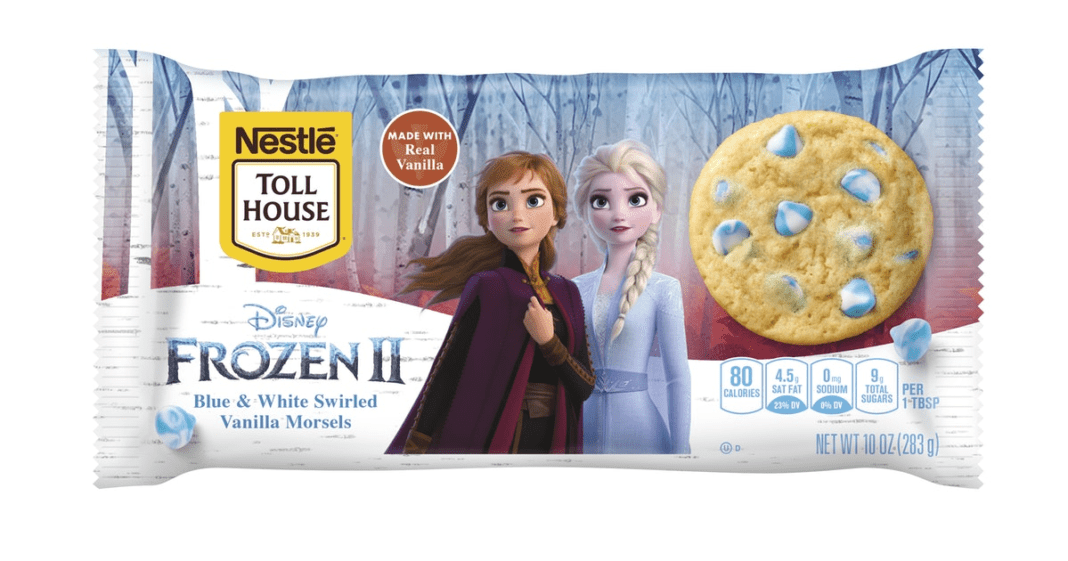 As a kid, I remember waiting patiently during the holidays for all the adorable cookie offerings to hit the stores. But honestly, it doesn’t always have to be a holiday to enjoy super cute cookies. On Saturday, Oct. 5, Nestlé Toll House took to Instagram to share new products set to hit store shelves. They are adorable, and Disney fans are going to want these ASAP. Nestlé Toll House’s Cookie Dough and Morsels are going to transport you to Arendelle with their cute little snowflake sprinkles and winter-themed morsels.

Ever since was released back in 2013, I’m pretty sure people have been counting down the days for a sequel. It has been quite a while, as Disney first announced back in March 2015. It’s been four years since that announcement, but fans will be pleased that the wait is nearly over. will hit theaters on Nov. 22. You’ll get to see Elsa and Anna all over again in a brand new adventure.

Disney has already released official trailers to keep you excited for the film’s premiere. The official Disney website hints at the sequel’s plot, saying that Elsa’s “answer” to her magical powers “is calling her and threatening her kingdom.” While I’m sure that fans of the original movie can’t wait for the sequel to drop, I’m also pretty sure that they’re going to want to celebrate before the movie comes out… with the super cute Nestlé Cookie Dough and Morsels.

The company posted the announcement in its Instagram page, and the new movie-themed sweets look incredible. According to a Nestlé Toll House rep, the Cookie Dough will be available at a suggested retailer price of $2.99, while the Morsels will be around $3.19. Both of the products should be available in stores as of October 2019, but the Blue and White Swirled Vanilla Morsels will only be available through December 2019, while the Sugar Cookie Dough will be sold through April 2020.

Wondering where you will be able to buy these cute products? The Nestlé Toll House Morsels will be sold at Kroger, Meijer, Wakefern, Albertsons, Safeway, Giant Eagle, and Hy Vee. The Nestlé Cookie Dough, though, will appear on shelves at Walmaart, Kroger, Meijer, Target, Food Lion, Publix, Wakefern, SpartenNash, and Harris Teeter.

The ookie Dough is Nestlé’s sugar cookie dough “topped with snowflake sprinkles” and according to the Nestlé site, Very Best Baking, has no “artificial flavors or colors and no preservatives.” My fave part are those snowflake sprinkles, though. Seriously, how much cuter can these -themed bites get? I mean, unless Nestlé came out with Olaf or Sven cookies.

The Morsels are also incredibly cute. These will make it easy to make your very own themed cookies at home. Very Best Baking describes the morsels are “blue and white swirled vanilla” and encourages you to try them in baked goods such as brownies, pancakes, cupcakes, and cookies.

These are going to make your prep for the premiere a sweet time. I know that everyone has been super excited for the upcoming release, but what better way to make the time fly by than to pop some delicious sugar cookies in the oven?

I know when the first trailer came out in February, fans were already speculating that Elsa could get a girlfriend in the sequel. But that has since been put to rest. In fact, in an exclusive interview with , Jennifer Lee — one of the writers and directors of explained that the team “found this is a woman who wasn’t ready for a relationship at all. She’s carrying a lot of pressure and the weight of her kingdom on her shoulders and struggling with this call for her powers.” So obviously, Elsa is just focusing on herself and probably living her own version of #HotGirlSummer in her wintery land, likely complete with -themed cookies, of course.

10 Clues In Your Apartment That Prove You’re Always DTF