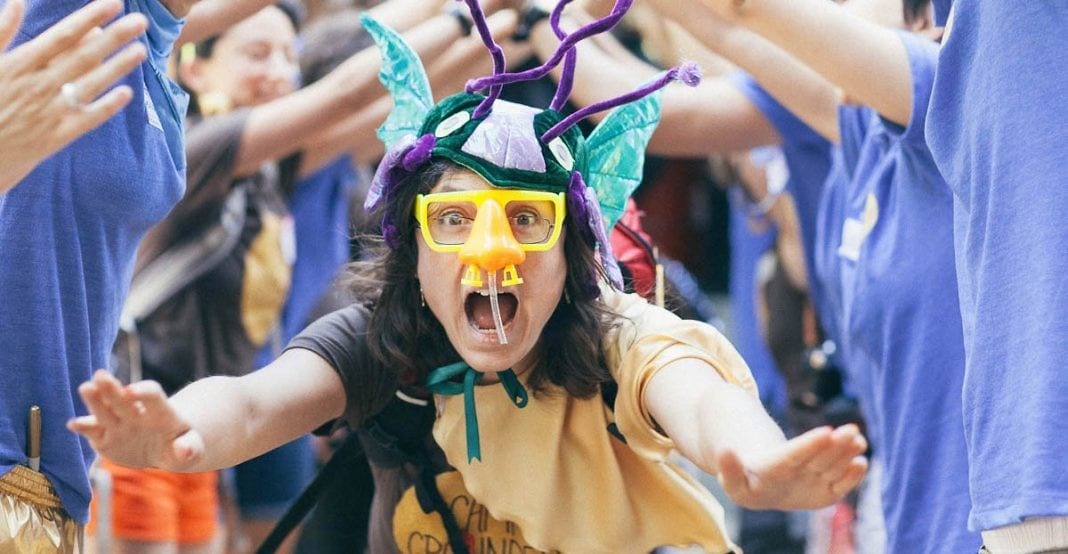 Cameron McCoy is a 41-year-old higher-education worker who recently decided he needed a break.

“We really live in work-life integration,” he told Upworthy. “There’s no such thing as balance anymore.”

So he decided to do something that might sound a little unusual: He went to adult summer camp.

go to adult summer camps every year, putting down their cellphones and turning to archery, water sports, and, depending on which camp they attend, a few cocktails to rediscover a world of few responsibilities.

“[Adult summer camp] was an opportunity to not have any technology with me,” Cameron explained. “To not be concerned about time. Really, just to get more centered and to spend some time with other people going through the same situation.”

Here are 19 reasons why summer camp for grown-ups totally rocks:

1. The first rule of summer camp: There will be dance parties.

2. And there’s no age limit! Because you’re never too old for a limbo competition.

3. You can go alone or with friends. It’s all good.

4. A lot of camps are strictly phones down. Or, at the very least, they have terrible service.

She went to sleepaway camp pretty much every year as a kid and thinks the grown-up version is just as good.

“I met this one girl [at adult summer camp], and we just started walking around to all the different bunks, because that’s what you did as a kid,” she said. “But all the bunks were empty. Everyone was out doing stuff. That was awesome to see.”

8. Other campers, like 37-year-old Jennifer, are making up for lost time.

She’s been twice now and is ready to go back next summer.

9. Some camps have booze on hand to help folks relax, but there are plenty of options out there for all different kinds of campers.

10. Most camps have dance-offs, lip-sync battles, talent shows, and other camper-led performances (if you’re bold enough to join in).

11. But one of the biggest draws is that these camps are a rare chance to really connect with total strangers.

12. Seriously with total strangers! Holding hands! You won’t find connections like these at an all-inclusive resort.

13. Who you are and what you do for a living don’t matter at adult summer camp. The fact that hardly anyone knows each other is kind of the point, according to camper Shelby Walsh.

Most of the year, Walsh is the very-important vice president of an online trend community. But for a few days, in the summer, at least, she was just Shelby.

“You’re not allowed to talk about what you do,” Walsh told Upworthy. She says there were a lot of young professionals there, but tubing, archery, and arts and crafts took priority over networking.

And perhaps most importantly? “I would definitely do it again.”

14. At some camps, attendees are asked to take nicknames.

“It’s part of letting your real life go,” McCoy says, though he was skeptical of the request at first.

“Some people felt more comfortable that way. It wasn’t about status or class or where you came from after that. Some people, you never even knew their real name.”

16. Think about it when was the last time you did arts and crafts (without your kids totally taking over)?

17. Of course, it wouldn’t be summer camp without magnificent campfires.

18. Like all things, though, camp has to end eventually. Going back to the real world is no fun.

“I wasn’t in a hurry to get back. I wasn’t eager to pick up my phone again,” McCoy said. “But I was a lot more relaxed about my life when I left than when I got there.”

19. The best part? Grown-up summer camp is a pretty affordable way to unwind.

Most camps run a couple hundred bucks for three days of lodging, food, and drinks; though your travel to and from the camp isn’t covered.

And not only that, but the costs are totally fixed. Tichauer says a lot of the folks who sign up for Camp No Counselors do so because “its a simple turnkey weekend. You pay your money, you show up, and we have everything planned. Lodging, meals, activities, the potential for future friends. Everything.”

With a little effort, we could all make a little more room for those things in our busy lives.

Google Maps’ Foursquare-like lists feature is getting closer to launch