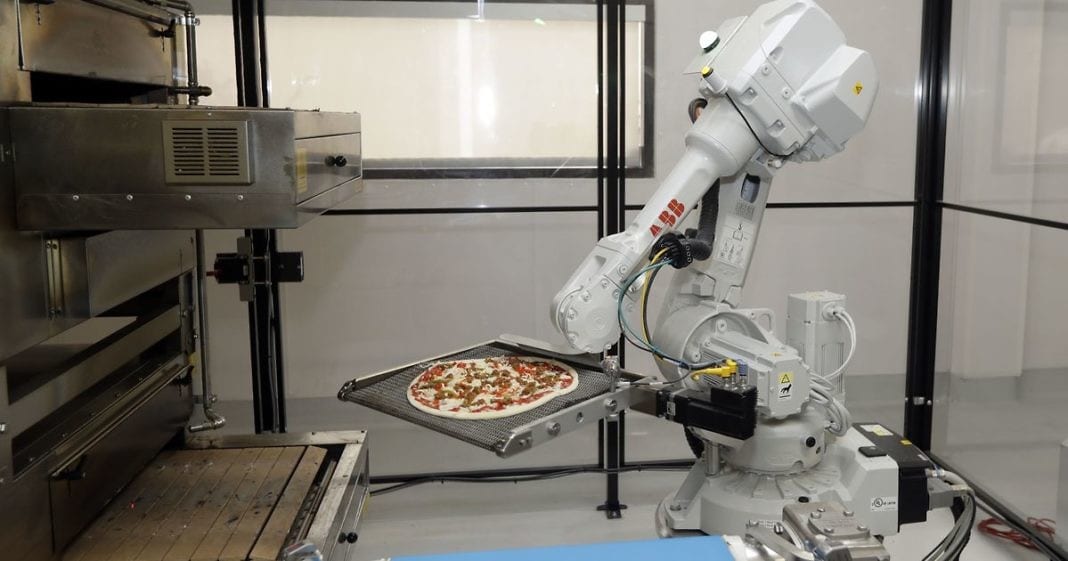 If you ordered it from Silicon Valleys Zume Pizza, the answer is yes.

The startup, which began delivery in April, is using intelligent machines to grab a slice of the multibillion-dollar pizza delivery market.

Zume is one of a growing number of food-tech firms seeking to disrupt the restaurant industry with software and robots.

Were going to eliminate boring, repetitive, dangerous jobs, and were going to free up people to do things that are higher value, said co-founder Alex Garden, a former Microsoft manager and president of mobile game maker Zynga Studios.

Inside its commercial kitchen in Mountain View, pizza dough travels down a conveyer belt where machines add the sauce, spread it and later carefully slide the uncooked pies into an 800-degree oven.

The startup will soon add robots to prep the dough, add cheese and toppings, take pizzas out of the oven, cut them into slices and box them for delivery.

We automate those repetitive tasks, so that we can spend more money on higher quality ingredients, said Julia Collins, Zumes CEO and cofounder. There will always be a model here at Zume where robots and humans work together to create delicious food.

In Silicon Valley and beyond, tech startups are building robots to help reduce labor costs, speed production and improve safety in the restaurant industry.

Were trying to automate some of the stations you might find in restaurants, said co-founder Jay Reppert. Its quicker, its cheaper, its more consistent and its this really fun experience to share with people.

Robots may be able to produce simple foods such as pizza, burgers and sandwiches, but they wont be taking over restaurants anytime soon because they still struggle with irregular tasks that require fine motor skills, judgment and taste, said Ken Goldberg, who directs the University of California, Berkeleys Automation Lab.

There are so many jobs in food service that are so complex that it will be a very long time before we have robots doing them, Goldberg said. I want to reassure restaurant workers that the skills they have are still going to be of value.

Zumes founders say the company doesnt plan to eliminate any of its roughly 50 employees, but move them into new jobs as robots take over more kitchen work and the company opens new locations.

Zume also wants to bring innovation to pizza delivery. This fall the startup plans to deploy trucks equipped with 56 ovens that can bake pizzas en route to customers, allowing them to deliver dozens of orders before returning to the kitchen.

The company is trying to shorten delivery times with software to anticipate when and what kind of pizzas customers will order.

Its delicious. Its always hot and fresh when it comes, Suzuki said. I cant tell the difference that its made by a robot versus a human.

This Is Why So Many Women Don’t Come Forward About Sexual Harassment In The...