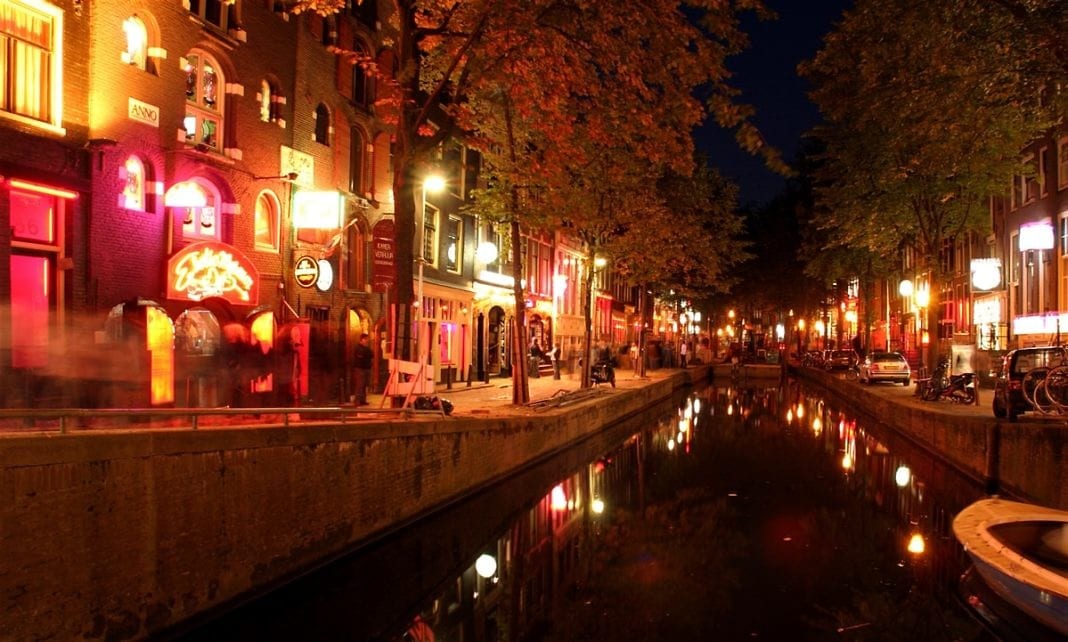 The Dutch governments plan to clean up Amsterdams red-light district and rid the area of organised crime has forced the closure of many brothels, displacing sex workers and leaving the most valuable buildings up for development 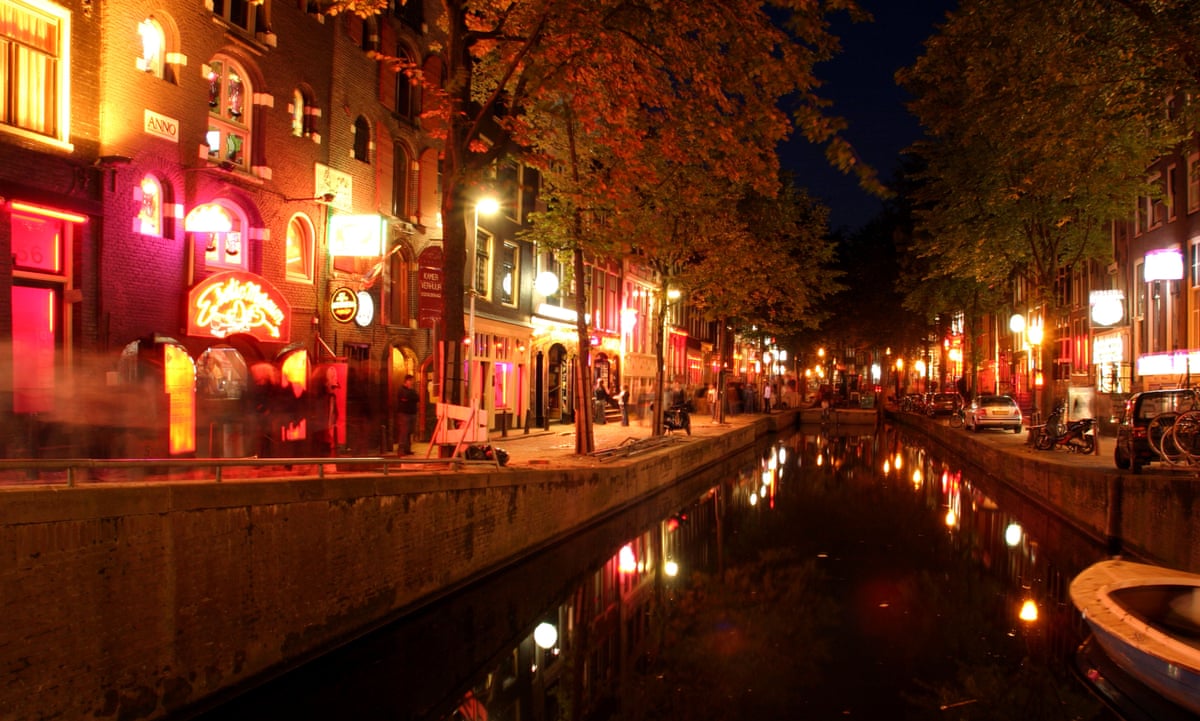 A herd of pink unicorns peer into the window, clutching their phones and arguing about the best way to reach Leidseplein. Its raining outside, and the unicorns plush costumes are saturated and muddy at the ankles. Stag parties are a common sight around the Oude Kerk, the heart of Amsterdams red-light district. Another group appears, wearing matching T-shirts saying Daves Lash-On: Only Pints and Strippers. They too, stare.

This scrutiny is irritating but understandable; I am sitting in the window of Amsterdams Prostitution Information Centre (PIC). Just two doors away, scantily dressed women sit in the windows, looking for customers. The PIC is a dark, warm cafe, plastered with historical articles about prostitution, alongside sparkly Christmas decorations. Like the red-light district itself, its a combination of suggestive camp and gaudy commercialism. Set up by former sex worker and author Mariska Majoor as an information resource, tourism business and cake shop, its the kind of place where you can ask for a third slice of apple tart or the local rate for a blow job in the same breath.

How long this matter-of-fact way that sex is addressed in Amsterdam will last, however, has Majoor very concerned. A government plan called Project 1012 set out to clean up the red-light district and, since it began in 2007, an estimated 126 windows have been closed, leading to protests from brothel owners, a march on city hall and accusations that politicians are scapegoating the sex trade to justify a blatant land grab. Some respite came for those who protested when it was announced at the end of 2015 that the council would stop closing windows. But for some of the red-light districts residents, the damage had already been done.

Named after the districts postcode, Project 1012 aims to replace brothel windows with luxury boutiques, upscale cafes and art projects. The idea is to make it less attractive to already rampant organised crime, and bring in a higher class of tourist (under the somewhat questionable assumption that wealthy people dont visit sex workers). Two new ventures, Red Light radio station and the Red Light Secrets museum, are the advance guard of this gentrifying project, which has played well in the Dutch national press. But many locals still need convincing.

Its not so easy to gentrify an area, Majoor says. All the old must go and all the new and fancy people must be attracted. [The government] knew this would not be easy to do in such a famous, complicated area. But human trafficking and organised crime are things that nobody wants so they focused the debate on that.

When Project 1012 was announced, it quickly became clear that many people would do well out of it except the sex workers. Under the justification of tackling crime, the government forced brothel owners to sell their leases on this extremely valuable real estate. (All land in Amsterdam is owned by the government and leased to landlords.) While there is no doubt that some of the brothel owners were involved in illegal activities much of the red-light district was believed to be controlled by organised crime Project 1012 rewarded everyone, legitimate business owners and suspected criminals alike, with a series of multimillion-euro payoffs.

There are no publicly available figures on how much the government paid for individual buildings, nor for the amount spent on subsidising new businesses to move into the vacated brothels. Justifying the expense, Joris Bokhove, Project 1012 coordinator, said: We try to support young entrepreneurs as much as we can, although our resources are limited. In some cases we have been able to subsidise startups, and real estate partners are willing to lower the rent for the startup period. We connect entrepreneurs with each other to encourage new partnerships, and actively involve them in the development of the neighbourhood.

The only people who didnt get land, money or new opportunities were the women working in the windows the very people Project 1012s anti-trafficking initiative was supposed to benefit. While there have been numerous prosecutions of human traffickers around Amsterdam, only a dozen or so have fallen within the projects remit, yet more than 100 windows have been closed. It suggests that a crackdown on crime or the safety of the sex workers was merely a convenient excuse.

The selloff sent ripples of confusion through the red-light district. Brothel owners began to worry that if they didnt sell immediately, their business would be forcibly shut down at a later date. Suspicion over who was selling and who would hold out became rife, disrupting a tight-knit community that until the 1990s had mainly been run by small, local entrepreneurs. This resilient community was tested a couple of decades ago when a number of eastern European brothel owners (the group most often accused of trafficking) moved into the area.

A number of the Dutch brothel workers I spoke to cited their eastern European counterparts as the real reason for Project 1012. Despite these accusations, its clear that Project 1012 was not just targeting foreign owners; Dutch owners were also approached by the government and pressured to sell their buildings.

Majoor does not condemn the brothel owners who sold up. When you get a huge offer of money, and youre insecure about the future of your business, its very tempting to say yes. She does believe, however, that everyone has underestimated the importance of the windows. Sex workers must have a bigger voice in this discussion, she says. The red-light district is about more than sex, drugs and rocknroll, but the entire neighbourhood is supported by the window brothels.

In April 2015, more than 200 sex workers, led by PIC and PROUD, the Dutch sex workers union, marched through Amsterdams city centre to protest at the demonisation of their industry and the closure of the windows. The largest such protest in Dutch history drew public attention to the potential downside of gentrifying the red-light district. It felt, says Majoor, like a return to solidarity in the area.

Closing the windows makes it harder for sex workers to find work, says Felicia, a sex worker from Romania who runs the popular blog Behind the Red Light District and works in the windows around Oude Kerk, just a few doors down from the PIC. There are a lot of girls in the evening who are already having to walk around, looking for work, because there are more girls than windows now.

Not everyone agrees that the red-light district has a sense of community worth preserving. Dana (not her real name) was trafficked into Amsterdam from Bulgaria in 2008. Six months later, she escaped her captors, but decided to continue working in the windows so she could send money home to her mother and younger brother. We met in a light, airy cafe on the bank of the River Amstel, among perma-tanned locals enjoying the sunshine.

How can these people care about someone like me? Dana asks, gesturing to our fellow customers, one of whom notices and gives us a rather uncertain toast. Working in the windows is just a job. The people who live here dont care about the prostitutes and we dont care about them. They only value us because we bring money into the area. But theres no community here. Unless you call community only talking to other prostitutes because no one else will talk to you.

Despite her dislike of the areas residents, Dana still supports the PICs effort to campaign against Project 1012. She may not like the red-light district, but working there pays the rent on her mothers apartment in Bulgaria. Without steady income from the window brothels, Dana worries that she will either have to work from her own apartment (which would violate her rental agreement) or move to more isolated locations, with fewer customers and less protection from police.

There is palpable resentment among the red-light districts sex workers that the government used the issue of human trafficking to buy up some of the areas most valuable buildings. Women such as Dana who have been trafficked are left wondering why the business owners who allegedly trafficked them are being offered massive payoffs. Dutch organisations working with the victims of human trafficking have condemned the project for making vulnerable women less easy to reach. Meanwhile, residents such as Majoor and Felicia are watching an area they love being parcelled up and sold off, along with its sense of community.

Does Majoor think the protests will stop the selloff? We always will have window prostitution and sex theatres in the red-light district, she says. It will stay a red-light district, only smaller. They want to keep the image of an exciting, enticing city But less scary for fancy people who come here to spend a lot of money.

Companies expect IP theft to rise in the next year, according to a new...