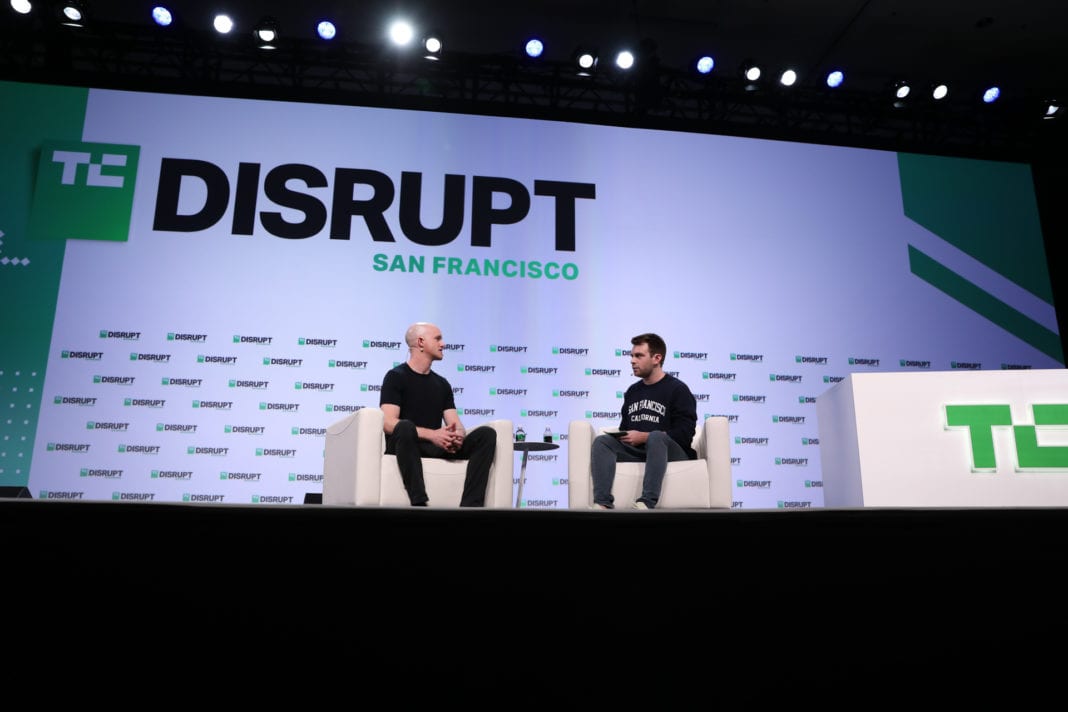 The future of Coinbase looks something like the New York Stock Exchange. That’s according a vision laid out by CEO Brian Amstrong who was interviewed on stage at TechCrunch Disrupt in San Francisco today.

Coinbase is known for being the most popular exchange for converting fiat currency into crypto — most of the largest traded exchanges are crypto-to-crypto — but he foresees a future in which it plays host to a growing number of cryptocurrencies as it becomes standard for companies to create their own token, which runs alongside equity as an alternative investment system.

“It makes sense that any company out there who has a cap table… should have their own token. Every open source project, every charity, potentially every fund or these new types of decentralized organizations [and] apps, they’re all going to have their own tokens,” Armstrong said.

“We want to be the bridge all over the world where people come and they take fiat currency and they can get it into these different cryptocurrencies,” he added.

Brian Armstrong (Coinbase) says crypto regulation will result in the next version of the stock market #TCDisrupt pic.twitter.com/2kyxAmhPSZ

That tokenized future could see Coinbase host hundreds of tokens within “years” and even potentially “millions” in the future, according to Armstrong. That’s a big jump on the five cryptocurrencies that it currently supports today, and it would make it way larger than financial institutions like the New York Stock Exchange, which is actually a Coinbase investor and is getting into Bitcoin, or the NASDAQ.

One of the critical pieces of making this vision a reality is, of course, regulation. This week at Disrupt, others in crypto space have argued that a lack of clarity around crypto regulation is costing the U.S. as innovation and startups are being developed in overseas markets. As the founder of a U.S.-based crypto startup that is valued at over $1 billion and is hiring hard, Armstrong doesn’t subscribe to that thesis but he did admit that there is “a big open question” over whether the majority of the new rush of tokens he foresees will be securities or not.

Still, Coinbase has made moves to add security tokens to its portfolio with the acquisition of a securities dealer earlier this year.

“We do feel a substantial subset of these tokens will be securities,” he said. “Our approach has always been to be the most trusted [exchange] and the easiest to use. So we want to be the legal compliant place where you can start to trade these tokens that are classified as securities.”

“Web 1.0 was about publishing information, web 2.0 was about interaction and web 3.0 is going to be about value transfer on the internet because now the web has this native currency and so applications can be built that instantly tap into this global economy on the internet,” Armstrong added.

How international can crypto become? The Coinbase CEO thinks that the total number of people in the crypto ecosystem can reach one billion within the next five years, up from around 40 million today.

You can watch the full video from Armstrong’s interview below.

Note: The author owns a small amount of cryptocurrency. Enough to gain an understanding, not enough to change a life.

Inspired by nature: the thrilling new science that could transform medicine | Laura Parker

Peak Ventures shores up its second fund for $50 million