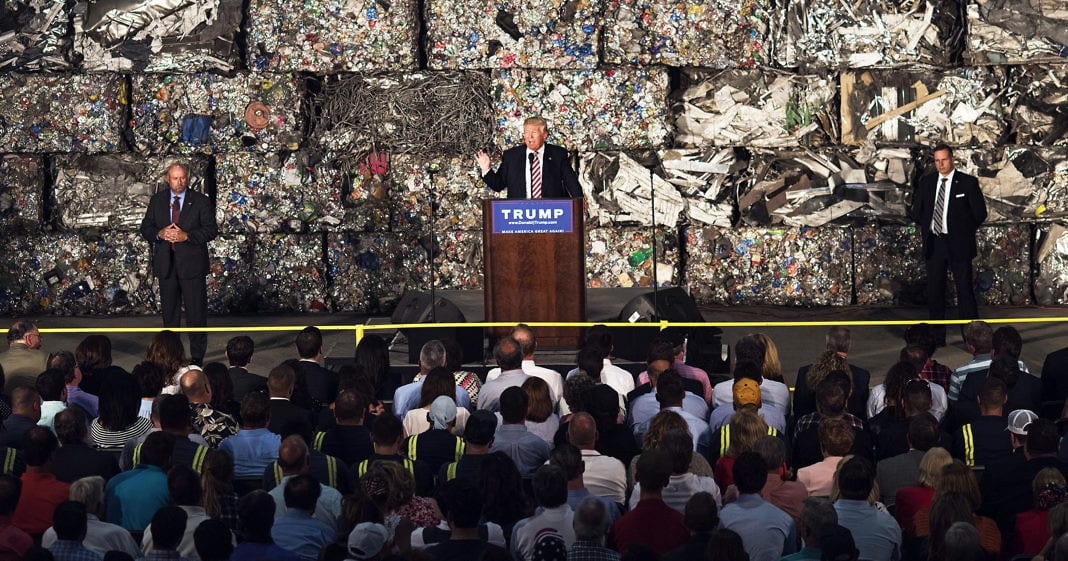 Staging is serious business in presidential politics. Every detail—from the sign on the lecternto the demographics of everyonebehind the candidate to (on one bizarre occasion this cycle) the raw slabs of meatdressing the set—is meant to convey who the candidate is and what the candidate stands for.

So you can learn a lot juxtaposing the optics ofthe campaign speeches Hillary Clinton and Donald Trump gave last week on the future of the economy. While Clinton spoke from the center of a tech hub in Denver, surrounded by millennials tapping away on MacBooks, Trump addressed a crowd inside a scrap metal factory in a Pennsylvania steel town, standing before a wall of crushed aluminum cans.

Before either candidate spoke, they’d cast two opposing visions. In Clinton’s, the economy hinges on investing in technology and the industries of tomorrow. In Trump’s, it depends upon reviving the industries of yesterday. Both aspire to create jobs. But one has a chance of achieving that goal, because history shows that industries survive the future onlyby embracing it.

As Clay Christensen of Harvard Business School noted in The Innovator’s Dilemma, “disruptive innovation” is never without casualties. Businesses close. Industries end. People must adjust. These transitions have, throughout history, sparked economic anxiety and political populism.

But history offers few examples of jobs that have thrived on the methods of the past. When’s the last time you called a travel agent or bought a CD? In the digital age, every industry has had to adapt or die. So while it’s natural to fear the unknown, history has shown it is a mistake to let those fears impact how you run a business—or a country.

While Trump’s economic plan, like his campaign in general, leans heavily on nostalgia for bygone days, it seems he’s learned little from history’s economic transitions. Throughout his remarks on June 28, Trump portrayed US trade policy, including the North American Free Trade Agreement, as a disaster for American workers because it has sent manufacturing jobs overseas. What he failed to note, however, is those same trade deals—and the global supply chains they created—have helped companies like Apple create jobs in the US.

“The people at Apple make a lot of money by building computers, but not because they’re running the manufacturing plant. They’re researching and designing, and managing the supply chain itself,” says Dale Jorgenson, an economist at Harvard University. “All of that is essentially value added in the United States. Its high quality jobs that are very, very important in our economy and are essentially our competitive advantage.”

‘Trade is No Panacea’

As part of aplan to “bring back our jobs” Trump threatened to withdraw from NAFTA if the agreement can’t be renegotiated, a suggestion that even the National Association of Manufacturers and the typically Republican-leaning Chamber of Commerce said would be disastrous for manufacturing companies and their employees.

“Trade is no panacea. Some workers lose their jobs to international competition, just as technological change and shifting consumer tastes regularly put some manufacturers out of business,” wrote John G. Murphy, senior vice president for international policy at the Chamber of Commerce. “But contrary to rumor, the benefits of trade greatly outweigh the costs.”

.@realDonaldTrump should understand 40% of manufacturing jobs are related to exports. We need more exports not less pic.twitter.com/Hp60LeXGMo

Jorgenson says withdrawing from global trade deals would be foolhardybecause nearly everything made today, be it a car or a smartphone, involves a supply chain that spans the world. If American companies were taxed every time they needed materials from abroad, it would drastically increase costs and make them far less competitive.

“Having an inflexible trade regime like we had in the 19th century would be laughable, if not tragic,” hesays.

Even if trade weren’t an issue, Trump’s plan ignores the fact that automation is displacing manufacturing jobs. The giant factories that once employed entire towns increasingly are a thing of the past. Three-quarters of American manufacturers employ fewer than 20 people, according to the National Association of Manufacturers. A Boston Consulting Group report estimated that roughly 25 percent ofmanufacturing functions will be automated by 2025, up from 10 percent last year. That could cut the manufacturing workforce by 22 percent, the report says.

But demand for high-skilled workers to operate that advanced machinery is expected to grow.

Jorgenson says the energy Trump expends trying to bring back outmoded jobs would be better spent exploring how to prepare for the change already underway. “You’ve got to have a lot of startups, and you’ve got to have people trained at the level where they can participate, so they’re able to fit into high quality jobs when they appear,” he says. That, he says, starts with education.

That was the focus of Clinton’s address on June 28, whereshe laid out a plan to expand broadband access, invest in computer science education, defer student loans for would-be entrepreneurs, and reduce regulations for innovative startups. “We need to get back into the future business, because thats who we are as Americans,” Clinton said. “I dont think were people who look backwards. We should be looking forward.”

It’sclear this tech-centric plan would leave some people behind, including the very people Trump wants to court. To be told that the skills you have—skills that once guaranteed a prosperous life—are no longer needed is terrifying. But it’s not half as terrifying as what would happen if the country fails to invest in the future in hopes of holding onto the past.

‘We are offering something people didn’t get before’: inside gal-dem

Cheer up Americans, at least you can get free cheeseburgers in London