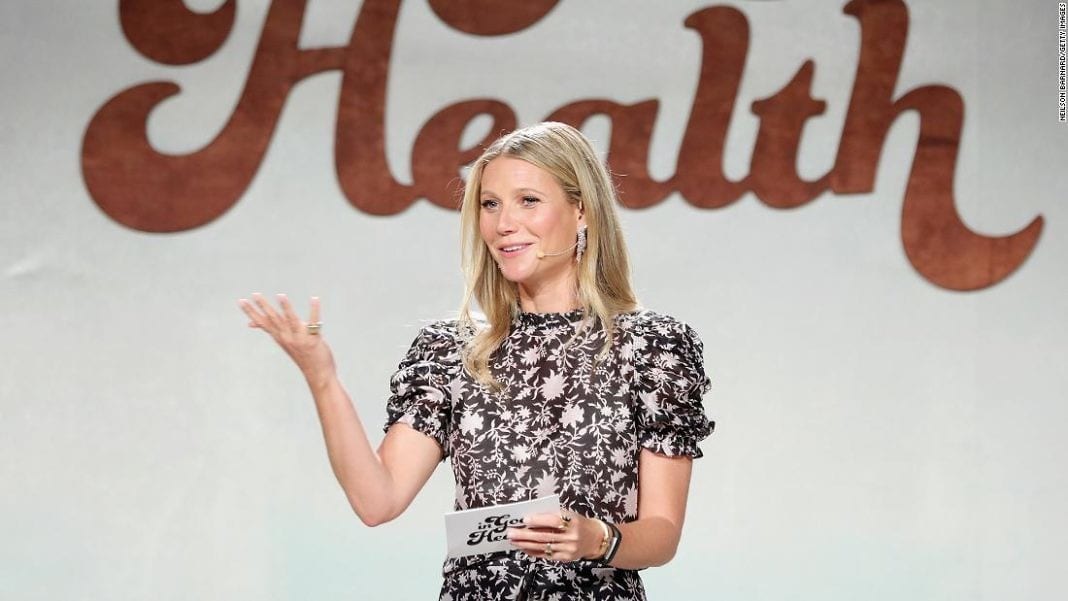 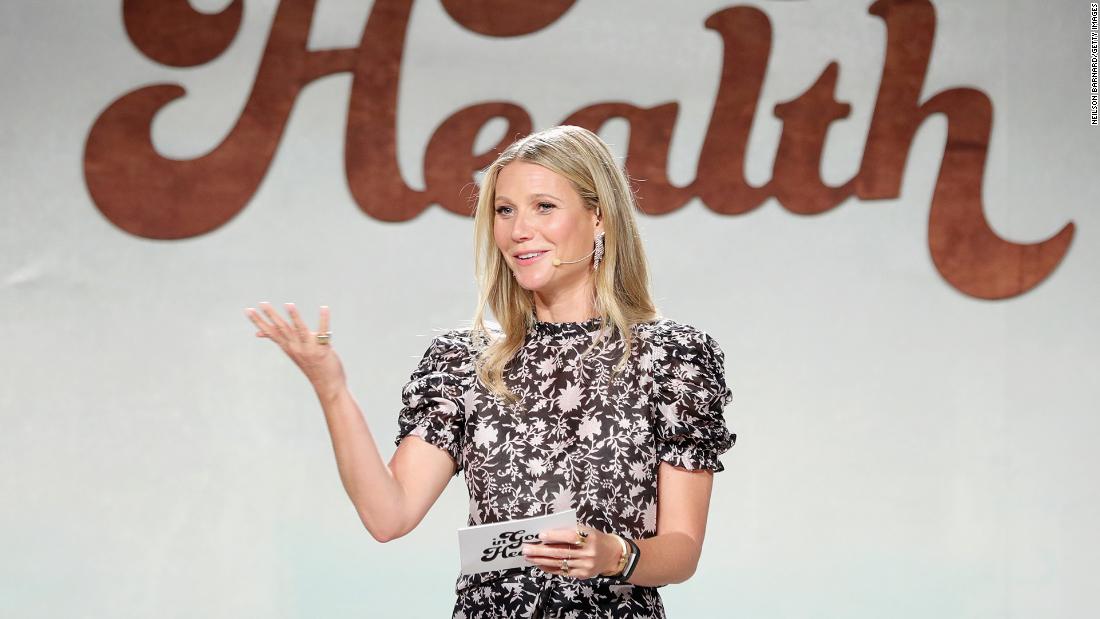 (CNN)In Goop Health, a wellness summit in New York last month, was an unapologetically elitist weekend where about 600 women and a handful of men from across the country paid up to $4,500 for a “Mind-Body-Soul Reset.” 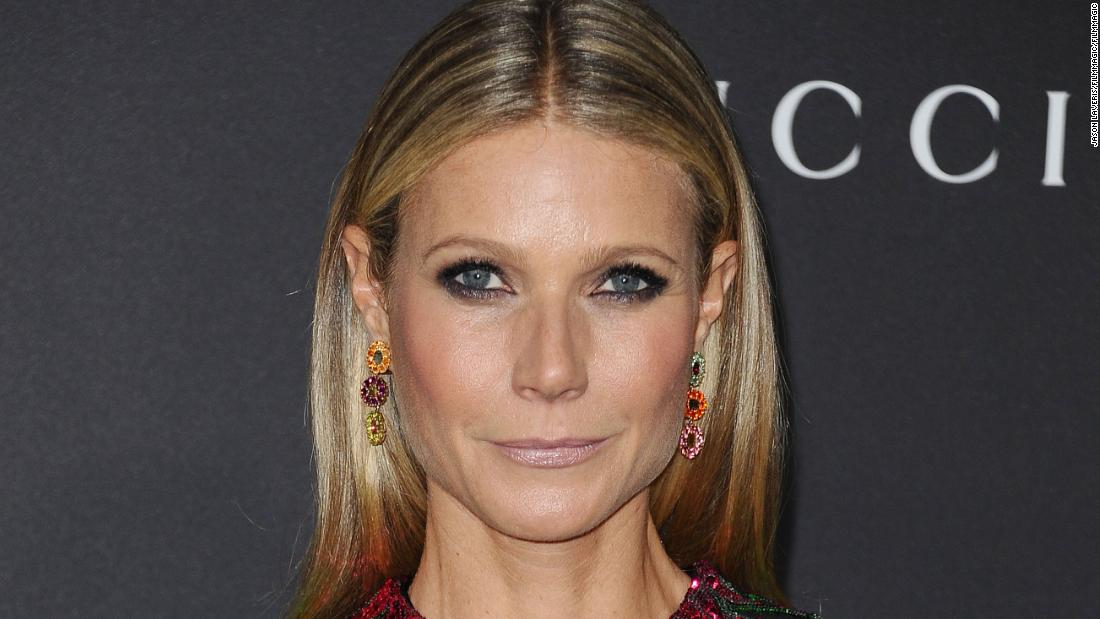 Last year the company was sued for making unsubstantiated claims. Goop settled without admitting liability. Two days after the New York City summit, Paltrow told CNN’s Poppy Harlow, “We didn’t understand that you can’t make certain claims. We didn’t understand about compliance and regulations. We just thought we were writing a blog, you know? And so, it’s been an incredible lesson because also we came to understand the power of our influence and that we carry a great responsibility there.”
Given the frequent negative publicity of some of Goop’s more eccentric recommendations — such as coffee enemas or vaginal steaming — what is most remarkable about the summit is that it was dominated by common-sense health and wellness advice, such as eating fruits and vegetables, getting enough sleep and following your intuition. 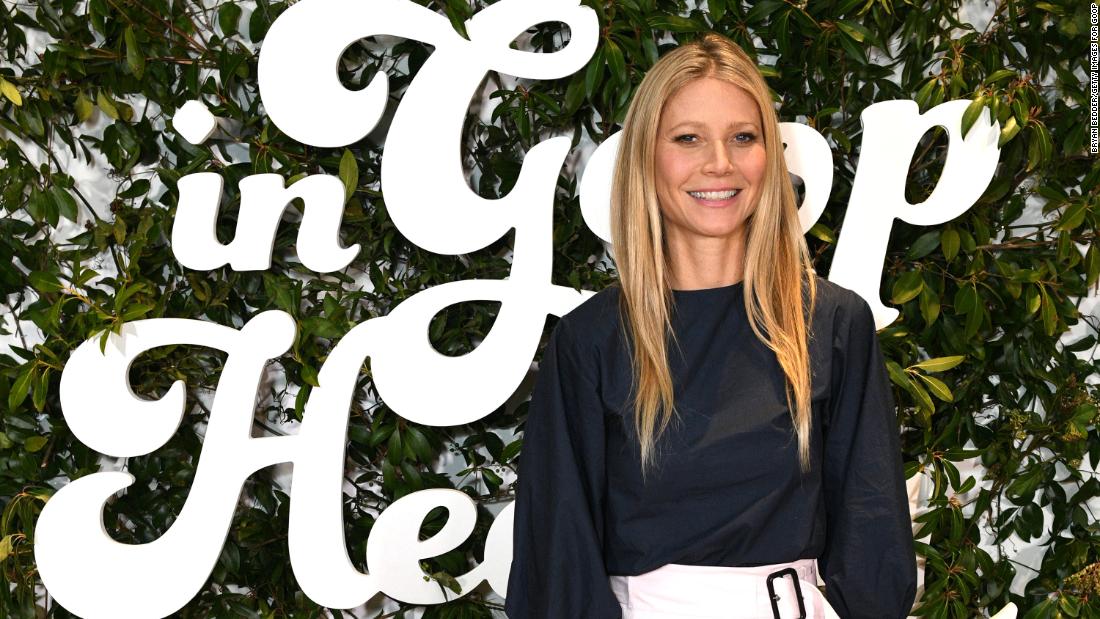 With the allegations of unsubstantiated claims, what makes customers flock to these summits and seek out unproven products? The science behind the placebo effect indicates that Paltrow’s personal brand has something to do with it.
Attendees were able to get their makeup done, take naps in the sleep sanctuary and try ear seeds: vaccaria plant seeds stuck to pressure points on the ear for “a therapeutic effect on the body,” though Goop could not provide any science to support this claim.
Not far from the infrared sauna and the stand offering plant-based meals was a station with bowls of supplements that Goop calls nutritional chews. One named Perfect Attendance, “because only vacation days should compromise your perfect attendance,” included organic tapioca syrup, organic coconut sugar and organic palm fruit oil with dried yeast and elderberry fruit extract. The claims were not reviewed by the FDA, which does not evaluate any nutritional supplements or their claims. 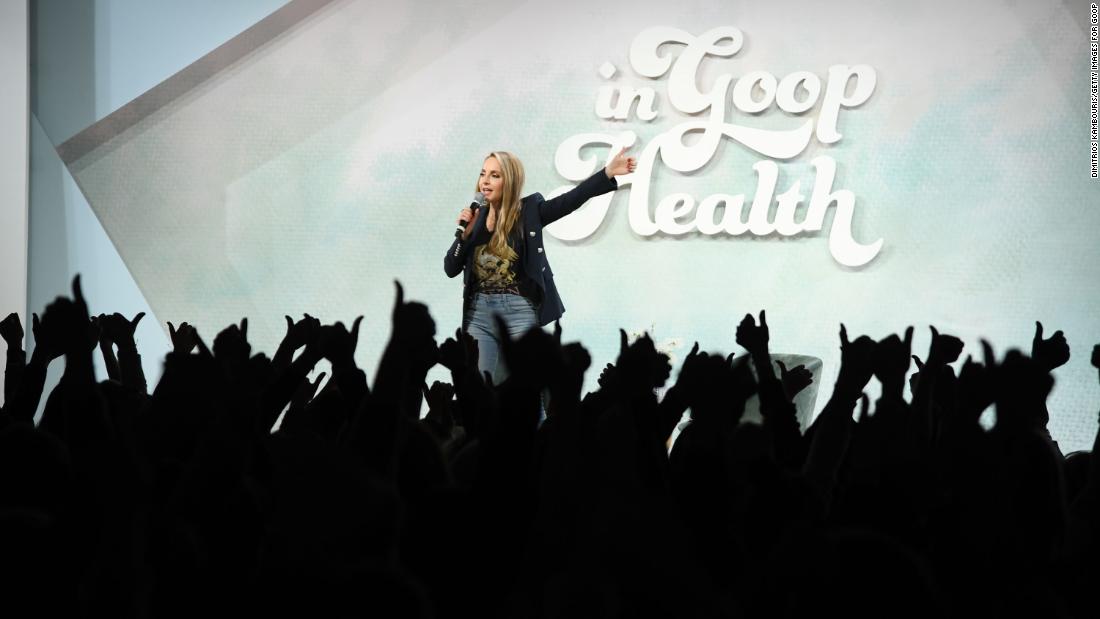 Attendees could also get B12 shots, which are good for blood and nerve cells, although experts say there is little benefit to these supplements unless someone has a deficiency.
There was a line for the injections even though few people could articulate what they were for. A registered nurse who works in oncology, a health policy expert and even CNN political commentator Sally Kohn all got their shots.
“If it was some dude doing B12 shots on the street, I wouldn’t have been like, ‘all right,’ ” Kohn said. “But I trust that it’s somewhat fairly well-vetted of a concept if it’s here.”

“Trust can be critical to the type of therapeutic relationships that are at the core of placebo effects,” Harvard University clinical research fellow and neurologist Dr. Matthew Burke said. “You essentially have to have that … in order to build that positive expectation.”
“If you have a pill given by a doctor versus someone on the street you don’t have trust in, then you will see night and day effects.”
Multiple studies suggest that the placebo effect is a powerful and demonstrable phenomenon Research suggests that even the more esoteric approaches to wellness may produce biological changes to the brain via placebo effects, according to Burke, who was not involved in these studies published in the journals Neuron and Nature Reviews Neuroscience.
Though he has not reviewed all of Goop’s products, he believes that they — and products of similar companies — “could produce very strong placebo effects.” 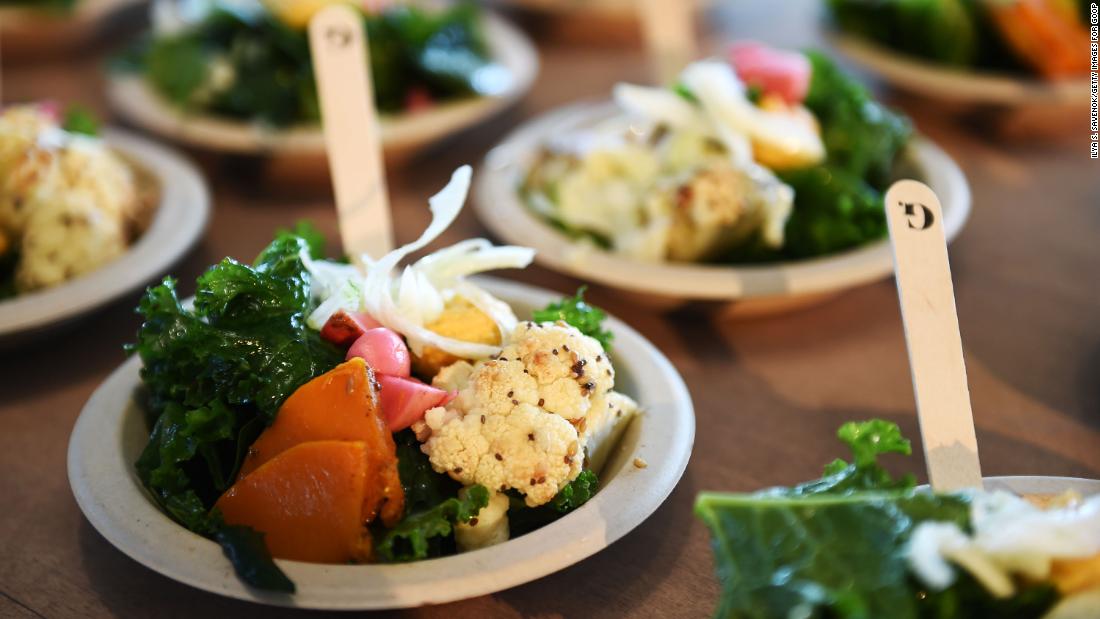 Dr. Jennifer Gunter thinks the way the brand relies on placebo effects, however, is “unethical.” She is a San Francisco Bay-area ob/gyn who attended the New York City In Goop Health summit in 2018.
Gunter has a history of criticizing Goop. In addition to several articles debunking Goop’s claims on her blog, Wielding the Lasso of Truth, her criticism has appeared in the New York Times and Huffington Post.
“The placebo effect is very important when you are selling snake oil because you move from one product to the next, hoping to meet that ill-defined outcome,” she said. “Generally, the placebo effect is temporary. You are in the cult of personality with Paltrow.”

Goop’s success cannot be extricated from Paltrow’s own brand.
On the brand’s website, pictures of Paltrow feature prominently, as do first-person essays about things like her “overnight routine,” endorsing products available for sale on the site. Her personal attendance at the summits is seen a selling point for many.
For the unindoctrinated, the actress can seem like a symbol of unattainable perfection. Goopies, a self-assigned moniker for the brand’s biggest fans, feel differently.
Summit attendees described Paltrow as “real,” “like a girlfriend” and having a “laid-back vibe.” They value what she says and feel a real connection to her.
Many of the attendees were repeats from the previous four summits held in New York City, Los Angeles and Vancouver.
“It’s kind of like a rebirth every time you come here. It’s kind of like, you wash off,” said Glenda Pollack, a two-time summit attendee and 48-year-old stay-at-home mom from Atlanta. “I know it sounds a little kooky.”
The summit largely consisted of panel conversations about relationships, work-life balance and spiritual wellness. There were yoga sessions, breakout groups on nutrition and “mind-focused” workshops centered on career and creativity, the sound but obvious fodder of women’s magazines that can be purchased for less than $5 at a grocery store: Eat healthy whole and organic foods. Buy nontoxic products. Don’t go to bed with your phone. Be organized. 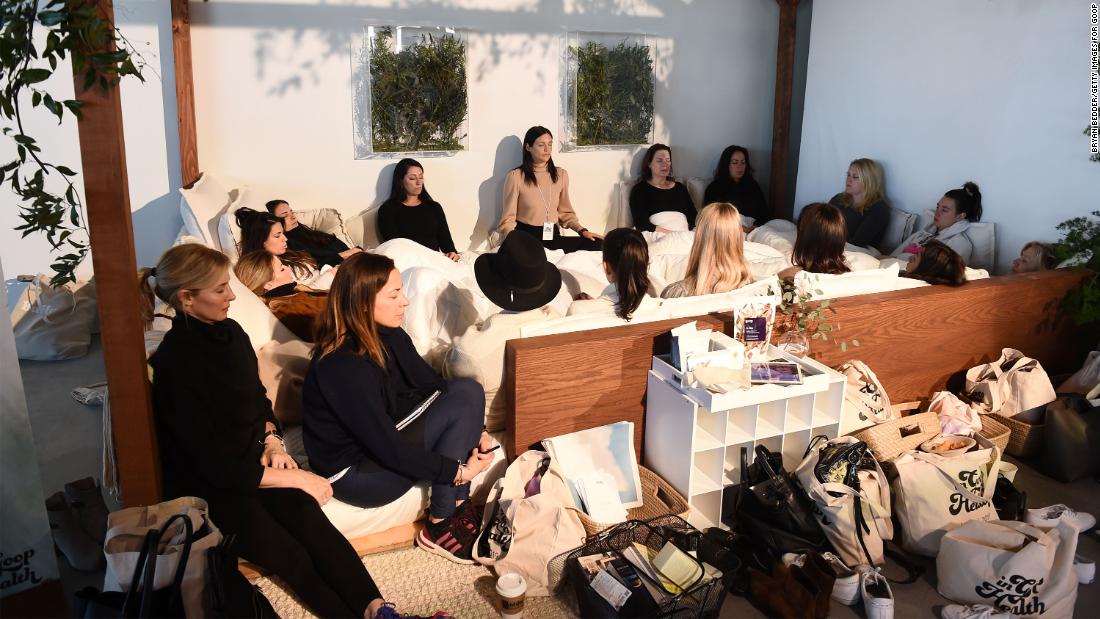 But Goop went beyond the typical advice; it also offered the chance to communicate with the dead. In a room staged like a page from Architectural Digest, with stunning views of Lower Manhattan, psychic and medium Kim Russo wandered between plush beige couches and houseplants, working to decipher whom the spirits wanted to talk to.
Russo says she connected with a spirit that Lauren Lamb, a 38-year-old homemaker from New York City, recognized as her mother, who died in 2016. According to Russo, Lamb’s mother warned, “do not go with the dark floor in the bathroom.” Lamb said she was in the middle of a home renovation using dark floors throughout her house.
Lamb arrived as a skeptic but left a believer. “It felt really good just knowing that she was there and seeing my life.”
Gunter was less enthusiastic, calling the medium “the oldest carny sideshow in the world, branded as wellness.”
Goopies are undeterred. Some people just trust Paltrow.
David Cohen, a vendor at the summit and co-founder of Dream Pops, a plant-based dairy-, gluten- and soy-free ice pop, said he had total confidence in Paltrow’s recommendations. “If she said, ‘David, go see the psychic,’ I probably would.”

Whether there is science behind all of Goop’s approaches to wellness, Burke says, there may still be “meaningful impact” for those who partake.
He defines the placebo effect as “the positive therapeutic responses associated within the context of a treatment.” That means patients experience biological changes in response to the environment or a belief about a treatment rather than the actual treatment itself. More than 100 peer-reviewed studies support his assertion. 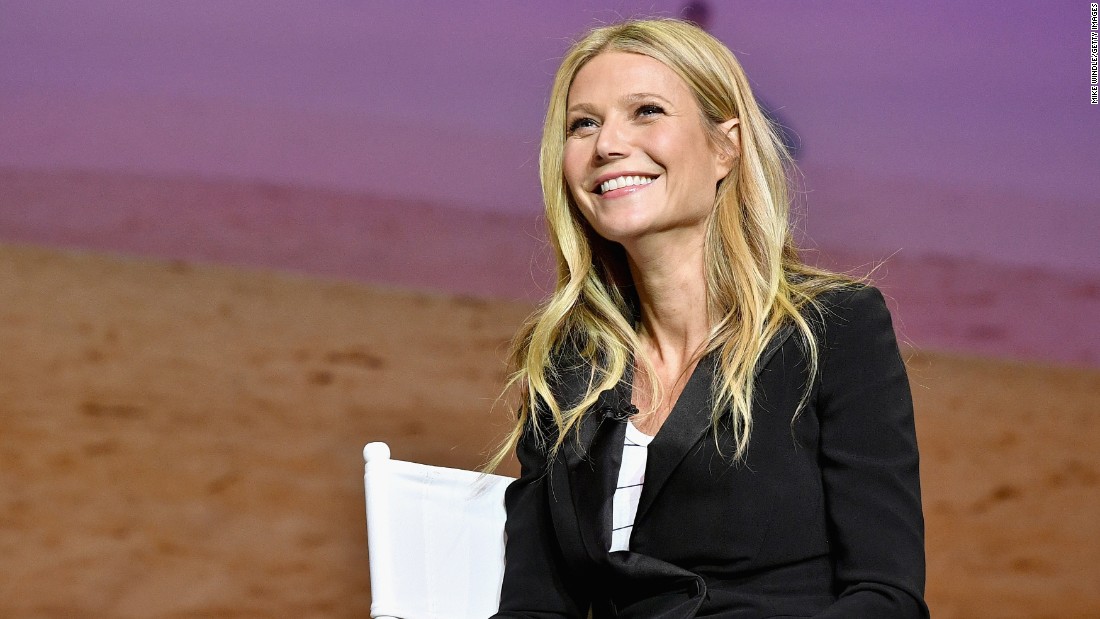 Burke emphasizes that the changes from placebos are real and not imagined or mystical. “It’s becoming clear that placebo effects in themselves are extremely meaningful. If you were to take a placebo during an fMRI scan, we would see specific areas of the brain light up,” he said.
Having someone endorse the effectiveness of a product, fancy packaging and an expensive price tag can all increase the effectiveness of a placebo. In certain clinical settings, these effects have been shown to persist even when people know that they are getting a placebo.
Because of this, Burke thinks the summit could make a positive difference in people’s health. “Absolutely, the summit could legitimately cause biological changes to the brain through the placebo effect.” However, he warns, “this alone should not replace addressing other factors that may be contributing to an individual’s symptoms or given health state.”
Goop has no issue with this possibility. “If it’s the placebo effect, that’s great too,” Chief Content Officer Elise Loehnen wrote in an email.

Although Goop may be improving its customers’ health through conventional science or the placebo effect, some professionals have concerns about the price.
“My concern is that frequently, [summits] are so prohibitively priced that we create the misperception that in order to engage in wellness you have to spend a lot of money,” said Joanne Heyman, former executive director of fashion designer Donna Karan’s Urban Zen Foundation and adjunct professor of international and public affairs at Columbia University. “Thus creating a larger divide between those who have and those who do not.”
Goop pushes back on criticism about elitism. When asked by CNN’s Poppy Harlow at South by Southwest about the price point and Paltrow’s embrace of the aspirational nature of her products, Paltrow responded, “when I talk about aspirational, I don’t mean necessarily price point. I mean aspiring to feeling better is aspiring to maybe using a product that doesn’t have any endocrine disrupters or plastic in it.”

According to the National Institutes of Health, endocrine disrupters are common chemicals that are found in a range of household products including toys, detergents and cosmetics. They may cause adverse effects to the endocrine system, possibly lowering fertility and increasing the risk for some cancers.
This is the kind of sales pitch that might come from a concerned friend, clearly her brand mission, and Paltrow herself continues to make a connection and resonate with Goop fans.
However, it’s a message that doesn’t resonate with Gunter. “You flew to New York and chatted with Gwyneth Paltrow. You spent money on this, and so you are going to feel better with a nebulous outcome.”
The summit attendees are not bothered.
“While some of it may not be scientifically based and I might reject some of those things,” said Susan Griffith, 55, of Nashville, “it’s still fun, and everybody wants the girlfriend that knows about all the latest and greatest things.”