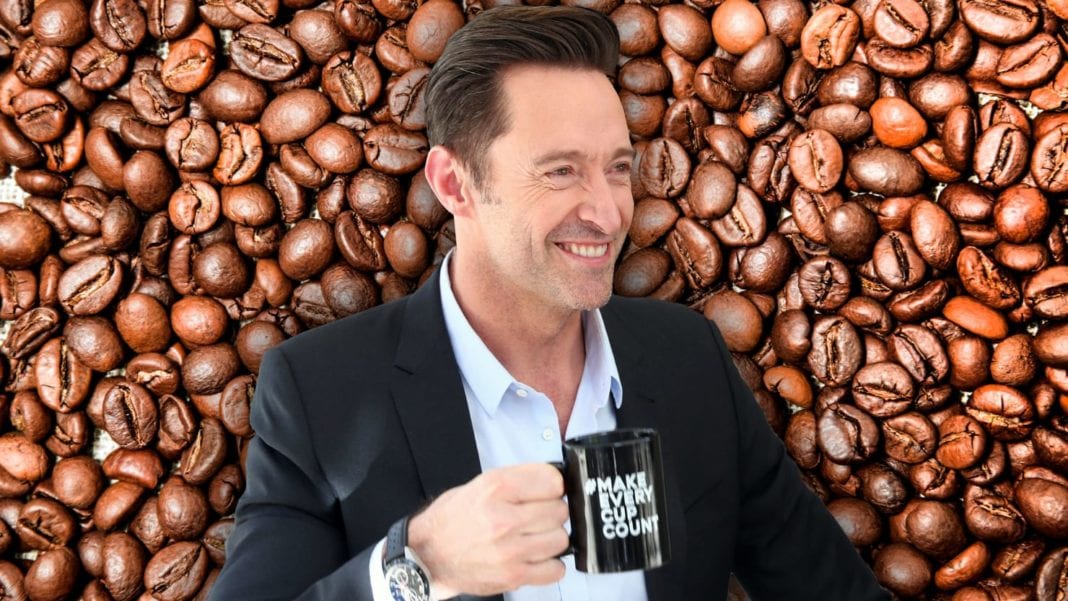 It sounds like the plot of a new X-Men movie: Hugh Jackman is trying to use all of his super powers to help people around the world and save the planet.

But this isn’t a story line, Jackman (not Wolverine) several years ago started the fair trade coffee company, Laughing Man, which helps support coffee farmers. “The moment that things started to happen for me film wise, I was also reading things like Banker to the Poor by Muhammad Yunus, who won the Nobel Peace Prize, and Paul Newman’s Shameless Exploitation in Pursuit of the Common Good,” he remembers. “It struck me that doing a social business was probably the best way to use the profile of someone in my position. So I had that in my head before I know what that business was going to be. I went on a trip with World Vision—we were doing a video about fair trade coffee and the impact that it has on the growers and on the farmers—and from that moment I started to think, OK I have to do something for these farmers and growers.”

He decided to go into business with a friend who had worked in the coffee industry and they launched Laughing Man. Jackman put up half the costs and donates all of his profits to the Laughing Man Foundation that he set up. Last year alone, the charity had 100 projects, including building irrigation systems, sending 40 students to college and paying for roofs, floors and other home improvements. (In fact, for the next 20 days, the company will double the standard amount it donates to the foundation every time a bag of coffee or box of pods is sold.) Laughing Man also just announced that it’s now the first brand in the U.S. to have a recyclable coffee pod.

“We wanted to work out how could we create a business model where we actually were giving back to the growers and the communities that bring us the beans that we drink every day,” he proudly says.

It’s no surprise that Jackman is a big coffee drinker. “I’m Australian. We love it,” he says. “Everyone knows we love beer and things like that but actually Ozzies love coffee. We had a huge influx of immigration after World War II from Southern Europe and so good coffee has been something that we’ve always had and we’re really, really snobby about it.”

“I’m a full-on caffeine addict,” he jokes. He even admits, “every character I’ve ever played weirdly likes the same coffee that Hugh Jackman likes. I’ll only go so far for my art.” Even Wolverine? “Wolverine is just more caffeine because I’m training like a maniac.”

Laughing Man was the perfect fit for him and the company’s new slogan, naturally, is Make Every Cup Count. “I could have 15 cups of coffee a day although someone told me that will kill me, so I don’t,” he explains. “So, I probably have two. Well if I am only going to have two they better be really bloody good.”

Jackman was also inspired by his father who was an accountant at PricewaterhouseCoopers and had the World Bank as a client. After he retired, he spent several years volunteering for an organization that helps business startups around the world and was stationed in Fiji, China and Bangladesh as an advisor. “I grew up with that example,” Jackman says.

However, it’s not quite as easy for him to travel on coffee or foundation business, since he can’t escape his signature X-Men character. “I was in Colombia and the heads of the co-op are there thanking me,” he says. “I’m looking in the eyes of the kids and they’re holding out three fingers and lifting their eyebrows. All they can see is Wolverine. I thought that was totally cool.”

But he quickly adds, “I don’t personally need it. It thrills me I can use my profile for something that is genuinely giving back.”

Cheers To This Keurig-Type Thing That Mixes Cocktails For You In a Matter of...

MIT is reviewing its relationship with AI startup SenseTime, one of the Chinese tech...