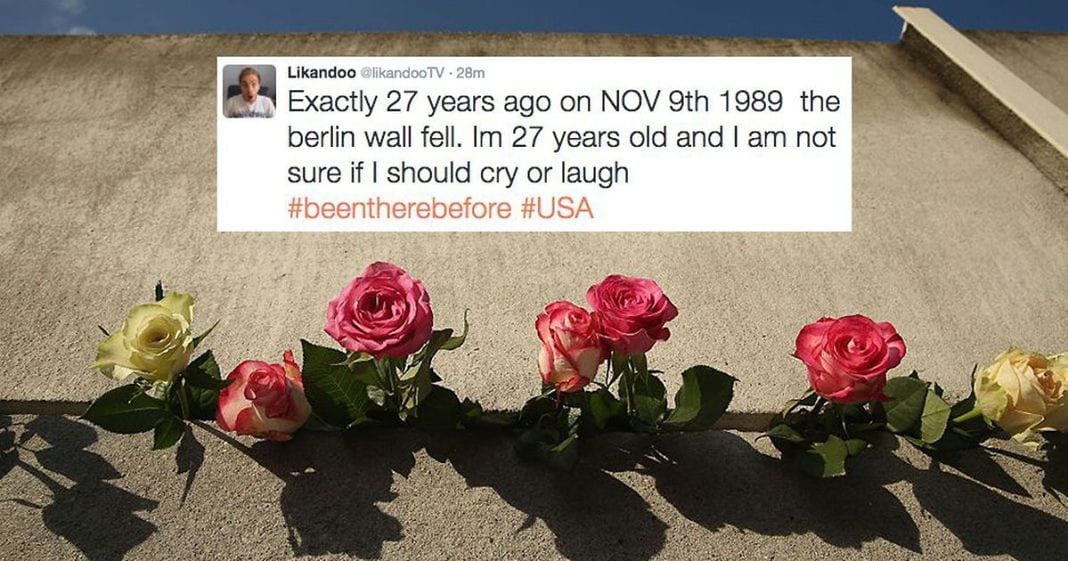 LONDON On Nov. 9, 1989, the world saw the fall of the Berlin Wall, marking the beginning of the end of the Cold War era.

Twenty-seven years later to the day, the world woke up to discover that a man whose campaign centred on promises of a new wall had been elected to the office of the presidency in a nation that had been instrumental in bringing the one in Berlin down.

SEE ALSO: 25 positive tweets for people who are traumatized by the U.S. election

That man is of course Donald Trump, who has pledged to build a wall along the U.S.-Mexico border.

The irony of his controversial pledge coupled with the historical significance of the date of his election has not been lost on Twitter:

Exactly 27 years ago on NOV 9th 1989 the berlin wall fell. Im 27 years old and I am not sure if I should cry or laugh #beentherebefore #USA

Ironic that today marks the 27 year anniversary of the Berlin wall coming down, and the USA elects a President who wants to build one

The irony of today being the 27th anniversary of the fall of the Berlin wall has only just hit me and I feel like screaming.

27 years ago the Berlin Wall fell, I remember my grandma in Berlin calling us… crying of joy. Let us tear down walls, not build them!

The fall of the Berlin Wall symbolized the end of an economically and socially divided Europe heralding a period of enormous growth, but 27 years later, have we reaped what we have sown?

The reality of globalization, for all its benefits, has simultaneously ushered in a world where anti-immigration sentiment and protectionist tendencies have been increasingly mainstreamed, evidenced by the appeal of populist politicians like Trump.

Crashing markets indicate global unease at what a Trump presidency will mean in terms of America’s future relationship with Mexico, Europe, and the rest of the world. Whether Trump follows through on his promise to construct a physical structure or instead opts for a policy design that isolates the U.S. from the world, post-Cold War euphoria has long since subsided and people are thirsting for change.

Where to next? Like it or not, it will be a President Trump that leads the way.