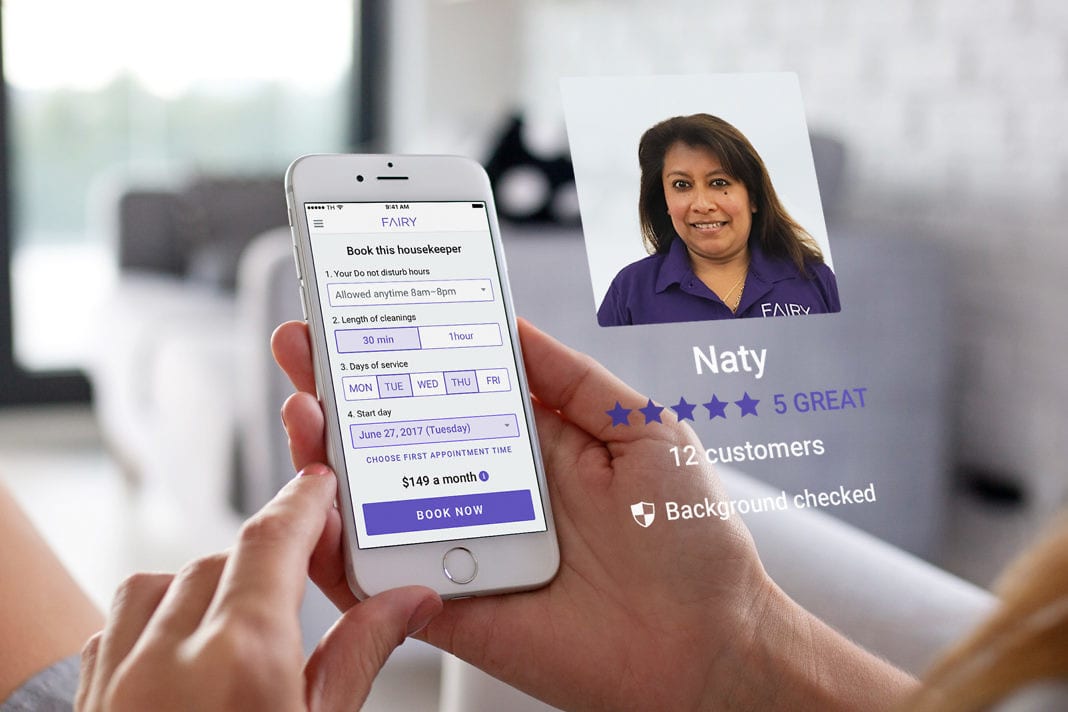 A startup called Fairy wants to change the way consumers get their homes cleaned. Perhaps counterintuitively, the company is betting that by providing frequent, hotel-like housecleaning, it can actually lower the cost and provide a higher quality of service.

Pricing for Fairys service starts at $149 a month for twice-weekly cleaning sessions of 30 minutes each. But clients can make cleaning more frequent up to five days a week or increase the length of each session for slightly more per month.

Fairy was founded by Nitin Gupta and Avlok Kohli.Gupta was most recently a managing director within Boxs sales team, but prior to that he had founded a company called LawPivot, which provided a marketplace for answers to legal questions and was acquired by Rocket Lawyer. Meanwhile, Kohli was founder of a company called Fastbite, which was acquired by Square and led to him becoming a part of the Caviar leadership team.

Of course, the tech ecosystem is littered with the remains of housecleaning startups that were unable to figure out a profitable business model. But the Fairy team believes it can make the cleaning process more efficient in a few ways: First, more frequent cleanings means less work needs to be done each time.

But the real trick in Fairys business comes from creating areas of client density and reducing the travel time its housecleaners have between cleanings. By ensuring that clients are limited to a certain neighborhood and in some cases even in the same building its housecleaners can serve more customers and squeeze more sessions into a day. The founders say a neighborhood usually needs at least five clients signed up for multi-week cleanings before it makes sense to refer a housecleaner to that area.

According to Kohli, a business like Fairys can be run profitably if you set up the foundation and get the core economics right before expanding into a dozen markets. With that in mind, the company has been operating in San Francisco since early 2016, and it began limited service in New York City late last year.

Some of the logistics work Kohli is using is borrowed from his time in the food logistics space, like splitting cities into zones to optimize travel time and ensure that theres enough work for housecleaners to do.

On that front, Fairy provides a more stable and predictable work schedule for cleaners, who still get to choose which clients they want to work with. And since every client is different, Fairy doesnt prescribe a certain way for cleanings to be done instead it leaves that up to client and service providers to figure out what is most important to be taken care of.

Another way Fairy believes it can lower costs for itself and its cleaners is by not defining what supplies to use. Rather than requiring housecleaners to lug their own equipment or supplies from one building to another, the companyasks clients to stock up on whatever cleaning materials housecleaners might need to get a job done.

The folks at Fairy believe that by making supply purchasing and replenishment an add-on to its cleanings, it could lower the cost of the service further over time. But thats for the future! For today, the company is officially launching its service and making it more widely available to customers.

Nobody likes this bodega startup that aims to replace bodegas

And the winner of Startup Battlefield Europe at VivaTech is Wingly

How to understand the financial levers in your business