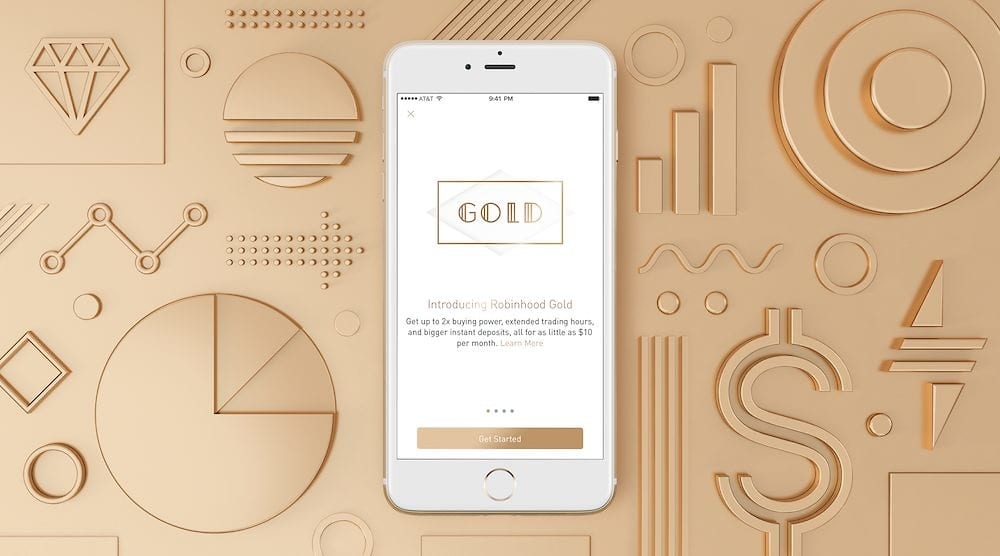 Robinhood says it will never charge commissions to trade stocks, but the $66 million-funded startup is finally ramping up monetization with the launch of Robinhood Gold premium features. For $10 per month, users can skip the three-day waiting period with instant deposits and reinvesting, trade 30 minutes before and 2 hours after the market is open, and borrow up to double the money in their account to trade on margin with leverage.

The basic zero-fee trading appeals to younger, less wealthy, less experienced traders who make small investments where the $7-plus commission fees charged by competitors like Scottrade and E*Trade could eradicate their potential gains.

Thats nearly as much as Robinhood charges for its Gold subscription, whichcould lure veteran traders from those services. That could in turn bring in larger balances which fuel the original way Robinhood makes money interest on cash people store in their account.

Robinhood Gold is to our core product as Amazon Prime is to Amazon says Robinhood co-CEO Baiju Bhatt [Disclosure: We were friends in college]. It makes it better in a consistent way for people who use the product a lot. At first, Robinhood Gold will roll out to about 15% of the apps user base, and extend from there to other qualified users after testing.

Gold users wont have to wait three days for the ACH transfers to process when they fund their Robinhood balance from their bank account, or when they sell stock and want to buy more stock with the proceeds. Pre- and post-bell trading gives smaller investors an option to trade on after-hours news like earnings reports. Trading from 9am to 9:30am when markets open and from 4pm to 6pm after they close was typically reserved for big institutional investors.

The most important premium feature, though, is additional buying power. which Bhatt calls basically a credit card for the stock market. As long as users have at least $2,000 in their account, they can borrow up to 2X that amount for $10 per month and trade with it.

Robinhood is also selling higher-priced subscriptions with more buying power: $4000 for $20/month, $6000 for $30/month, $10,000 for $50/month, and buying power up to $50,000 at a 5% interest rate. There are some restrictions on risky buying behavior, so you cant dump thousands into a newly IPOd company, leveraged ETFs, or stocks priced under $3.00 because theyre too volatile.

Now the question is whether traders interested in these advanced options are ready for a mobile-only trading app. Bhatt expects Robinhood Gold will be the startups primary revenue source.

The income could help Robinhood make good on the $66 million in funding its taken from Andreessen Horowitz, NEA, GV (Google Ventures), Index, Slow Ventures, and celebs like Nas, Snoop Dogg, and Jared Leto. Robinhood is looking like one of the top portfolio companies for Rothenberg Ventures, the disgraced fund that recently changed its name to Frontier Tech Ventures.

Founded in 2013 by two Stanford grads whod built high-frequency trading tech for big hedge funds, Robinhood now has over one million registered users. Itshandled $12 billion in transactions and saved people over $200 million in commission fees. The app is hockey-sticking, with transaction volume doubling just since June.

Yet Bhatt laughs that The oldest question people have about Robinhood? How are you ever gonna make money?’ The startup had until now focused on democratizing stock trading by making it affordable to everyone, not earning money for itself.

Robinhoods mobile nature makes it tempting to impulse-buy stocks which could get people in trouble if theyre trading on borrowed credit via Gold. Bhatt is cognizant of the risk, saying We want to help people make decisions that theyre comfortable with and that they understand. Otherwise, who would want to come back to an app where they lost a ton of dough?

And since Robinhood is storing peoples money, the startup has to be extraordinarily vigilant when it comes to security. A breach could scare customers away to more established brokerages.

Down the line, Robinhood plans to build a web product to complement its mobile-first apps, and will keep adding features to Robinhood Gold. For now, its software will keep eating stock trading, replacing brick-and-mortar brokerage offices with apps, and sharing the savings with its users.

Innovate? Big tech would rather throw us a broken Samsung Galaxy Fold | Charles...