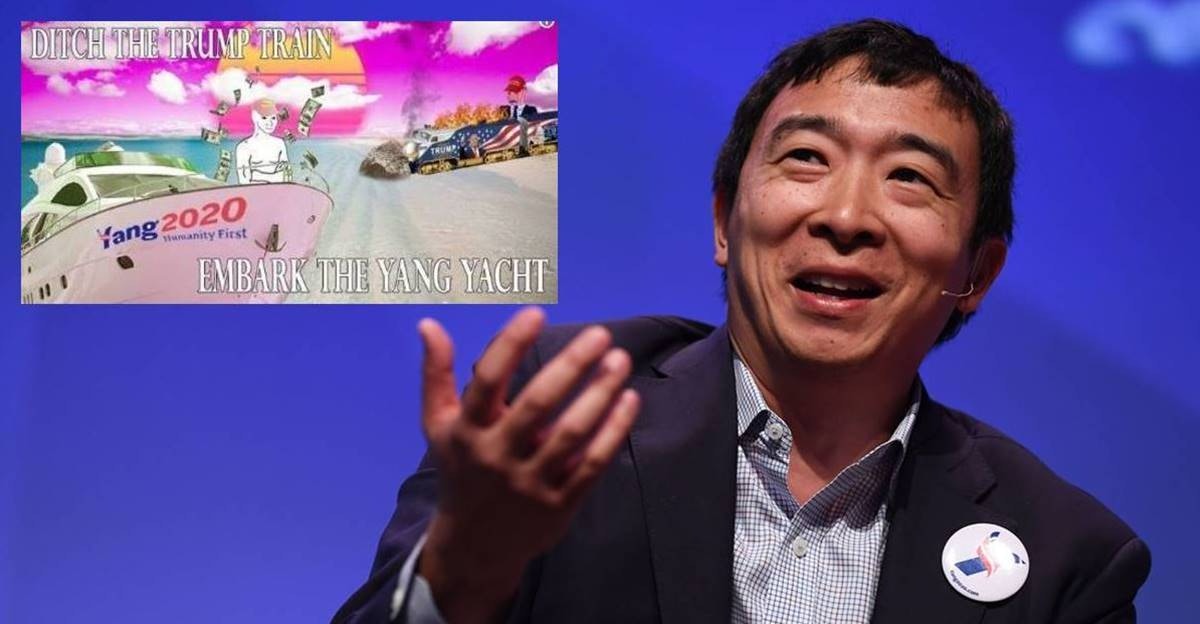 In the 2016 election, Donald Trump was, by far, the most meme-worthy candidate. Trolls on sites such as 4Chan and Reddit’s r/The Donald championed Trump as an ironic savior while the alt-right churned out countless disgusting, racist memes using Trump’s image.

However, in 2020 it looks like the ‘sh*t-posters’ of the world are jumping off the Trump Train and getting on the Yang Yacht. The political outsider is also gaining legitimate support from Democrats for his forward-thinking policies.

#YangGang Goals:
1. Spread our message as far as it can possibly go. Reply to tweets, post on Facebook, tell your friends irl, etc.
2. Make memes to support the cause.
3. Donate if you can (think of it as an investment.)
4. Attend live events when we are at that point. pic.twitter.com/wel9enLACa

Andrew Yang, 44, is a former corporate lawyer who switched to startups and later launched the nonprofit Venture for America, which seeks to “to revitalize American cities and communities through entrepreneurship.”

His presidential candidacy has been gaining legitimate traction in the crowded 2020 Democratic field by focusing on a future where automation and artificial intelligence may lead to mass unemployment. His supporters are known as the “Yang Gang.”

His signature proposal to help people through the impending economic catastrophe is a universal basic income (UBI) which he calls the Freedom Dividend.

Yang’s UBI policy would give every American adult $1,000 a month to do as they choose. The idea is gaining sincere support from some liberals, but it’s also made him the favored candidate by some on the far right.

“It’s uncomfortable,” Yang told The New York Times about his far-right supporters. “They’re antithetical to everything I stand for.”

The candidate’s forward-looking policies are also seen as a respite from decades-old debates on Baby Boomer topics such as abortion and guns.

Yang is even working on creating a lifelike 3-D hologram of himself that can be projected on the back of a flatbed truck. “It’s a way for me to be in two places at once,” he said.

The candidate has even acknowledged an unofficial Yang 2020 slogan that has cropped up online. “Secure the bag” is a term used by supporters to hold the course and get that sweet $1,000 a month check.

Traveling with my staff, I told someone to secure the bag.

Here’s a small sampling of the countless Yang Gang memes popping up online.

This meme template has been one of my favorites since it was first created.

A key point made here too about how conditional welfare punishes work while unconditional basic income removes that disincentive. >70% marginal tax rates on recipients is not a work incentive.#YangGang pic.twitter.com/OMpWAUVX9X

Keep pushing @AndrewYang and this idea that we all need will catch on! Keep retweeting and supporting to give our candidate the recognition he deserves! #YANGGANG #Election2020 pic.twitter.com/57iuYrClKh

$1000 a month from 18 to 65 is $564,000. I’m not sure I can ever give my children a better foundation of financial security for their lives.@AndrewYangVFA #FreedomDividend #YangGang pic.twitter.com/CDGOfygfjN

I was going to see @captive_state this weekend but saw this instead. A blockbuster by #YangGang productions pic.twitter.com/yXFgC3NAaD

The Freedom Dividend should ultimately replace existing welfare systems, something akin to Milton Friedman’s negative income tax. It could take time to get ther

BUT WE NEED TO SECURE THAT BAG BEFORE ANYTHING

That’s all the other candidates want to do unfortunately. We need transformative solutions to fix the problems of the future, not more empty rhetoric. #YangGang #Yang2020 #HumanityFirst pic.twitter.com/VHXVlBEUMx

Some are switching to Yang after being disappointing by Trump.

The time for shallow right wing populism is over, the time for transhuman ascendancy has come. #YangGang #Yang2020 pic.twitter.com/J8yMjMfADk

How to see another companys growth tactics and try them yourself

Tour and activities marketplace Zozi lays off 30% of staff

What Are Startups Afraid of? The Answers Say a Lot About Tech