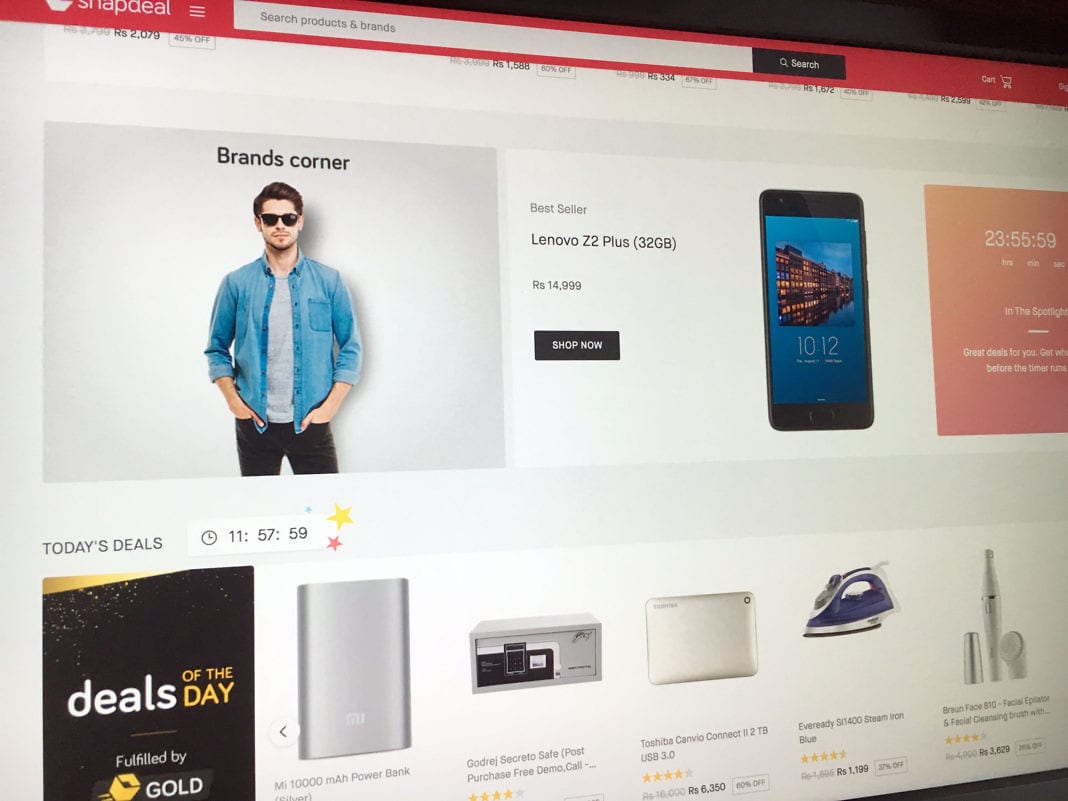 Snapdeal, one of Indias bigonline marketplaces connecting sellers of a range of goods with consumers looking to buy them, is feeling the pinch of competition from Flipkart, Amazon and a host of startups that have emerged withthe rise of e-commerce in the country. The startup backed by the likes of eBay, Alibaba and Softbank and last valued at $6.5 billion issued a statement today confirming that it is laying off staff as part of a bigger restructuring.The company has not specified the number of people or other details of what will be cut, but TechCrunch understands from sources close to the company that layoffswill be between 500 and 600.

On our journey towards becoming Indias first profitable e-commerce company in two years, it is important that we continue to drive efficiency across all parts of our business, which enables us to pass on the value to our consumers and sellers, said a spokesperson in the statement. We have realigned our resources and teams to further these goals and drive high-quality business growth.

The cuts will happenacross all of Snapdeals operations, the company told TechCrunch. These include the Snapdeal marketplace, online payments division FreeCharge and logistics operation Vulcan Express.

They are part of a bigger restructuring that could also include selling all or a part of FreeCharge. Indian publication Business Standard says that Naspers is in the running to buy FreeCharge for $300 million not a great price, considering that Snapdeal acquired FreeCharge for $400 million in 2015. Snapdeal declined to comment to TechCrunch on the sale of FreeCharge.

The turn of events today is the latest stumble for Snapdeal, which was founded in 2010 byRohit BansalandKunal Bahl. The upstart company hasbeen spending aggressively to compete for customers in India, and it has been spending heavily as it tries to diversify into different lines of business like logistics and payments and new sales categories like cars and homes to offset the low-margin but high volume business of selling consumer goods.

Snapdeals biggest competitors includeFlipkart which is reportedly courting new investment of $1.5 billion on a valuation of $10 billion-$12 billion and talking toWalmart, Microsoft (which announced a strategiccloud partnership with Flipkart this week), eBay, PayPal, and Tencent.

Another big rival is Amazon, which has redoubled its efforts to grow its business in India, after committing $3 billion ofinvestment into the country in 2016 and subsequently launching a host of services like its sticky Prime loyaltyprogram.

The bigger picture is that, as internet penetration continues to rise in the country by way of smartphones, and peoples standard of living and disposable income continue to improve, India has become a very hot and fast-growing e-commerce market.

This has given rise not just to a wave of startups catering to every consumer need, but also a large amount of finance, especially from abroad, as investors hope to get in on whatever will be the next big thing in this huge country.

But while Flipkart is reportedly now pushing a $16 billion valuation, not all boats are being lifted by that tide. There have been many casualties and consolidations, and Snapdeal (which has always been smaller) has found it hard to keep up. The company is reportedly looking at a down roundlower than its $6.5 billion valuation for its next fundraise, whichin any case has not closed.

Factor Daily, citing reporting from local publication Mint, notes that the company has only about 8-10 months of runway left out of its cash coffers of $208 million $238 million. Asked by TechCrunch, Snapdeal would not comment on the state of its latestfunding, or its runway. We are adequately funded, a spokesperson told TechCrunch.

Snapdealis not disclosing revenues, user numbers, or how much staff is now working at the company. It said that previous cuts it made have led to EBITDA increasing by 40% in the first nine months of this financial year.

The efficiency gains arise from many business process & operations optimization initiatives, which has led to 35% lower delivery costs, 75% lower data hosting costs on account of Snapdeals deployment of its private cloud solution, and 25% lower company fixed costs, it said.

Should You Bank Your Own Blood? Actually, Yeah