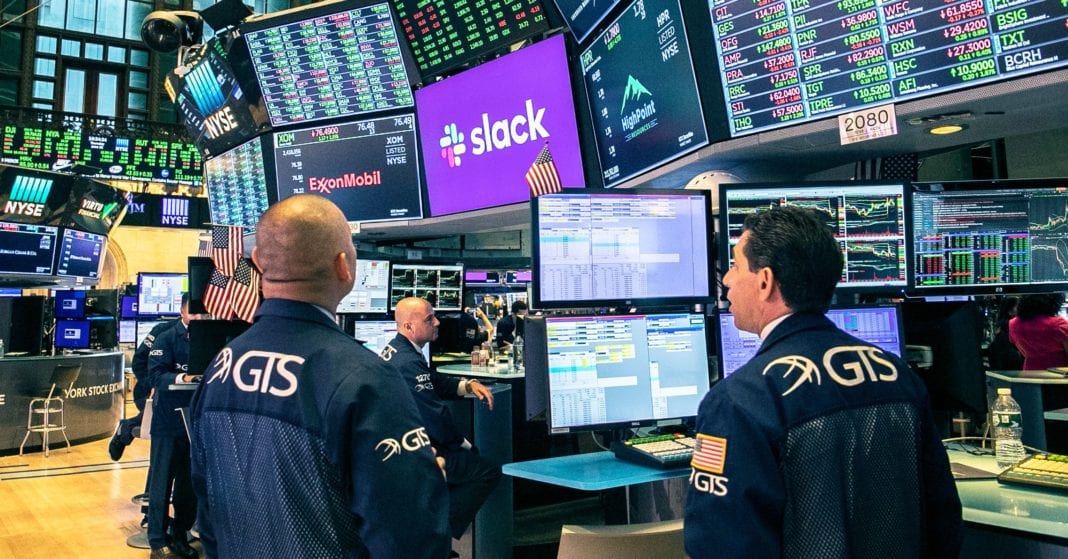 It's official: Investors love Slack. The workplace chat company went public Thursday through an unusual direct listing, where it simply made its shares available on the New York Stock Exchange, without bankers. Slack shares closed at $38.62, nearly 50 percent above the “reference price” set a day earlier, valuing the company at $19.47 billion.

Of course, investors, always a fickle bunch, could easily fall out of love with Slack. Slack has yet to turn a profit, and it faces competition from Microsoft's chat service, Teams, which is included with Office 365, Microsoft's flagship workplace-productivity offering, as well as smaller competitors like Flock and Mattermost.

But Slack's public listing followed two less hyped, but likewise successful, business-to-business IPOs: video conferencing company Zoom in April and network and security company Fastly in May. Together these IPOs suggest that even as the consumer tech market is dominated by Apple, Amazon, Facebook, and Google, companies that sell to businesses can still find ways to compete with the big guys.

When Slack launched its chat app in 2013, its most direct competitor was HipChat, made by Atlassian, which had its own successful IPO in 2015. Slack usage soon surged past HipChat usage, and Atlassian shuttered HipChat last year to focus on other products. But it also competed with numerous other workplace communication tools, from email to corporate social networks to old fashioned intranets. Zoom goes head to head with Cisco's well-entrenched WebEx. Fastly found a market despite competition from the likes of Akamai. It's hard to find similar examples among consumer tech, where new competitors tend to either sell out to the big four or remain perpetual also-rans.

For example, Facebook bought Instagram and WhatsApp before either app could pose any real challenge to Mark Zuckerberg's empire. In 2010, Facebook rolled out Check-In, which was similar to then up-and-comer Foursquare. The service didn't work out—but then again, Foursquare didn't exactly end up being a real Facebook rival either. More recently, Facebook added the Snapchat-like Stories feature to Instagram and the similar feature Lens to the traditional Facebook service. As online dating sites like Tinder or Bumble become a common way for people to connect, Facebook has rolled out dating features in certain countries.

There's plenty of merger and acquisition activity in the business-to-business market, some of it driven by the cloud divisions of Google and Amazon. But the apparent success of Slack, Zoom, and Fastly shows that selling out isn't the only option for business-tech companies.

One trait the three have in common is their business model. None requires prospective customers to go through a complex sales process to start using their products, or a big sales team to sell those products. Slack and Zoom offer free versions that anyone can start using immediately. You only need to pay when you start needing large numbers of users or advanced features. You can sign up for Fastly with a credit card, without talking to a sales representative. This made it easier to build buzz, especially with startups. Perhaps more important, the low barrier to entry made it possible for individual employees, or teams of employees, to start using the services, often in place of a product that someone else in their company had purchased.

Beyond the IPO set, other companies are using open source software to take on business-tech giants. Docker, for example, offers its alternative to traditional "virtual machine" software offered by the likes of VMware and Citrix for free, allowing developers and other techies to experiment and build products with it before ponying up money for services, support, or proprietary software. Likewise, cloud management software companies like Chef, Puppet, and HashiCorp are taking on companies like BMC with open source software.

Of course, the products and services these companies offer have to be appealing enough that employees ultimately will band together to convince their bosses to pay. Slack did that by making a workplace chat app people actually liked using, even if there were cheaper or arguably better options on the market. HashiCorp and similar companies beat the big guys to the market. But they got their chance by going straight to the people who use their technology, instead of purchasing managers.

Innovate? Big tech would rather throw us a broken Samsung Galaxy Fold | Charles...