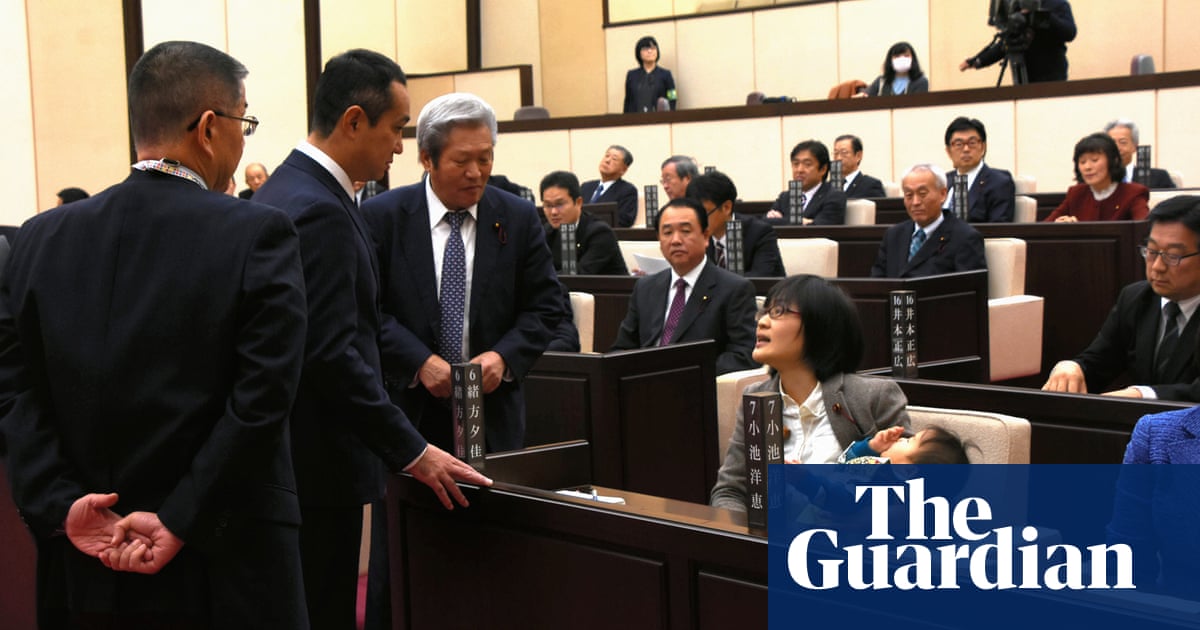 A Japanese politician who was forced to leave an assembly chamber last year after her colleagues objected to the presence of her seven-month-old child has been thrown out again for speaking while eating a cough drop.

Yuka Ogata, a member of the Kumamoto city assembly in south-western Japan, was ordered to leave the chamber last Friday after she refused to apologise for the incident – a move she believes is part of a campaign to frustrate her attempts to make the council more family-friendly.

She claimed that attitudes towards her had hardened since she took her child into the assembly last November. She had earlier asked for permission to breastfeed him in the chamber, or for daycare to be provided in the assembly building for the children of councillors, staff and visitors – requests that were rejected by the council.

“Many of the other councillors have openly criticised me, implying that I’m not a good mother, or claiming that many citizens think it’s outrageous to provide daycare services for council members with young children,” Ogata told the Guardian.

“They felt bad that their outdated attitudes had been exposed and criticised in public. Ever since then, they have tried to portray me as someone who behaves selfishly and unreasonably.”

In March, the assembly decided to restrict non-members’ admission to the chamber in response to Ogata’s actions.

While there is no ban on eating and drinking in the chamber, Ogata’s critics claimed she had damaged the assembly’s integrity by addressing other members with a lozenge in her mouth.

“A lot of the people have misunderstood this as an issue related to my behaviour, which is how it has been reported in the media,” she said. “This is part of a struggle between me and other councillors, most of whom are older men, to make the council more relevant to the everyday lives of ordinary people.”

Ogata was speaking at the podium when the chairman, Shinya Kutsuki, asked her if she had something in her mouth. She explained that she was sucking a lozenge because she was suffering from a cold and did not want to disrupt proceedings by coughing repeatedly.

The session was suspended while assembly members voted in favour of forming an ad hoc committee to decide how to discipline her. It composed an apology and demanded that she read it out. When Ogata refused, the committee reconvened and the chamber voted to suspend her for the rest of the day. The incident held up council business for eight hours.

“It is unacceptable for a responsible adult to ask questions with a cough drop in their mouth,” said the mayor of Kumamoto, Kazufumi Onishi, according to Kyodo News. “She needs to admit that she was at fault.”

Ogata took her infant son to a session of the assembly last year to highlight the difficulties many parents in Japan – particularly women – face trying to juggle work with raising children amid a shortage of nursery places.

“I saw it as my best chance to move forward with the policies I have devoted myself to ever since I became a councillor in my home city: to improve childcare provision and make Japan’s working environment more family-friendly,” she wrote in the Guardian.

The number of children on waiting lists for state-funded daycare increased for the third year in a row last year, raising doubts over government plans to provide a place for every child by April 2020.

Mamoon Hamid is heading from Social Capital to Kleiner Perkins

Catching up with startup advisor and Wealthfront CEO Andy Rachcleff