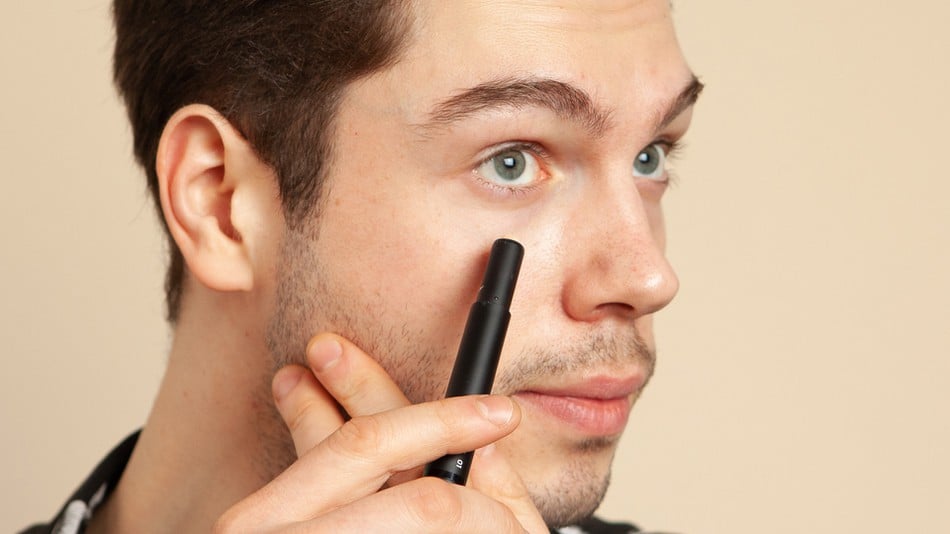 It's not a fancy pen, it's a concealer stick.
Image: Stryx

Nestled on my Instagram feed between a picture of a high school friend living their adult life and one of the Kardashians (they’re starting to blur together), was a sponsored post for “makeup for men” entitled War Paint. As I sat there watching the ad jump to life— a tattooed man covering his well-lit skin with a black beauty blender— I couldn’t get over the fact that it’s literally called “War Paint.”

Over time, I scrolled into more of these sponsored ads, like a weasel wandering into well-laid traps. Granted, I’m a gay guy who’s been wearing makeup since high school; some tinted moisturizer here, some blush there, but makeup nonetheless. So while I’m aware that these ads might not be enticing to me, per se, I wonder if they’d be enticing to someone who isn’t ready to step foot in a Sephora at any given moment.

If their ads are any indication, the brands I’m seeing on Instagram are attempting to change the narrative around men’s makeup and open up that corner of untapped market that men represent.

First, it’s important to note that queer men have been wearing makeup openly for a while. And thanks to male beauty gurus on YouTube, like James Charles and Jeffree Star, it’s commonplace to scroll by a boy with a “full beat” on Instagram. “The boys in beauty aren’t blurring gender—they’re expanding it,” writes Koa Beck in Marie Claire.

SEE ALSO: 7 of the best light masks for acne, according to reviews

While mainstream media is no stranger to putting makeup on men (David Beckham was recently on the cover of Love magazine wearing green eyeshadow), it’s still a tough sell to the average straight guy.  According to surveys, men are still quite hesitant to wear makeup.

The “Beauty Boys” are forcing brands to pay attention, making it clear that there’s an untapped market out there in the way of men’s beauty. Most recently, Chanel dropped a small line of makeup for men in late 2018. Forbes called it “revolutionary” and after GQ‘s style and grooming director tried it, he urged readers to “Wear more make-up.” Charlotte Tilbury and Fenty have both put out official videos demonstrating their products on men in an attempt to grab male customers and sell them on the fact that they, too, could benefit from some beauty hacks.

High-end brands aren’t a realistic option for men who are just beginning to dabble in makeup— $65 for a Chanel foundation is a leap, even if it is made for men. Charlotte Tilbury and Fenty, on the other hand, package their products in typical makeup fashion: shiny, colorful, and branded—characteristics that might make them weary candidates in a straight guy’s toiletry lineup. And at the end of the day, it’s all still makeup, a genre of grooming that doesn’t open its door that widely to men, particularly straight men…yet.

Our Concealer Swatches, what shade are you?

Equator, a “digital transformation agency” conducted a men’s makeup survey with UK adults (1000 men and 1000 women) aged 18 to 35. When asked if they had ever worn makeup or concealer, 19 percent of men admitted they had, 20 percent admitted they’d thought about it, and an overwhelming 61 percent said they haven’t worn any and haven’t thought about it either. And 56 percent of men said they wouldn’t be comfortable approaching a makeup counter— a number that rises as the age bracket reaches 35.

Perhaps the most interesting tidbit from the survey is this: 10 percent of men said they knew “a lot” of guys who wore some sort of makeup, compared with 5 percent of women. This might point to the fact that men who do wear makeup only discuss it with other men.

I realized, though, that that’s the point of these discreet, direct-to-consumer operations selling makeup for men. Nobody has to know. Unlike the new male-focused beauty lines from cosmetic powerhouses like Tom Ford and Chanel, these Instagram-savvy brands are making it a point to steer clear of traditional beauty jargon when advertising their “tools.”

Stryx, a company that sells just concealer and tinted moisturizer, markets them as just that: “tools.” The packaging goes a step further to ensure that anybody who lays their eyes on it won’t really know what it is. The concealer stick looks like a pen or a stylus, sleek and black. The tinted moisturizer looks like it could be a number of things, also sleek and black. Perhaps a portable charger? A fancy deodorant, maybe?

Stryx was founded by three men: Devir Kahan, Joe Lieberman, and Isaac Rami. In a phone interview with Mashable, they spoke about their approach to “cosmetics” and why their products have the potential to spearhead a new frontier in which men wearing makeup is the norm.

Instagram plays a huge part in their business plan, says Rami. “We’re able to directly speak to our consumers and change and develop things in the direction they wanna see it…it’s in our DNA.”

According to Forbes, Instagram influencer marketing could be worth more than $2 billion in 2019. That’s a lot of money to be spent on people hawking products on a photo sharing app.

Altr is another brand selling makeup for men on Instagram and it’s more straightforward. Alex Doyle, the company’s founder, puts more of an emphasis on marketing “makeup” straight up. “We tend not to shy away from the cosmetic angle, or promote discretion, like some other brands do,” Doyle told Mashable over email.

The UK-based brand touts a fuller range of products, similar to Stryx’s, like Skin Fix, a concealer-ish formula made for men using specific ingredients like China clay. The blemish fighting tool comes in a blue tin and upon first glance, it’s easy to mistake it for a lip balm.

While packaging seems to be of utmost important to these brands, it’s hard to tell if it’s really making a difference.

Barret Wertz, the style and grooming editor of AskMen claims that while shirking the stigma around these products may take time, it is doable. “Incorporating hyper-masculine copy or imagery is one very easy way of doing that, allowing men to buy something that inherently looks masculine, while still receiving the benefits of makeup,” he says.

Altr’s moisturizer, containing a “subtle whiskey extract,” is a winking example of a product made by men, for men. “I’ve always really enjoyed whiskey personally which was a big reason behind it,” Doyle admits. But it’s not just for marketing purposes. “The whiskey infusion helps our key soothing ingredients such as Chamomile and Aloe Vera 200x properly absorb into the skin,” Doyle claims.

While that may sound like marketing hoo-ha, it’s actually not. Mintel, a leading market intelligence agency, conducted a survey in 2017 that found that men do pay attention to ingredients. “Natural” is the “top attribute” that men look for on packaging of personal care products. Whiskey, it seems, might actually persuade customers to follow through with a purchase.

Stryx’s nod to hard liquor comes in a different form: the shade selection. While their range is weak (they’re planning to expand it soon), it’s the way users choose their color that stands out. To select a shade, users can pick between three different tumblers filled with ice. “We see our whiskey glasses as interesting and different, but many of our customers don’t even realize that it’s different or unique, per se, as it’s their first time thinking about cosmetics and shades,” says Kahan.

With men’s cosmetics is potentially a massive emerging market, it’s hard to tell whether these particular brands will thrive. Wertz doesn’t think makeup will ever be a staple in the average straight man’s routine. “I don’t think you’re ever gonna see a guy with a fully beat face who’s going to work at a bank,” he laughs, “that’s probably not gonna happen.”

Yet, with only a couple products to their names, these companies have managed to get their feet in a door that didn’t exist, say, five years ago.“While California is our biggest market, demand is actually surprisingly widespread across the country, with a lot of orders coming from southern states like Texas,” says Doyle about Altr’s reach.

“We have not found that a specific age buys our products more than others, and our customers range in age from 18 all the way to 50,” notes Kahan. “We have delivered Stryx orders to customers everywhere from Apple headquarters and the tech sector, to actors and directors, to “strait-laced” professionals on Wall Street or in law.”

Somewhere between Bear Grylls and James Charles is the everyman. The one who just wants to wake up, go to work, and fit in with society. If having a clear face comes naturally to them, great. But what if it doesn’t? What if they suffer from acne scars? What if they’re just naturally a little ruddy?

Those questions might not be easily answered, but some should find solace in the fact that the solution could be just a click away.

Editor’s note: Mashable and AskMen are both owned by Ziff Media Group.

Why Florida is still dominating the space launch game