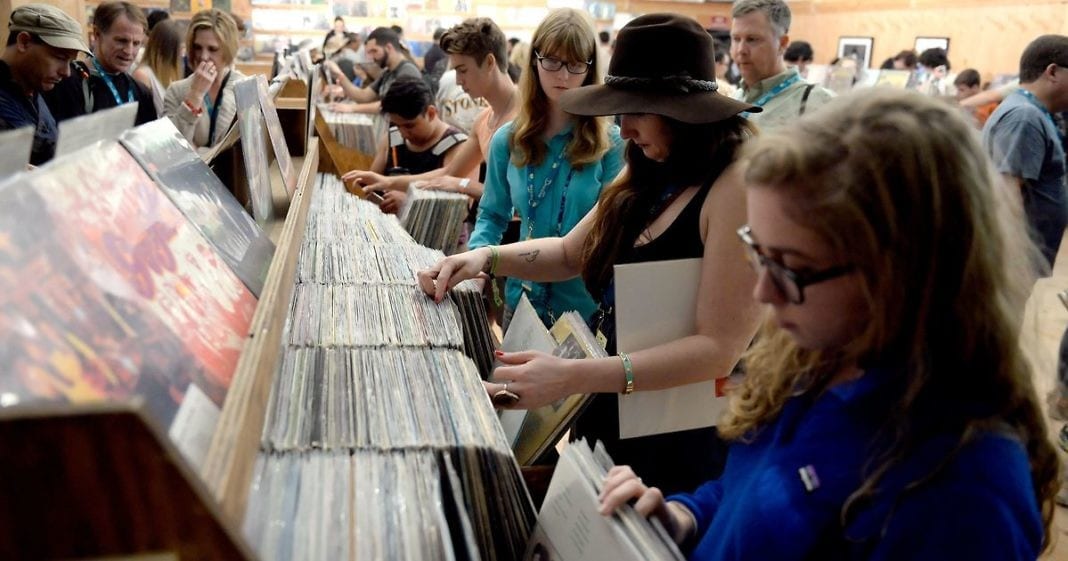 For the first time, money spent on vinyl records in the UK overtook that spent on digital downloads.

UK record sales figures for vinyl hit 2.4m last week compared with the 2.1m made from digital downloads, according to the Entertainment Retailers Association (ERA), which which used Official Charts data.

Online purchases are still the more popular products with 295,000 albums sold in the same period as opposed to 120,000 vinyls.

That’s because vinyl albums are much more expensive than downloads.

Kate Bush’s triple-disc live album Before The Dawn, which is sold at 52 in the shops and topped the charts last week, is available for download at just 12.

In the past 12 months, interest in buying a vinyl has grown dramatically. The same week last year the sale in physical albums were at just 1.2m while digital purchases were 4.4m.

The surge is partly attributed to a number of retailers like Sainsbury’s and Tesco which decided to stock vinyl, making them more accessible, ERA said.

That also explains why big albums such as Amy Winehouse’s Back to Black and Guardians of the Galaxy Awesome Mix Vol. 1 stocked in a variety of supermarkets are performing strongly in the sales chart.

“This is yet further evidence of the ability of music fans to surprise us all,” said ERA chief Kim Bayley.”It’s not so long ago that the digital download was meant to be the future. Few would have predicted that an album format, first invented in 1948 and based on stamping a groove into a piece of plastic, would now be outselling it in 2016.”

In May, the British Phonographic Industry, which represents recording artists and the UK music industry, launched an attack on YouTube and other video streaming services, saying artists are actually making more from vinyl sales than video streams.

Their findings, which were published in the Music Market 2016 yearbook, are based on data from the Official Charts company and various other organisations including IFPIand Kantar Worldpanel.

BONUS: This levitating turntable can play records in the air

Electric, the startup that automates IT, raises $25 million from GGV

XR is a new way to consider the reality continuum