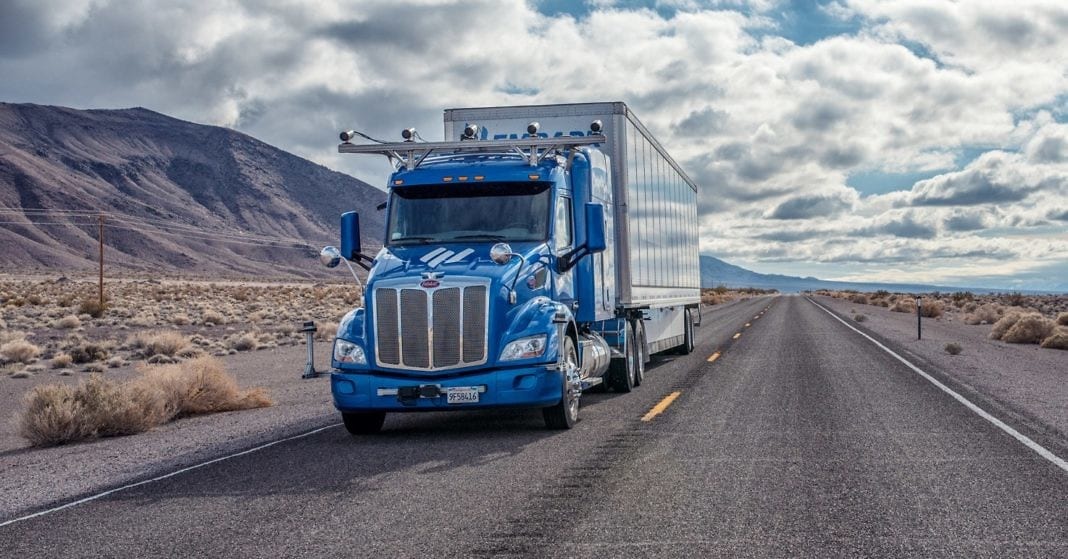 If you live in Southern California and you’ve ordered one of those fancy new smart refrigerators in the past few weeks, it may have hitched a ride to you on a robotruck.

Since early October, autonomous trucks built and operated by the startup Embark have been hauling Frigidaire refrigerators 650 miles along the I-10 freeway, from a warehouse in El Paso, Texas, to a distribution center in Palm Springs, California. A human driver rides in the cab to monitor the computer chauffeur for now, but the ultimate goal of this (auto) pilot program is to dump the fleshbag and let the trucks rumble solo down the highway.

“This is the first time someone has demonstrated this end-to-end," Embark CEO Alex Rodrigues says. "It showcases the way that we see self-driving playing into the logistics industry.”

Embark is one of many companies that believe semis, not personal cars, are the smartest use of autonomous technology, or at least the best way to get it onto the road ASAP. Major players like Volvo and Daimler are working on their own robo-truckers. So is Elon Musk’s Tesla. Waymo (the company formerly known as Google’s self-driving car effort) is thinking about putting its tech to use in big rigs. Uber's autonomous truck has hauled cases of beer across Colorado. And plenty of startups have popped up, looking to claim some territory in this newly discovered land of opportunity.

They’ve got some good arguments. First off, making a robot that can drive itself on the highway, where trucks spend nearly all their time, is relatively easy. You don’t have to account for pedestrians, cyclists, traffic lights, or other variables. The big rig just has to stay in its lane and keep a safe distance from fellow travelers.

Better yet, the need for autonomous trucks is very real: Trucks carry 70 percent of goods shipped around the US, but truckers are scarce. According to the American Trucking Associations, the industry is now short 50,000 drivers. As current drivers retire or quit, that number could hit 175,000 by 2024. Cut down the need for the human, and that shortage stops being a problem. And a self-driving truck isn't subject to rules that ban humans from spending more than 11 hours at a time behind the wheel.

Indeed, make a truck that doesn’t tire (or text), the thinking goes, and you save lives: In the US, more than 4,000 people die in crashes involving trucks every year, crashes that nearly always result from human error. That’s why the American Trucking Associations has embraced the new tech, recently issuing its first autonomous vehicle policy, calling for uniform federal laws that could help developers and researchers make automated and connected vehicles safer than humans. (The Teamsters are less enthused, and have pushed against the inclusion of commercial vehicles in coming federal legislation.)

For now, the Embark milk runs are designed to test logistics as well as the safety of the technology. On each trip, a human driver working for Ryder (a major trucking company and Embark’s partner on this venture) heads over to the Frigidaire lot in El Paso, picks up a load of refrigerators, hauls them to the rest stop right off the highway, and unhitches the trailer. Then, a driver working for Embark hooks that trailer up to the robotruck, cruises onto the interstate, pops it into autonomous mode, and lets it do its thing. The truck mostly sticks to the right lane and always follows the speed limit. Once in Palm Springs, the human pulls off the highway, unhitches the trailer, and passes the load to another Ryder driver, who takes it the last few miles to Frigidaire’s SoCal distribution center.

Today, the human doing the highway stretch is there to keep an eye on things. In a few years, Embark hopes to ditch the carbon-based nanny. At that point, the humans doing the work at either end of the trip would be like the bar pilots who guide massive container ships into and out of port. And it should be a lot easier to find drivers if they don't have to spend days or weeks at a time away from home, instead focusing on local deliveries.

The company needs to do much more testing, Rodrigues says, making sure the truck can handle things like merges, construction zones, and lane changes. But bureaucracy is as much a part of the equation as technology: Sending a truck—even one with a human inside—across multiple state lines required six months of agency-wrangling and paperwork-filing.

But if the technology and the regulators can come together, when you pull a cold beer from your smart fridge, you may start to lose count of how many robots you have to thank.

A decade ago, the idea of self-driving cars on American city streets was almost unthinkable. But a series of contests spurred the development of software and hardware that have brought us to dawn of the next automotive revolution.

With these numbers, its no surprise SoftBank is investing in Latin America

GE, Siemens Vie to Reinvent Manufacturing by Harnessing the Cloud