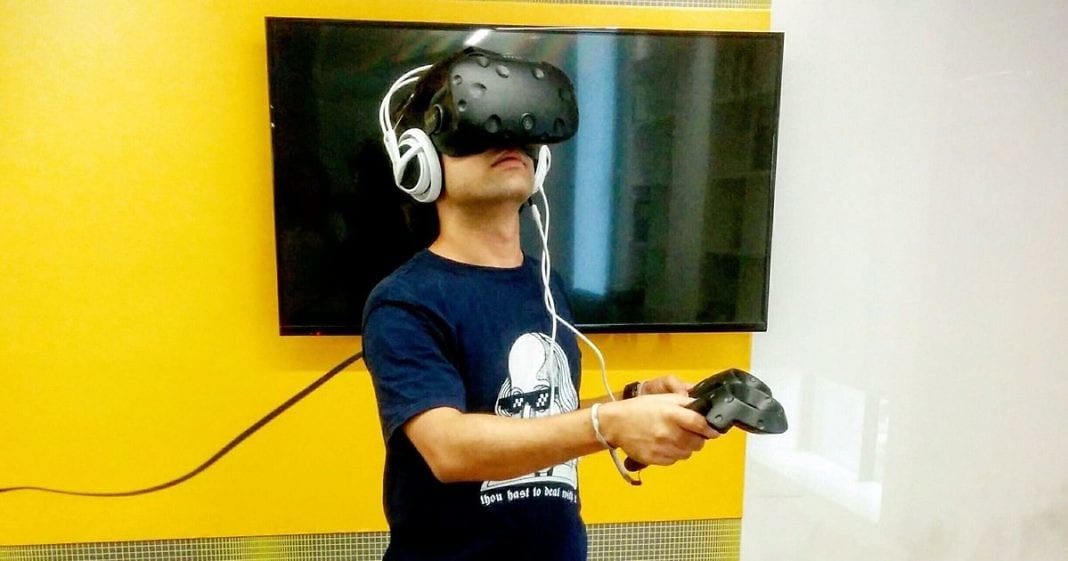 An Indian startup is pushing through limits of virtual reality technologies, creating business solutions that are mostly unheard of in the industry. But is India ready for such solutions yet?

After working for a decade at Space Matrix Design Consultants, one and a half year serving as its Director of Global Projects, Gautam Tewari knew he just could not spend more of his time at the firm. The core problem with design consultancies at the time, he says, was visualisation. “Its largely static and passive.” Could we do better?

SEE ALSO: India’s most elite universities have banned startups from recruiting on campus

In 2014, Gautam left Space Matrix Design Consultants with his wife, Tithi Tewari, then Senior Director at the same firm. They spent the next few months experimenting with a couple of things and speaking with other firms. Until they met a team of gamers.

In particular, they met with Chandan Singh, who brought with him years of experience developing games using engines such as Unreal, Unity3D, CryEngine, Source, and Infernal. As they began talking, they wondered if they could use these engines, add architectural designs that clients want, and offer an immersive experience. “This is where the company started to shape up,” Gautam says.

Heres one example of what they offer. Imagine you want an apartment. You go to a constructor, tell him or her about your preference and how you want different rooms to look. The constructor along with designers make sketches and load up the CAD file on a computer. “But how does this setup look with this shade of lighting and with different furnitures?,” You ask. Nobody knows for sure.

SmartVizX is trying to fix this problem. It offers content creation solutions, and using game engines make a virtual world much like the places seen in the Sims or GTA only this is about the apartment or an office that you want.

You wear a virtual reality headset, like HTC Vive, and roam around the digital world. Your movements in real life work in tandem with how your virtual counterpart explores his or her world. You are able to see how a room would look like, feel the lighting, and sit on the carpet. Dont like the decor? The team can swap it in real-time. “We took VR beyond the gaming fraternity,” Gautam says.

This visualisation can take up to 13 days for SmartVizX team to develop, which is impressive many analysts say. Depending on the complexity and how many virtual rooms you want built, the package could cost you anything north of $2000.

Their team today consists of several big names from VR industry including Shailesh Kumar, who previously worked at Samsung as Senior Chief Engineer and led their team for Gear VR. This week, SmartVizX said Vinay Narayan has joined the companys board. Narayan is Executive Director of Virtual Reality Product Management at HTC Vive.

But things arent going as smooth as one would like. From scarcity of talented programmers and gamers, to the reluctance of many big firms in adapting VR technologies, to the need of virtual reality gears to demo things, SmartVizX faces a number of challenges. Gautam recalls several exchanges with clients where they acknowledged the value VR solutions can bring, but they dont see a compelling reason to upgrade their tech yet. “I know what we have right now is broken, but people are still buying my products,” Gautam shares one of such instances. “If it isnt broken, why fix it”

The market for real estate business is considerably big in India, with several estimates suggesting that it could grow north of $650 billion by 2025, Jaimin Desai, Head, Design and Sustainability, Mahindra Lifespaces told Mashable India. He adds, “the governments thrust on housing and infrastructure development via initiatives such as Housing for All and the Smart Cities Mission also bodes extremely well for the growth potential of the sector.”

“VR-based services have the potential to significantly enrich the customer journey in real estate via immersive, transformative technology applications. Going forward, for example, prospective home owners might be able to walk through and experience their future apartments at different times of the day, and check views, angles and interior design elements. It is not impossible to envision a future where rich, 360 degree representations of real world properties through VR are a widespread reality, serving to define the customers journey in the home buying process,” he adds.

Several companies, including e-commerce site Lenskart are exploring VR technologies with their customers. It asks users to upload their photograph and places a digital replica of a pair of glasses on it to give them some idea about how these glasses would look on their face. Housing, one of India’s largest real estate portal offers customers 360-degree view of an apartment.

Ankur Dhawan, Chief Business Officer of Resale Transactions at real estate advisor company PropTiger adds that there are many companies in India, including the one he is working at, that is exploring VR and other technologies to improve a customers experience. But he warns that most companies currently ask for a premium for their services, and it’s one of the major roadblocks that is pushing clients away.

But despite all these challenges, SmartVizX is slowly gaining ground. It has received orders worth over $150,000 this year alone, Gautam tells us. Some of its clients include BloombergQuint, IndiGo, MagicBricks, and BMR Advisors. The company has enough cash to survive for another 18 months, he adds. SmartVizX raised $500,000 from Indian Angel Network, Stanford Angels and Entrepreneurs India (SA&E) earlier this year.

Moving forward, Gautam says his startup will expand into other areas including e-learning, and advertising. He also has plans to bring e-commerce component into these content creation. This would allow his startup offer all sorts of furnitures from our partner companies, for instance. But he will not hurry into these areas just yet. He says SmartVizX has attracted attention from outside India as well, and with Narayan’s help they will look into improving their visibility in the U.S. market, where the demand for virtual reality solutions is much more.

“We do not want to diversify into an area we cant win yet,” he said.

Pinterest puts an IPO on its pinboard, hiring Goldman Sachs and JPMorgan to lead...

Inside Expa Labs, Uber co-founder’s take on the startup accelerator