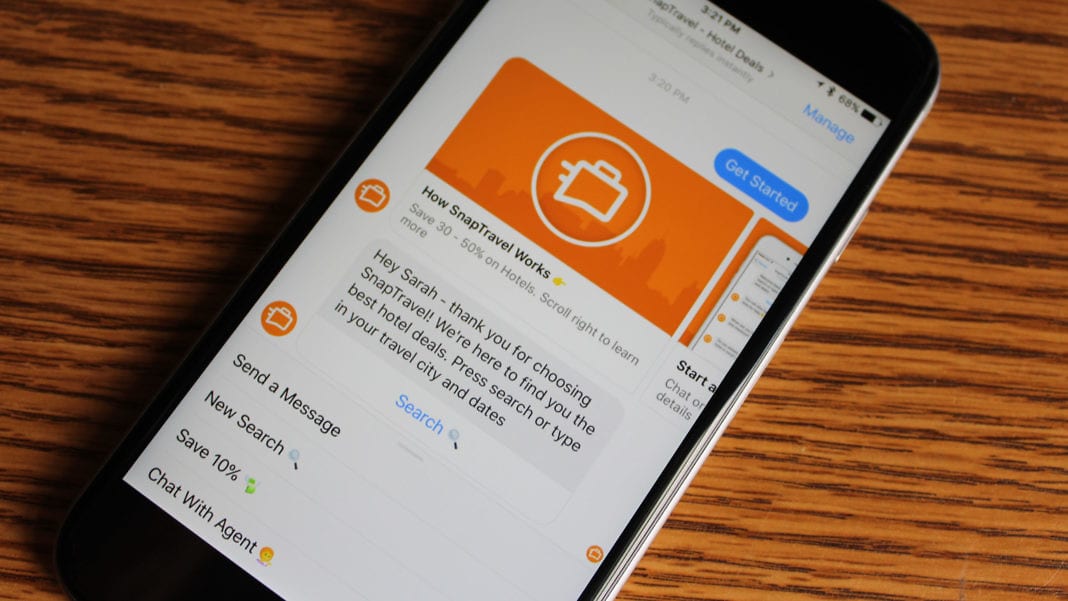 Chatbots automated bots that let you interact with a service or brand via messaging apps or SMS havent yet become breakout hits, as a group. But that hasnt stopped investors from pouring in $8 million into a hotel booking startup called SnapTravel, which lets users find and book rooms via SMS texts and Facebook Messenger.

The $8 million Series A round was led by iNovia Capital, a backer of Luxury Retreats which just exited to Airbnb for around $200 million. The round also included participation from seed round investorsLightbank, Bee Partners, and Hedgewood, along withstrategic investor and Expedia board memberPeter Kern, among others.

iNovias Chris Arsenault is joining SnapTravels board with the close of the round.

The startup itself was founded in spring 2016 by tech entrepreneursHussein Fazal, whose prior company AdParlor grew to $100+ million in revenue, then sold to AdKnowledge back in 2011; and Henry Shi, who previously built uMentioned and worked at Google, where he helped launch YouTube Music Insights.

Unlike a number of chatbots on the market today, SnapTravel isnt a fully automated solution arguably, to its advantage. The bot part of the service aids with onboarding and can answer users simpler questions, but when things get tricky, human agents are able to step in. For example, if you booked a non-refundable hotel but your flight gets cancelled due to weather, an agent would respond to your questions and try to help, rather than leaving you to deal with an unsympathetic bot.

You can also ask the agents for help with questions bots cant handle like if the hotel is pet-friendly, or if you can get adjoining rooms, among other things.

Customers want a travel agent experience, but they didnt want to call; they didnt want to walk into a store, explains Shi. They just wanted to email us or message us, he says, of when the company began testing ideas. That led them to realize that delivering the hotel booking experience could work over chat.

SnapTravels human agents effectively operate as modern-day travel agents. Theyll call hotels for you, as needed, and even phone to confirm your check-in and attempt to negotiate a free upgrade on your behalf.

Though still an early stage startup, SnapTravel has made a bit of a name for itself due to its deals and its app-less business model.

The company filters through thousands of hotels from sources, then leverages machine learning algorithms to narrow those down to the top options, based on factors like price, location, quality and overall value.

As customers continue to use SnapTravel to make their bookings, the service learns more about individual preferences like if you want free Wi-Fi or free breakfast, for instance and then takes those into consideration for its future recommendations.

SnapTravel doesnt necessarily have any deals you cant find elsewhere, but it can feel like it, at times. As its own website explains, it has access to the same unsold hotel inventory that others do. The services hotel inventory comes both directly from hotels themselves, as well as via partners like Expedia, Booking.com, Amadeus, Hotels.com, and Sabre (pending).

But while agreements between hotels and some hotel booking services disallow them from posting their super-low rates publicly, SnapTravel is able to work around that restriction because its only displaying prices through private, 1-on-1 chats not publicly on the web.

But SnapTravel is not always the place for the lowest priced deal or the most options, some reviewers have found.

However, lower cost is not SnapTravels only draw, Shi points out.

Were 100 percent free to the customerthe way we make money is the commission on the hotels, he says.But were building a relationship with the customer because were chatting with them over a channel thats very intimate, like SMS or Messenger. For us, its a conversation and that conversation doesnt stop when you make a purchase. It goes from search to purchase to upgrade to even post-checkout, Shi explains.

At Facebooks f8 developer conference earlier this year, SnapTravel announced that it had already achieved over $1 million in revenue on Facebook Messenger. It has since surpassed that, and launched its service on SMS and chat app Viber.

It eventually wants to reach users worldwide through other platforms, as well, like WeChat and Line.

The company believes that chatbots hold potential especially in the case of Facebook Messenger, in terms of reach. (Messenger topped 1.2 billion monthly users worldwide in April, for example.) SnapTravel doesnt need to get anyone to download its app in order to work.

The team appreciates that SnapTravel can advertise to users in-app through things like Sponsored Messages, andretarget them directly in their messaging inbox when they fail to complete a transaction. In that latter case, SnapTravel says it has seen a 30 percent jump in conversions when retargeting in this way on Messenger.

Being able to re-engage customers is critical for any commerce company. Typically, with an [online travel agency] when you come to the website and bounce, they have to follow you around the internet using display ads, notes Shi. Thats a very noisy and ineffective channel, he adds.

For us, being able to use Sponsored Messages on Facebook has been super effective. Were seeing double-digit lift from these re-engagement efforts, Shi says.

With the additional funding, SnapTravel says it will invest further in itsNatural Language Processing (NLP) capabilities in order to reduce the reliance on human agents as its scales. In this envisioned future, that would mean an automated bot would be able to understand a conversational input from a user, like Im going to New York next week Wednesday for a night, and need a room at the usual spot, for example.

Without needing a human to translate that into a booking request, SnapTravel would then send the customer to the booking form for the right hotel and take their payment through Messenger.

Currently, SnapTravel is a dozen or so product engineers based in Toronto, in addition to an operations company stateside. With the new funds, the startup plans to expand to a team of 20 to 25.

Technology, happiness on demand and the absurd human condition