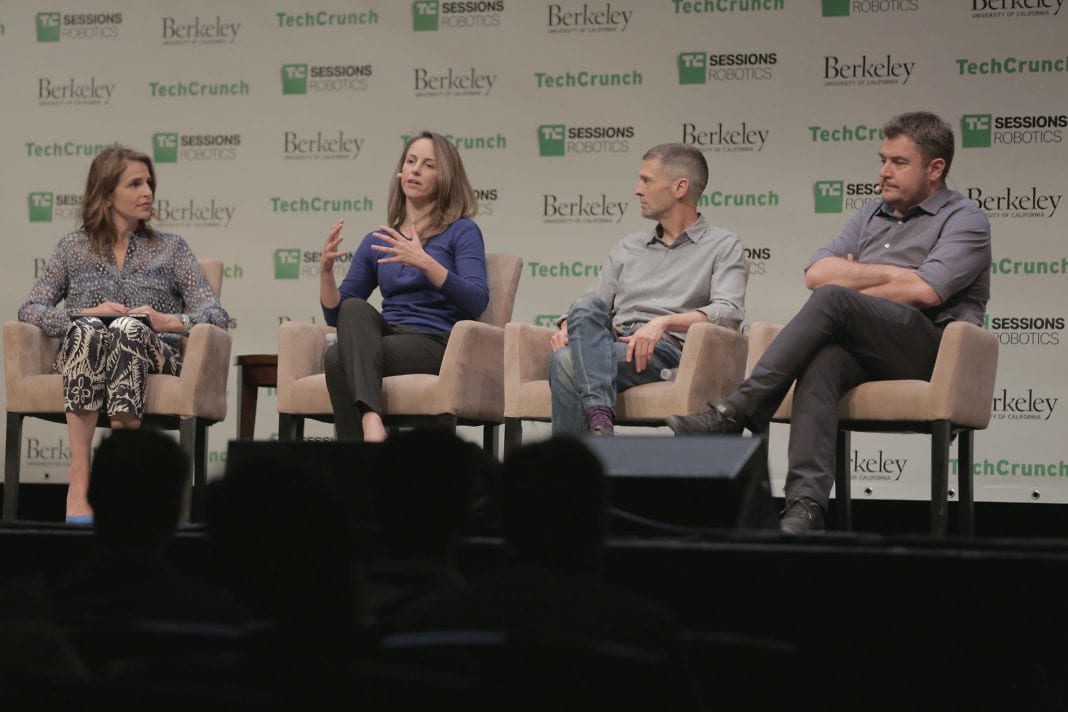 Every once in a while, a college student or recent graduate dares to launch a robotics startup and . . . everything goes as well as could be expected. Such is the case, for example, with Alex Rodrigues and Brandon Moak, two former University of Waterloo students who worked on self-driving technologies together in college and formed their now venture-backed, self-driving truck company, Embark, instead of graduating. (Originally called Varden Labs, the startup’s trip through Y Combinator undoubtedly helped.)

Still, to capture the sustained interest of robotics investors, it helps to either have experience in a particular industry or to pull in someone, quickly, who does. That much was established yesterday at UC Berkeley, when three veteran investors — Renata Quintini of Lux Capital, Rob Coneybeer of Shasta Ventures, and Chris Evdemon of Sinovation Ventures — took the stage of a packed Zellerbach Hall to talk about where they’ve invested previously, and where they are shopping now.

Though the three expressed interest in a wide range of technologies and plenty of optimism about what’s to come, each lingered a bit on one point in particular, which was the difficulty robotics founders face who are completely unfamiliar with the particular industry they may hope to reshape with their innovation.

You can catch the entire interview below, but we  thought college students — and their professors and mentors — might want to pay particularly close attention to this concern if they’re thinking about hitting up investors in the not-too-distant future.

Quintini on how comfortable she and her colleagues at Lux are when it comes to backing recent college graduates:

What we care the most about what is your unique insight and what do you know about tackling a certain market or problem that’s not obvious or easy to replicate. In some cases, it’s very fair for someone right out of university who finds a technological breakthrough and . . . that breakthrough alone is understandable and comprehensible to the market and it’s a very backable company, and we’ve done that in the past.

But in some cases, and you’ve heard today, [CEO] Patrick [Sobalvarro] from Veo Robotics speak — and [Veo is] actually giving robotic arms perception sensors to allow people and robots to work together — all his insights came because he came from industry. He was at Rethink Robotics; he’s been in the robotics industry, selling to people who use robots as part of the manufacturing process. And so he actually understands the importance of safety and the selling of those systems to customers. Because he knew that, it made a big difference in how he approaches his go-to-market strategy and how he approaches building a product. And somebody who’s just thinking about, ‘Oh, let me figure out the technology and how to understand when a human is close or not’ and who didn’t think about the other angle wouldn’t be so successful or differentiated in our opinion.

Coneybeer sounded a similar tone. In fact, when asked if he felt there were other overlooked opportunities like that identified by Veo — which is refitting existing robotic arms, rather than trying to remake them from scratch — Coneybeer said the most attractive thing of all to him are startups in search of a problem that actually exists:

What we’re very cognizant of is people who love robots and are trying to invent a market or invent a need and kind of force fit it, as opposed to people who understand a need and are using robotics as a tool to truly solve that need. That’s a really key differentiator.

We directed an entirely different question to Evdemon, about how Sinovation thinks about domestic versus industrial robots and whether it expects to commit more capital to one or the other. But Evdemon first took the time to note that the problem of founders who don’t know their industries is a very big one, and deserved more discussion:

Chiming in to what Renata and Rob were saying, you understated [the issue]. The majority of the teams that we are looking on both the consumer and industrial robot [worlds] at the moment are more of a technology trying to find a fit in the market, and that’s obviously a very big problem from a venture point of view.

We also see a lot of teams that are fresh out of school, usually a supervising professor with a couple of his or her PhD students having come across some kind of technological breakthrough in university and trying to commercialize that. But robotics are all about what sectors they are being applied to. An ag tech team that knows nothing about agriculture, or a security robot that has a team that’s come up with a great computer vision breakthrough around security issues but that has no idea how the security industry in the U.S. or other parts of the world is structured, is obviously not a good starting point — at least not from a business-minded point of view.

And all of these companies run across tremendous difficulty when it comes to sales. Complementary of teams and market fit [both, are] important for [students] who are thinking about such a move straight out of school.

With Uber’s Travis Kalanick out, will Silicon Valley clean up its bro culture?