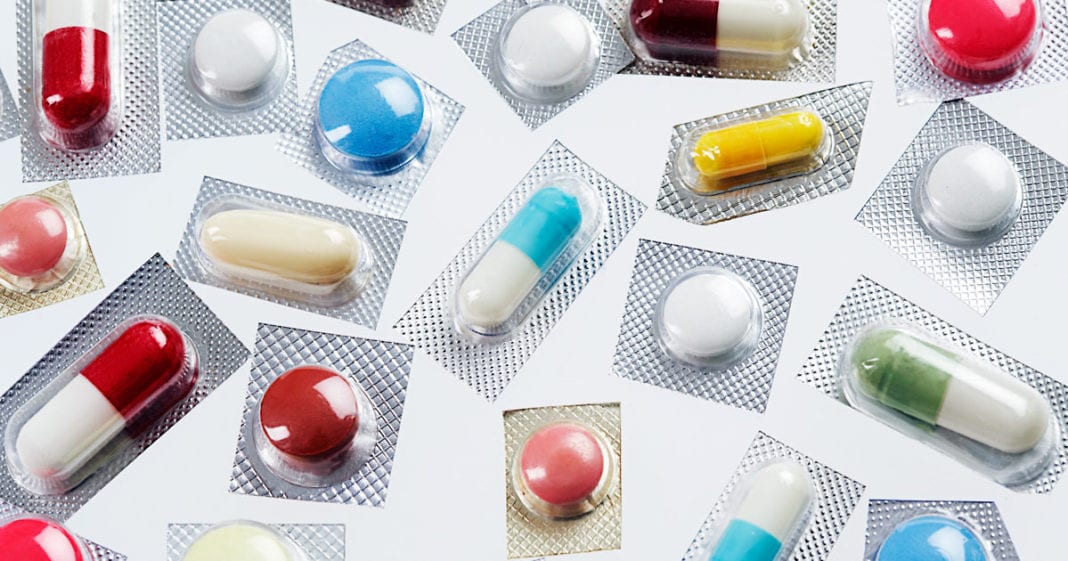 New York City subway passengers put up with a lot: the manspreading, the random schedule changes, the 5.7 million other daily riders. But some members of this mostly unflappable crush of commuters wont stand for a new ad running this month inside trains. In bright pastels, the banner reads: Someone sneezed? Its OK, well be right over with some very, very strong antibiotics. It advertises a prescription home delivery service called Capsule, which launched in the five boroughs last year. It also advertises one of the leading causes of antibacterial resistance—the unnecessary overprescription of antibiotics.

Now, sneezing can spread disease, by releasing microbes suspended in tiny droplets of mucus and saliva into the air. But the overwhelming majority of airborne illnesses—the flu, the common cold, measles, chickenpox, tuberculosis—are caused by viruses, not bacteria. Antibiotics wont help you, no matter how strong they are or how much you beg your doctor to give them to you. But taking easy-access antibiotics needlessly (and frequently) is exactly the kind of behavior that contributes to antibiotic resistance.

This plan won’t help your sneeze, but it will help you get closer to an infection untreatable by antibiotics. Thanks Capsule! @capsulecares pic.twitter.com/E3sluPc0Tp

Subway passengers took to Twitter this month to call out Capsule for tone-deafness to what is rapidly becoming a growing global health crisis. Antibiotic-resistant infections in US children surged by 700 percent between 2007 and 2015, resulting in longer hospital stays and greater risk of death. Earlier this year a woman in Nevada died from an infection impervious to every available antibiotic in the US. And on Monday, the World Health Organization announced a list of the 12 most dangerous superbugs, urging the pharmaceutical industry to find new treatments for them, and fast.

Capsule, which is funded in large part by Thrive Capital, the venture firm managed by Jared Kushners younger brother Joshua, declined to officially comment for this story. The company is trying to remake the pharmacy experience into something more intimate, more like a mom taking care of her kid: After receiving a prescription from an outside doctor, its app gives you information about how to take the drug, what it costs, and offers 24/7 access to a pharmacist for questions. When youre ready to purchase, you plug in your address and a courier delivers the prescription to your door. And like a mom, the app also checks up on you to make sure youre actually taking your meds.

That could actually be a good thing; not following through on a course of antibiotics creates prime resistance-developing conditions. The problem, though, is that unless your mom has an MD and a CLIA-certified testing laboratory, she probably cant tell you whether that subway sneeze is worth dosing up over in the first place.

But Chris Mason can. It is very medically irresponsible to just grab antibiotics every time you see someone sneeze, says Mason, a professor at Cornell Universitys medical school. In 2015, he and a team of researchers built a microbial map of New York Citys tube system—swabbing their way through 24 subway lines worth of seats, doors, poles, handrails, turnstiles, and card kiosks. Then they sequenced everything they found: more than 600 known bacterial, viral, fungal, and animal species. The verdict: The overwhelming majority of every fragment of DNA in the subway is harmless, says Mason. Despite riders fears of catching cold or flu from fellow straphangers, viruses made up less than a third of a percent of the samples.

Live, antibiotic-resistant bacteria on the other hand, showed up in 27 percent of samples.

Mason has since taken his project global, building an international consortium of scientists dedicated to exploring urban microbiomes. Theyre looking for trends—regional, seasonal, behavioral—to explain and predict how species distribute themselves. New York actually ranks pretty low on the resistance scale. But you have to wonder if business models like Capsules, which lowers the barrier to antibiotic access, might change that. Cities in countries where buying over-the-counter antibiotics without a prescription is legal (or not enforced) show higher rates of resistance. And in those places, resistance seems to appear more frequently near pharmacies that distribute them. Mason’s group is also looking at proximity to waterways, food centers, outpatient clinics, and transit sites.

The results are still preliminary, and wont be formally released until later this year. But they offer a glimpse into how local and national policies and practice are already shaping bacterial resistance around the planet.

That, unlike a subway sneeze, is actually cause for concern.

Following a Tuna from Fiji to Brooklyn—on the Blockchain