By buying certain menstrual products, consumers can trigger a donation of supplies to poorer countries, where women are often forced to rely on old rags 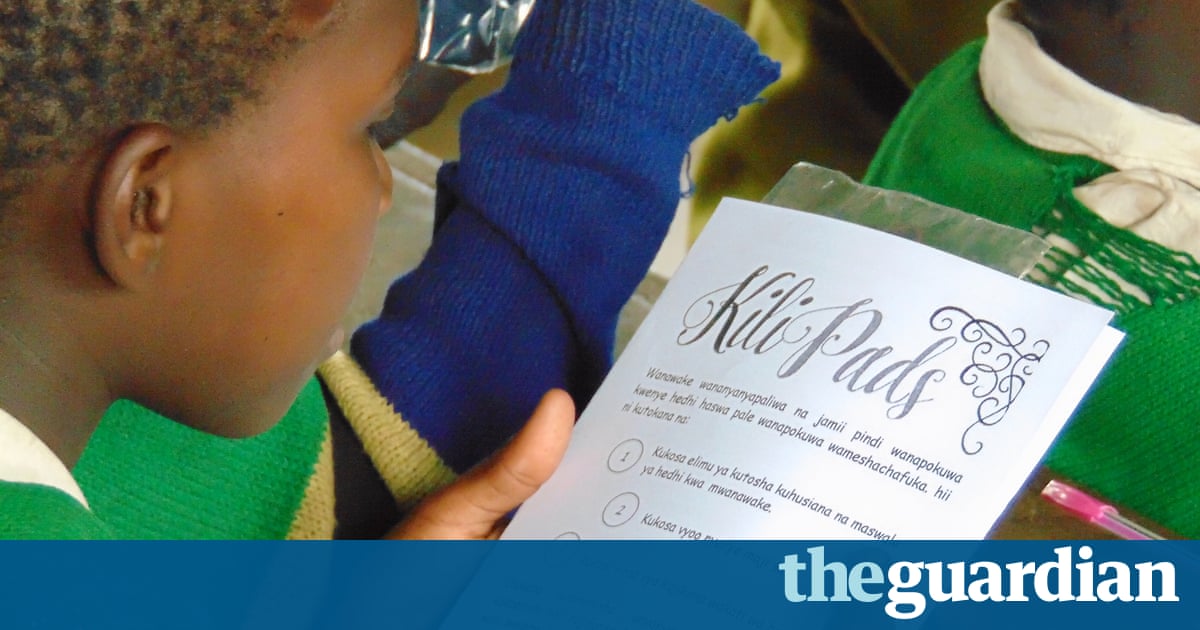 Menstruation is getting its moment: there have been tampon selfies, tampon tax campaigns around the world, and even a day dedicated to menstrual hygiene. Now, a growing crop of companies is promising consumers they can help bring sanitary products to women who cannot afford them.

Buy a pack of pads and a supply will be donated to a woman in a developing country. Its a bit like Toms shoes, the original one-for-one social enterprise, but for tampons. In the US, such companies have grown rapidly in popularity. Among them is L., founded by Talia Frenkel, a photojournalist who worked for the Red Cross and UN. It now sells its products in stores across the US, and distributes sanitary products and condoms through a network of more than 3,000 female entrepreneurs in poorer countries, including Uganda, Sierra Leone, Liberia and India. The company says it will donate more than 28 million health products this year.

Another company, Lunapads, runs a One4Her scheme, where every sanitary towel sold in the US pays for a pad for a girl in east Africa. So far, it says 17,000 women have benefited from the scheme, where pads are produced through the social business Afripads. Other companies running similar projects include Be Girl, which sells knickers – with pouches to hold liners, and Thinx, maker of special absorbent underwear.

The trend may be about to catch on in the UK. Companies such as L. are already eyeing up Europe, and London-based startup Freda is promising women in the UK that for every subscription for sanitary products it sells, it will pay for a supply to be produced by KiliPads, a women-run social enterprise in Tanzania. The pads, which are reusable, will then be handed out in local schools.

The project is still in its initial stages there are only five women working for Kilipads, and neither Kilipads nor Freda are profitable yet. By ordering products from social enterprises such as KiliPads, Freda aims to avoid flooding the local market with western products a criticism made of Toms shoes. Were trying to make it all more local local materials, employing local women, supplying local girls, says Freda founder Affi Parvizi-Wayne.

Freda is aimed at socially conscious young people, who are willing to pay extra for ethical products. They are very much anti big brands. They want to know where their products have come from, and if they can do good, they will do, she says. A subscription costs around 6.99 a month.

The issue of periods and the impact they have on girls health and education has been neglected in many poorer countries. Research has found girls often arent given enough information about puberty: a study by menstrual health charity Femme International found that 75% of girls in Nairobis Mathare Valley slum had no idea what their period was before it arrived. Once girls do start menstruating, many have no access to reliable sanitary products.

Researchers in rural Kenya found that girls rely mostly on old rags, and in some cases, cotton wool, grass, socks, plastic and paper. In India, only 12% of women and girls use sanitary products. Many girls go to school dreading their period will stain their clothes, or that other students will smell an odour. In sub-Saharan Africa, one in 10 girls miss school during their period, according to a Unesco report.

Classroom practices, such as an expectation in some countries that students stand up to answer questions, make matters worse, says Marni Sommer, associate professor of sociomedical sciences at Columbia University.

Walking to the front of the classroom is already scary but it becomes a lot more scary if youre worried about everybody staring at the back of your uniform. Menstruation is one reason why girls drop out of school altogether.

Handing out reusable pads, and providing education, does help, says Paul Montgomery, professor of social intervention at the University of Birmingham. He led a research project that tracked school absence rates among 1,000 girls at eight schools in Uganda. In the two schools where sanitary pads or puberty education were not provided, levels of absenteeism among girls were 17% higher, on average, compared with schools where girls received pads, education, or both.

But startups offering to distribute products must be transparent about the impact theyre having, and commit to monitoring their impact, says Frenkel at L. in the US: They must vet their partners to ensure that what they give ends up in the hands of the people who need it most, and isnt languishing in a warehouse somewhere, or in a clinic.Making sanitary products available will only solve part of the problem, though. Education, awareness among teachers and toilet facilities in schools are also crucial, says Sommer. In about 50% of the least developed countries, theres no safe place for girls to change their pad while at school. Either they dont have toilets, or they dont have toilets that are clean or safe, she adds. This might mean theres no door, or no clean water nearby.

For girls using washable products, another concern is having access to soap, water or a private place to clean and dry pads. That was more of an issue than people might think, says Montgomery. If you think in terms of infection control, what you want is to dry them outside in the sunlight, and those are conditions which are not always very easily possible. While researching the issue in Uganda, Montgomerys team found examples of girls in boarding schools drying their pads under their bunk beds because of the stigma attached to menstruation. In other studies, women have reported attempting to dry cloths under other layers of clothing so that they remain hidden.

While reusable products might work for some, Montgomery questions projects that sell a disposable pad to women in the US or UK, but donate a washable pad to women elsewhere. We have a very colonial view sometimes. These reusable products are supposed to be all very well in low and middle income countries, but theyre not the prevalent thing here, he said. Why arent Always and those kinds of products and to be frank, Im not sure theyre the best good enough for them? Its very patriarchal to say they can have some arguably inferior product.

Others arguing in favour of reusable products say that these are preferred by some women, and theyre more environmentally friendly. Disposing of throw-away pads is a challenge in some areas, and its further complicated by taboos surrounding menstruation, such as the belief held by some communities that menstrual blood cannot be burned. These issues are still neglected, says Sommer.

While periods have become popular topics, waste management is not. Saying to people lets talk about sewage and waste disposal its just not sexy. Its hard to get people to say Im going to put my money into coming up with disposable waste management systems.

Whether its better to donate money directly or to a use a buy one, give one product depends on the project in question, but more attention and awareness of the issue is helpful, said Sommer. Donations wont transform girls lives overnight though. That comes when social norms around talking about this issue, when the education system provides adequate safe toilets, when girls are across the board given the information and support they need as they come of age and as their bodies change as they try to manage their periods in school. That large scale buy-in of the public sector, and of the social norms of the community and the society are what will make the biggest changes ultimately.

Meet the woman creating the Facebook Live of sex ed

Robinhood aims at IPO as the fintech startup seeks CFO