One of the best-selling toys of the 1980s has been resurrected by Wicked Cool Toys, which earlier this year also launched a revamped Cabbage Patch Kid doll 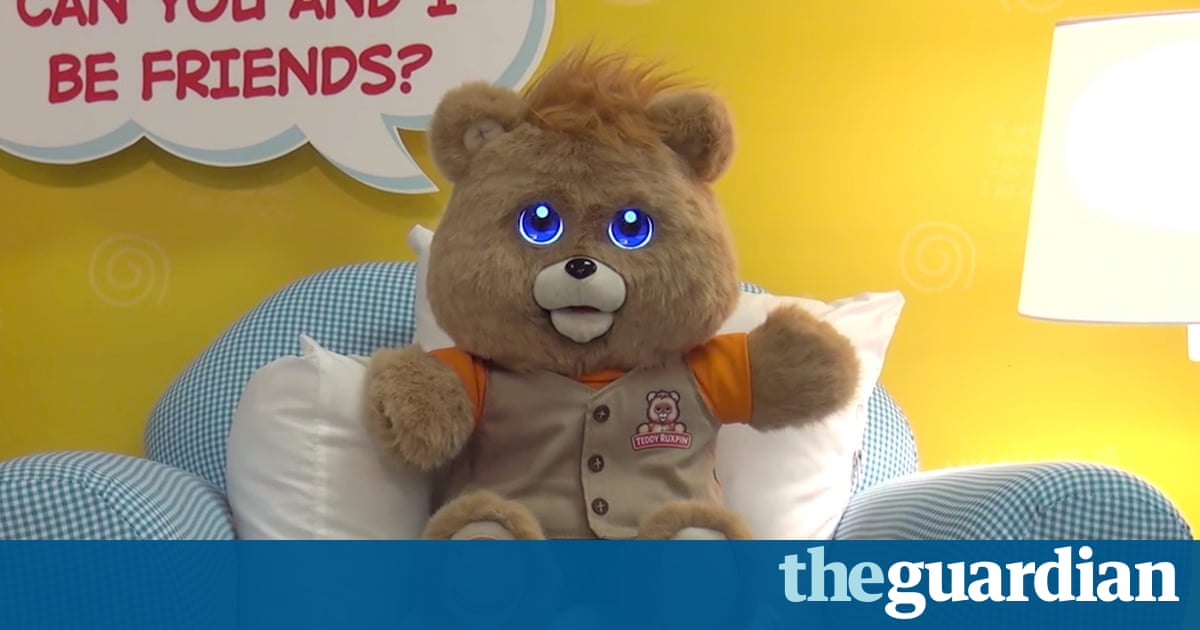 Children of the 1980s, rejoice! Teddy Ruxpin is back. The talking animatronic toy has been given a hi-tech makeover, swapping cassette tapes and plastic eyes for a 4GB hard drive and animated LCD peepers.

Teddy has been resurrected by Wicked Cool Toys, which earlier this year also launched a revamped Cabbage Patch Kid doll. An early prototype of Teddy was showcased at the Dallas Toy Fair this week, although its not scheduled to launch until 2017.

The bear had to come out of the bag, said Wicked Cool Toys co-president Jeremy Padawer, speaking to YouTubes Mommy and Gracie Show. Weve shown Teddy a little early.

The company wants to capitalize on the nostalgia of the first generation of Ruxpin fans, which it dubs The Teddy Generation, who have now grown up and become parents.

Teddy Ruxpin was first launched in 1985 and was an instant hit, racking up $93m in sales (1.4m units) in the first year. It eventually sold more than 8m units and 11m books, becoming one of the best-selling toys of the 1980s, along with Polly Pocket, Glo Worm, Pound Puppies and Glo Worm.

The bear came with a slot for cassette tapes, which it would read to children while moving its eyes and mouth. The toys creator Ken Forsse also wrote an accompanying Tolkien-esque fantasy world, following Teddy and his best friend, a caterpillar named Grubby, as they battled monsters and villains in the quest to find magic crystals. These stories were featured in the toys accompanying story tapes as well as a 65-episode TV cartoon series.

In 2003 Teddy Ruxpin was named by the Toy Industry Association as one of the most memorable and creative toys of the 20th century, and Time magazine later named it as one of the greatest toys of all time.

Despite its popularity, Worlds of Wonder, the company that first made Teddy, struggled following the stock market crash of 1987 and filed for bankruptcy. The licence to manufacture the toy was sold to Hasbro, which released a new version in early 1990s. As the licence bounced to other companies, third and fourth versions were brought out, most recently in 2006 with a version that used digital audio cartridges instead of cassettes.

Teddy Ruxpins play-pattern and infusion of technology was way ahead of his time back in the 80s, and with continued massive parental awareness its the right time to bring back this coveted brand, said Michael Rinzler, founding partner of Wicked Cool Toys, in a statement back in February.

The latest version of the toy comes with a 4GB hard drive that can store 40 stories and can be paired with an iPad app so children can read along to the stories as the toy speaks. To move between stories, theres a button embedded in the toys plushy hand and to switch to a sing-a-long mode theres a button in its foot.

For those seeking a hit of 80s nostalgia, check out the original Teddy Ruxpin commercial: