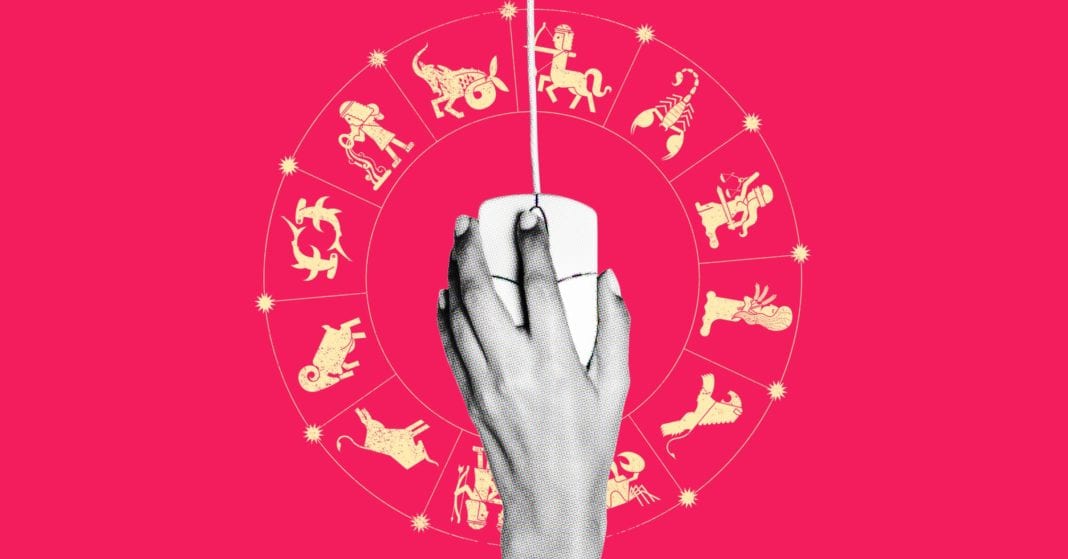 Spend enough time on the internet and you'll inevitably come across Astrology Content™. Maybe you've seen a Game of Thrones meme about Leos, or a Twitter thread arguing why we should all love Taurus season—or perhaps you just have that one friend (they know who they are) who starts off every social media post with "This is a total Gemini thing, but …" It's unavoidable.

Over the past couple of years, numerous publications have tried to explain the how and why behind astrology's online proliferation. It's no secret that people on the internet enjoy hyper-personalized content (who doesn't love a quiz that will tell them what type of bread they are?), but the fascination with astrology goes beyond that. The knowledge regular people have of astrology is no longer limited to horoscopes. Netizens now have an entire framework through which to examine the world—from using charts to analyze rumors that Prince William cheated on Kate to tying the release of the Mueller report to a full moon in Libra.

Yet, as much as astrology has changed the internet, the internet has also changed astrology. The abundance of information online about celestial movements and a seemingly infinite number of people writing horoscopes has transformed the practice from a devout subculture to a subject so popular that there are hundreds, maybe thousands, of social media accounts dedicated solely to star signs.

Perhaps this is unsurprising. Despite what the creators of social media platforms once naively professed, it's clear that the internet is not just a neutral space for sharing thoughts, information, and ideas. Whether it's surveilling of activists of color or, well, any recent election around the world, the tides of the internet (and specifically social media platforms) have the power to significantly shift how people understand real-world circumstances. Astrology, even as a centuries-old belief system, is no different. And just as the internet has altered current events, it has also altered the practice of astrology, turning something that used to require decades of study into something easily Googled.

Anyone who has sought answers from the stars online has probably encountered Susan Miller. One of the internet's most famous astrologers, she's been practicing ever since she convinced her mother to start teaching her at just 15 years old. Miller's site, Astrology Zone, went up in 1995, and she's written thousands of words of horoscopes every single month since then. She's even supplemented her website with a popular app. Miller, perhaps more than anyone else, has seen the impact the internet has had on astrology, and vice versa.

"It's both good and bad," Miller says. "It's great that people are getting to see what astrology can do for them. But the downside is that some people shouldn't be giving [astrological] advice. They should study more."

As with any other discipline, mastering astrology takes years of learning and practice. But as information has proliferated online, the actual expertise someone is expected to have when identifying themself as an astrologer or positioning themself as an authority on the subject has gotten somewhat murky. While the internet has enabled a whole new generation of folks to learn the vocabulary and basics of the field, it's also resulted in astrology becoming something that often gets boiled down into 280 character quips or reaction GIFs—formats that naturally lack complexity and nuance. Sure, it's funny, but some astrologers feel it doesn't accurately represent the discipline they've devoted their lives to practicing.

Courtney Perkins, the woman behind the popular Instagram account @notallgeminis, has heard all the complaints about astrology memes before. "I think that there is truth in the idea that it has been reductive," Perkins says. "But at the same time, I find it frustrating when it's treated as though people who make astrology memes, or even the consumers of astrology memes, are trying to shit on astrology."

Perkins is a writer, and astrology is a subject. She's never claimed to be an astrologer, but she does have knowledge and insight, and her account may be one of the few inroads to astrology some people have. Still, she's making memes, not asking for hundreds of dollars to read strangers' birth charts. And Perkins doesn't see anything wrong with finding the humor in astrology. After all, one of the benefits of its proliferation is that people can understand and enjoy her jokes about the dangers of water signs and what strain of marijuana Libras are, so much so that Perkins now has more than 440,000 followers.

It's not just meme creators who benefit from more information about the movements of celestial bodies; countless astrologers who have large online followings today discovered their interest in astrology with the help of the internet. As Mecca Woods explains, "it used to be that to learn astrology you had to have someone who taught you, or you studied some books, but it was still a very small circle." After exhausting the resources she could find online, she met an astrologer who became her mentor offline. Even today, the majority of Woods' clients find her through her Twitter account.

It's obvious that the internet has increased the accessibility of information about basically everything, opening up infinite possibilities for what can be learned for free. And for many, that's a net positive: Who can complain about everyone having a library's worth of knowledge at their fingertips? But there is a legitimate tension underlying the concerns expressed by Miller and other astrologers: How does one reconcile the value of this increased accessibility with fears about cheapening what it means to be an "expert" in a nonacademic subject—especially when you are relying on that expertise to sell a service?

There are organizations that provide certifications to practicing astrologers, like the International Society of Astrological Research (ISAR) and the National Council for Geocosmic Research (NCGR), but going through the necessary processes to get certified by these organizations costs thousands of dollars and requires courses that are often not widely accessible. While organizations like ISAR and the NCGR can lend legitimacy to nontraditional belief systems or practices, they often fail to consider the origins of practices like astrology in marginalized communities, and the centuries-long history of this type of knowledge being passed down using informal methods.

Consider tarot and witchcraft, which have also been burgeoning online recently and have also historically been practiced by marginalized communities. How would one be deemed an "expert" in either of those practices, if expertise relies on a certification from larger organizations?

Perkins has seen firsthand how accessibility can turn casual consumers of memes into actual astrology lovers. "I do have that wider fan base of people who are just getting into it because they're seeing the memes and think they're funny. But those are also the people who slide into my DMs to ask, 'Where can I find an entry-level book?'" she says.

Mercury isn't in retrograde, so this is the point when everything comes together all nice and neat. Even if it's true that the popularity of astrology online has led to a watering-down of its significance, it seems just as possible that its ubiquity will introduce the field to the next generation of astrologers—people willing and eager to do the kind of study and learning that Miller and others have done.

In fact, the internet could help to bring astrology into the future—and passing judgment on that kind of progress is such a Virgo move.

Appy day: could we fix our mental health on our phone? | Ammar Kalia