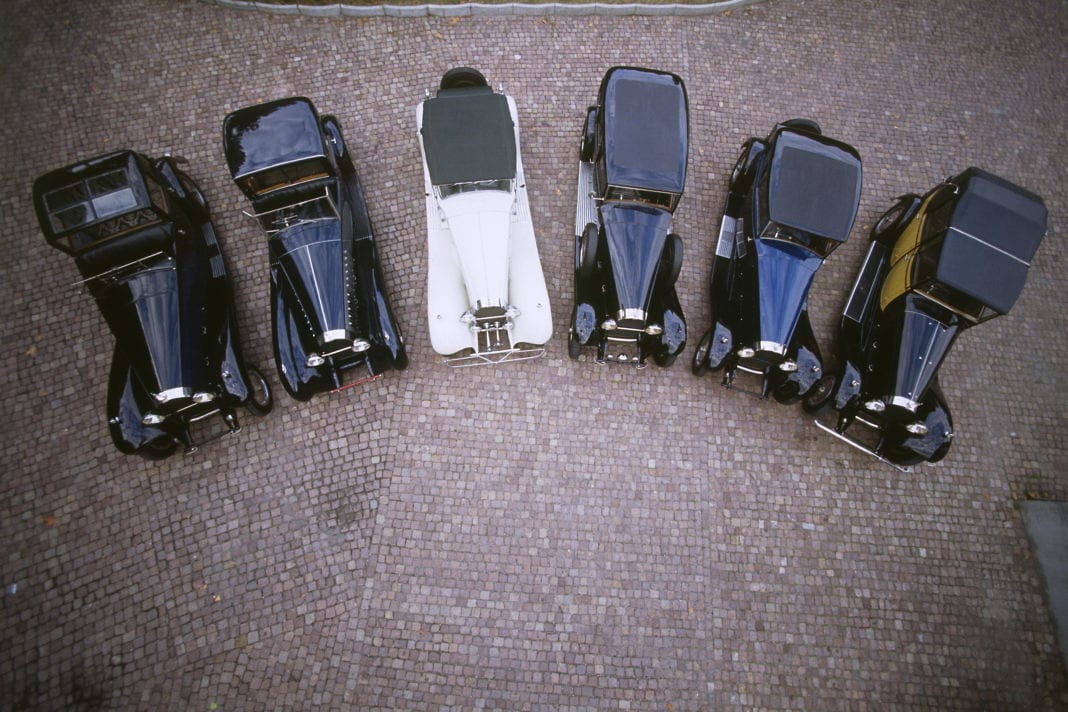 Armin G. Schmidt is founder and CEO of Advanced Telematic Systems, designing and guiding the development of software solutions for the mobility industry. Schmidt has held a variety of positions at innovative technology companies across Asia, Europe and the United States.

The Cit de lAutomobile in Mulhouse, France, is an amazing place. It has the largest collection of automobiles on display, thanks to the Swiss brothers Hans and Fritz Schlumpf and their obsession with cars. The money they needed for their collecting came from their business; the brothers owned a spinning mill for woolen products. Funnily enough, the German translation of Schlumpf is smurf. If anyone remembers the Smurfs, they would call it smurftastic.

Because of their excessive collection and also because of the shift in textile production toward Asia in the 1970s the brothers business eventually became insolvent, so they left France and returned to Switzerland. By that time, their collection of automobiles was so valuable that the French government placed a historical protection order on the collection to save it from destruction, break-up or export, and, in 1978 it was deemed a French Historic Monument by the Council of State.

Some years ago I had the privilege of visiting this place, which is now the largest car museum in the world. Indeed, it is a time capsule for the glory days of the automobile. When you walk through the museums enormous halls, filled with hundreds of classic cars, you see that most of them are from a time when startups (yes, I think you could attribute todays term to those past entrepreneurs) built cars from scratch, creating brands and fighting for their own piece of the new mobility market. Horses were no longer a state-of-the-art form of transportation, thus horse riding ultimately became a luxury hobby, as we now know it.

The first auto boom was fueled by the invention of new technologies and the industrial revolution, which gave startups at that time the chance to engineer and build the first automobiles with a limited amount of funding. For example, in the 1920s, the main construction method was body-on-frame, which allowed a much more modular construction and the combination of parts from different suppliers. Then the unibody designs came and introduced highly integrated cars with more expensive set-up and development costs but with positive cost effects on a large scale. With EV we now see the return of concepts with body-on-frame, like the BMW i3 with a rigid frame housing the drivetrain and battery.

These fine startups produced motor vehicles in a time when the entry barrier was not yet defined by the combustion engine a market that was ultimately dominated for more than 40years by the likes of GM, Ford, Mercedes, Toyota, BMW, VW and others. This left a huge gap between the big guys and the smaller players, such as McLaren, Bugatti, Lotus and others.

Certainly there were startups like DeLorean, Fisker and Artega, but developing a combustion engine car, manufacturing, marketing and selling it, not to mention maintaining a dealer value chain, was (some say still is) a game dominated by size and pure financial power. Successfully creating a new startup in the car category was no easy task. Every venture receiving less than an estimated $100 million investment would fail, sooner or later. Especially for investors, this category was largely viewed as untouchable, due to the extensive risk involved and a low success rate.

We are seeing a large number of new startups aiming to create new cars, commercial vehicles and other methods of transportation.

That all changed with one guy and a roadshow in Taiwan in 2004. He was trying to secure funding there, and in various other places, for his first model: the Roadster. Most components of the prototype car at that time were sourced and developed on this island of 23 million people, which is famous for supplying more than 80 percent of the worlds PC and Notebook manufacturers, delivering nearly all chips for the iPhones and other consumer electronic devices, as well as being known for its own manufacturing powerhouses, including Foxconn, Pegatron and Wistron.

At the time of Teslas launch in 2006, the companys engines were manufactured at the Tesla facility in Taiwan. Elon Musk understood from the very beginning that the IT and automotive worlds would intersect. He secured the initial funding and started to think big not listening to the advice from many so-called experts. Tesla raised more than $180 million by 2009, to deliver 147 cars.

Several years, and billions in investments later, the world sees that Tesla was able to do what other companies never dared attack the traditional heavyweight car industry. Because of computer power, a new level of momentum and the state of evolution, we are now entering another chapter in the Innovators Dilemma This theory, purported by Harvard professor Clayton Christensen, describes when new technologies cause great firms to fail. And more importantly, competitive products have been created that premium companies like Audi, BMW, Toyota and Mercedes now take very seriously.

The huge financial and technology barriers have been broken down. The venture capital world is delighted by the opportunities and has begun to attack this category. Over the last five years the M&A transactions in this space have grown in excess of $220 billion.

Entry barriers based on highly sophisticated production, such as the combustion engine, will be phased out. Electric components are becoming more mainstream. For instance, e-drivetrains are outsourced nowadays to ODMs, such as Magna, and will eventually go to the Foxconns of this world.

But more importantly, Teslas unique advantages in machine learning, and its lack of exposure to legacy systems (internal combustion tech, unconnected cars) give it the chance to tap into larger and faster-growing markets ahead of its competitors. The move from the traditional model without connectivity and computers will change to one of owned autonomy, shared mobility and, eventually, to Autopia-on-demand autonomous mobility.

Dont be surprised if there are Red Bull-branded cars driving around in the near future.

Even the most innovative mobility concepts eventually require a vehicle. In comparison to todays vehicles, they might have a different form factor, or be made from different material, be powered differently and controlled in another way. But someone has to develop, manufacture, sell, maintain and guarantee the vehicle. Existing automakers still have those competencies and the ability to adapt over time, if some parameters can change, as described. They have the knowledge and the processes to turn a profit while still producing such a complex, long-lasting, safety focused product, and they know how to scale it. In addition to this, they have an existing brand, reputation and customer loyalty that will last for a certain time.

The premier brands will, for a certain period, have an advantage. And so do the fast and cash-laden newcomers. We also will most likely see brands and companies focusing on certain mobility niches. Many future developments will be based on still-open questions, such as how new vehicles will be used, how urban and rural area mobility will be separated, how fast e-vehicles and autonomous technology will take the lead and be accepted or how regulations will accelerate or slow down certain development.

Consumers still look for some branding values in the automotive environment. Companies such as Porsche, as well as other premium brands, benefit from this, and therefore wont likely be as affected as other mass-market brands. New and existing brands will be used for cars, as in the past Fender for the VW Beetle, Paul Smith for Mini, Gucci with the Fiat 500 and numerous others. Dont be surprised if there are Red Bull-branded cars driving around in the near future.

Also, even if automotive mobility becomes smarter and cheaper, brands will play their part. Even easyJet, Virgin and Ryanair, a few low-cost carriers in the aviation industry, are brands with positioning. In aviation, the service providers (airlines) are the popular brands chosen by travelers, not the makers of the vehicles (airplanes). This might be an imaginable parallel between the automotive and aviation industries.

Remember the list of car companies exhibited at the Cit de lAutomobile? Startups that have come and gone, leaving museum pieces as their legacy. In the same vein, clearly not all of the current automobile companies mentioned herein will still be around in the next few years but some of them will certainly become dominant fixtures in our everyday mobility.

There are so many new brands and innovations entering todays huge $6.4 trillion (McKinsey) market of mobility that are not only creating cars, but also developing completely new ways of approaching mobility, which will result in fewer fatalities, safer roads and many more improvements.

Some time down the road a museum like the Schlumpf brothers will most likely consist of brands that we all know of today. I am looking forward to seeing a collector gathering together all these new vehicles (the ultimate mobile devices) and creating this museum. It will be interesting for our kids and grandchildren and not simply because its associated with Smurfs. History always repeats itself.