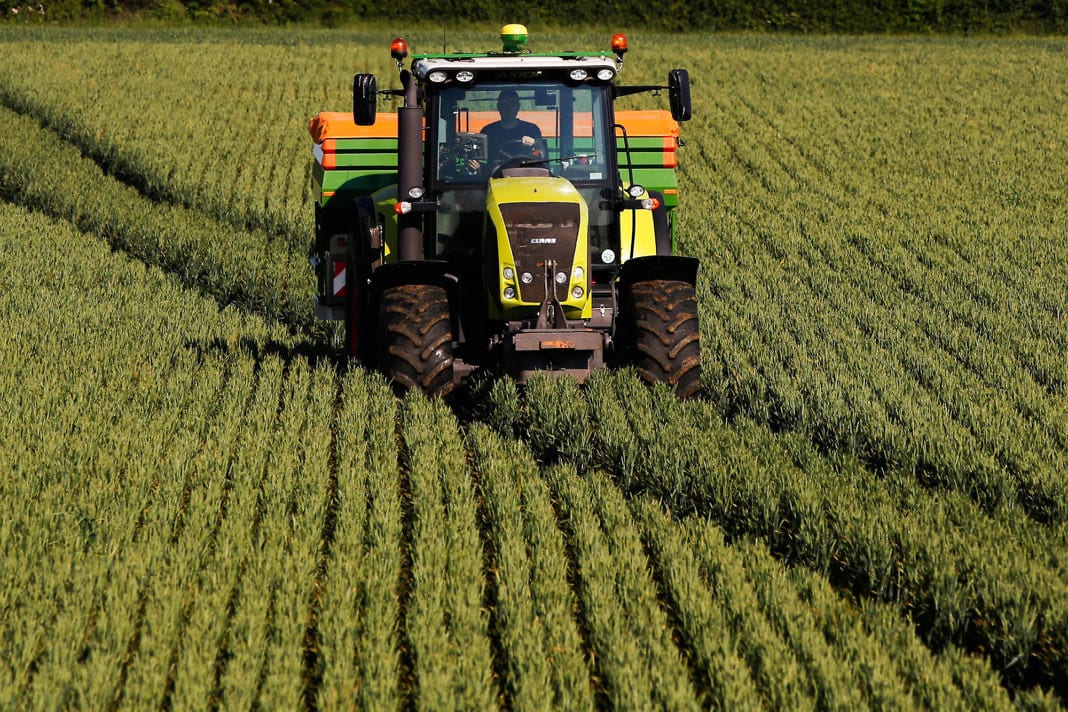 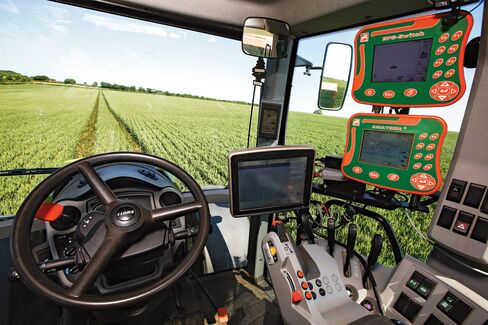 A self-driving John Deere tractor rumbles through Ian Pigotts 2,000-acre farm every week or so to spray fertilizer, guided by satellite imagery and each plots harvesting history. The 11-ton behemoth, loaded with so many screens it looks like an airplane cockpit, relays the nutrient information to the farmers computer system. With weather forecasts and data on pesticide use, soil readings, and plant tissue tests pulled by various pieces of software, Pigott can keep tabs on the farm down to the square meter in real time without ever leaving his carpeted office.

This is becoming more standard, says Pigott, who grows a rotation of wheat, oilseed, oats, and barley on his farm in the rolling Hertfordshire countryside an hour north of London.

German chemical company Bayer cited the growth in such digitally assisted farming as a key reason for its $62 billion bid for Monsanto, which has become a leading provider of analytics used by growers. Bayer Chief Executive Officer Werner Baumann says Monsanto is at the forefront of digital farming. Acquiring the company would further Bayers goal of identifying and providing the best-suited seeds, fertilizers, and chemicals for farms around the world.

If you get the customers attention by predicting what will happen on their farm, you can be closer to them to sell them the seeds and whatever other products you want to sell them, says Bruce Erickson, a director in the agronomy department at Purdue University who tracks farming technology. The promise is immense.

Adoption of digital tools comes amid concerns that food production isnt keeping up with the worlds appetite. Crop yields have remained relatively flat in recent years, even as demand is increasing because of population growth and the rising middle class in developing nations such as China.

Sensing an opportunity, investment is pouring into digital farming. Food and agriculture technology startups attracted $4.6 billion last year, compared with $2.3 billion in 2014, according to AgFunder, an online investing platform.

Monsantos investment in digital agriculture took off in 2013, when it spent almost $1 billion for San Francisco-based startup Climate Corp. Founded by former Google engineers David Friedberg and Siraj Khaliq, Climate Corp. developed an algorithm that helps predict how weather affects crop output. Monsanto added its own data from seed trials and acquired soil and analytics companies. Now its software offers farmers recommendations on what to plant and where to plant it.

Farmers are very excited about new technology if you can show them some value, that its not just some gimmick, says Khaliq, whos now a venture capitalist in London.

We can take our data, walk right into the fields with an iPad or iPhone, pinpoint exactly where we are … and figure out what we should be doing with each parcel of land

Other large agriculture companies are also investing to add technology to their product lines. Tractor maker Deere offers autonomous driving and tools to track real-time usage of seeds, fertilizer, and chemicals. DuPont, which is merging with Dow Chemical, is expanding its Encirca farm management software unit. And Syngenta, which Monsanto tried to buy earlier this year and has agreed to be bought by ChemChina, has made several digital farming acquisitions.

Adoption of digital agriculture has been fastest in the central U.S., where industrial farms put a premium on efficiency. In central Illinois, Dale Hadden has been collecting data to improve the performance of the soybeans, corn, and wheat he grows on his almost 5,000 acres. He creates models to predict yields based on chemical use, soil types, and his lands topography.

We can take our data, walk right into the fields with an iPad or iPhone, pinpoint exactly where we are in the field, and see what the planting rate is, what the amount of nitrogen is, and figure out what we should be doing with each parcel of land, Hadden says. If we have a performance issue in a certain area, we can do something about it.

Still, its early days for such technology. Agriculture is well behind other industries that Ive been involved with in being able to collect and synthesize data and express it as solutions to problems, says Ron LeMay, the former president of telecommunications company Sprint, who founded FarmLink, a data company.

Many farmers, particularly outside the U.S., have taken a wait-and-see approach to find out if adopting digital tools can improve their bottom line. Such software can cost several thousand dollars per year and comes with a steep learning curve. Were still on the cusp of being able to demonstrate at scale the financial returns, says Ros Harvey, the founder of Yield, an Australian startup. Her company, backed by German automotive giant Robert Bosch, uses sensors that allow oyster farmers to determine when contamination makes it unsafe to harvest.

The greatest potential may be in the developing world, where tapping into global communications networks may allow farmers to better manage climate change and other risks by bringing Big Data to the worlds most information-poor regions. Were starting to see the emergence of a digital revolution, says Mick Keogh, the executive director of the Australian Farm Institute. Its moving from decisions based on a farmers skill to decisions based on objective information driven from technologies now available.

The bottom line: Food and agriculture technology startups attracted $4.6 billion in funding last year, vs. $2.3 billion in 2014, according to AgFunder.

Soros To Commit $500m To Help Refugees And Migrants