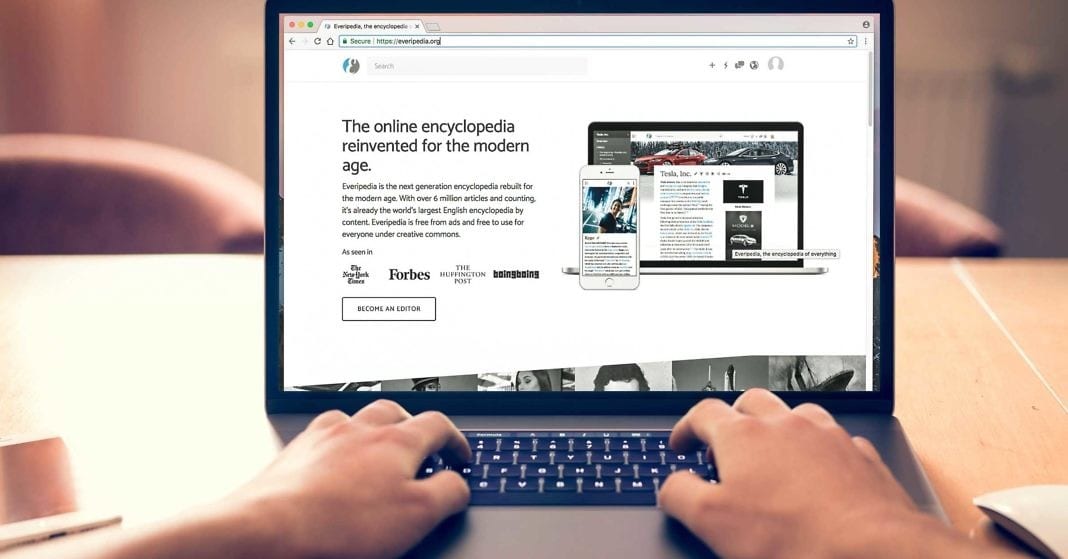 At the time of this writing, the opening sentence of Larry Sanger’s Everipedia entry is pretty close to his Wikipedia entry. It describes him as “an American Internet project developer … best known as co-founder of Wikipedia.” By the time you read this, however, it may well mention a new, more salient fact—that Sanger recently became the Chief Information Officer of Everipedia itself, a site that seeks to become a better version of the online encyclopedia than the one he founded back in 2001. To do that, Sanger’s new employer is trying something that no other player in the space has done: moving to a blockchain.

Oh, blockchain, that decentralized “global ledger” that provides the framework for cryptocurrencies like Bitcoin (as well as a thousand explainer videos, and seemingly a thousand startups’ business plans). Blockchain already stands to make medical patient data easier to move and improve food safety; now, Everipedia’s founders hope, it will allow for a more powerful, accountable encyclopedia.

Here’s how it’ll work. Everipedia already uses a points system where creating articles and approved edits amasses “IQ.” In January, when the site moves over to a blockchain, Everipedia will convert IQ scores to a token-based currency, giving all existing editors an allotment proportionate to their IQ—and giving them a real, financial stake in Everipedia. From then on, creating and curating articles will allow users to earn tokens, which act as virtual shares of the platform. To prevent bad actors from trying to cash in with ill-founded or deliberately false articles and edits, Everipedia will force users to put up a token of their own in order to submit. If their work is accepted, they get their token back, plus a little bit for their contribution; if not, they lose their token. The assumption is that other users, motivated by the desire to maintain the site’s value, will actively seek to prevent such efforts.

The benefits of the move, according to Theodor Foselius, Everipedia's co-founder and CEO, are many. For one, it allows active users to be more than just volunteers. “In places where Wikipedia has the most active user bases, like India, all these people edit for free," he says. “The ability to be a stakeholder in the encyclopedia they edit and get real monetary value back, it’s really exciting to me.”

The value is more than literal, however. Blockchain’s primary advantage, as with turning money into a decentralized commodity, is that it turns Everipedia into a peer-to-peer resource. No more centralized server (and no more server costs). “If everyone on the team got abducted tomorrow,” Foselius says, “the site would keep running.” And perhaps most importantly, distributing the site to users around the world means that Everipedia effectively becomes uncensorable. In nations like Turkey and Iran, where Wikipedia is currently censored, users can contribute to Everipedia—and, yes, get a little crypto-scratch while they’re at it.

This isn’t the first time a company has proposed a decentralized blockchain-based encyclopedia; earlier this year, a company called Lunyr announced similar plans. However, judging from Lunyr’s most recent roadmap, Everipedia will beat it to market with room to spare.

Besides, Everipedia is already a functioning encyclopedia; it currently sees about 3 million users monthly, and touts itself as having more English-language articles than Wikipedia. (Much in the way Wikipedia was built on a foundation of Brittanica.com articles, Everipedia’s founders used Wikipedia’s database as their cornerstone. A live bot compares all ongoing changes, updating the posts as they change while giving priority to Everipedia-based edits. Sound cheap? It's completely kosher by the Wikimedia Foundation's own standards.) Yet, Everipedia’s body of human editors, the lifeblood of any wiki-style encyclopedia, isn’t huge; while the site boasts 17,000 registered editors, only a “couple of thousand” of those are active, Forselius says. Compare that to Wikipedia’s numbers—more than 32 million registered editors for the English-language version, with nearly 140,000 having edited an article in the past 30 days, and upwards of 60 million users a day—and it’s clear that Everipedia has a long way to go to match Wikipedia.

To hear Forselius tell it, though, the site isn’t trying to match Big W; despite starting with Wikipedia's own resources, Everipedia wants to create an entirely new class of of truth-seekers. “Wikipedia is largely older white men,” Forselius says. “We’ve tried to focus on getting a lot of female edits, younger editors, and diverse background and ethnicities.” (A 2011 survey found that 90% of “Wikipedians” are indeed male, and 28% are over 40.)

Indeed, Sanger agreed to join the company not just because of the financial promise of the blockchain, but because it allows the site to overcome the limitations that caused him to leave Wikipedia little more than a year after its founding. “I’m more drawn to the philosophical, epistemological benefits,” he says. “What I look forward to is a knowledge marketplace, so that people are incentivized to contribute what they know.” And soon enough, his Everipedia entry might just include that quote.

Flash Sale! Buy a mobility startup package, get one for free at Disrupt SF

Meet the startups that just pitched at EFs 6th Demo Day (and our top...

4 Ways To Tell You’ll Succeed At A Company Before You Even Accept An...