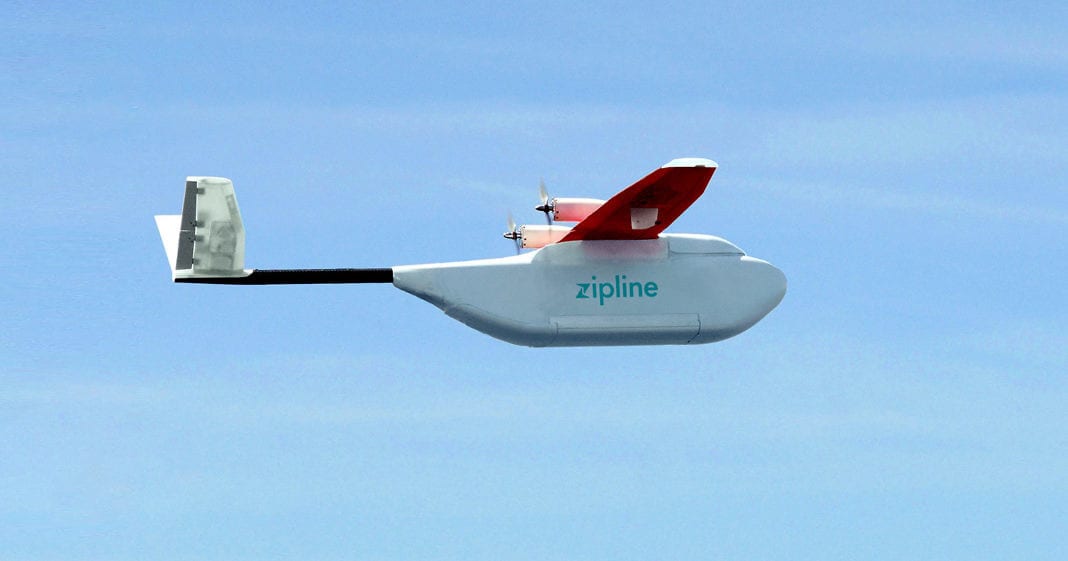 Drones generally fall into two categories: military weapons and annoying toys. Everyone seems to have an idea for making them useful—Amazon wants to use themfor deliveries, Facebook sees them beaming the Internet to remote areas—but so far it all seems so very outlandish.

A California startup called Zipline has a practical plan to usethe devices for good.

Later this year the company, working with UPS and vaccine distributerGavi, plans to deploy a fleet of drones in Rwanda, where the machines will deliver medical supplies. The goal is to see 15 autonomous aircraft flying out of a centralized hub make 150 deliveries each day to 21 medical stations throughout the western half of the country.

The Rwandan government, which has embraced drone technologyand recently approved remarkably progressiveguidelines for its use,is working with Zipline to measure the success of the venture.

Zipline designs, builds, and tests itsdrones in northern California, where it can perform test drops without disturbing anything beyond grazing cows. The drones look like the prototypes they are, with payload mechanisms that use primitive materials like rubber bands for ejection springs and wax paper for a parachute.

The low-tech approach minimizes cost and complexity, essential when working in rugged, remote areas. The payload carrier and parachute are made in-house for 50 cents and designed to be used once, then chucked.

Zipline favors fixed-wing drones because the more common quadcopters “only operate in perfect weather, and tend to fall out of the sky unpredictably,” says founder and CEO Keller Rinaudo. People do not wait for perfect weather to get sick or to have medical emergencies, so if were going to build something thats useful, it has to be able to operate all the time.

Drones make sense when you realize 75 percent of Rwanda’s roads are unpaved and frequently washed out duringthe rainy season, rendering them impassable to the trucks and motorcycles dispatched for vital deliveries.Rinaudo believes his company can match the cost of a motorbike delivery while making those deliveries in far less time. He believes the eventual addition of a second hub would expand deliveries to the entire population of 11 million people.

The process starts with a doctor or nurse requesting supplies via text message. If all goes to plan, a drone operatorwill retrieve the supplies from a central warehouse, stuffthem into a padded cardboard box, and place the payload in the belly of a drone. Clip a fresh battery to the nose, upload the flight plan from an iPad, and you’re ready to fly.

A pneumatic catapult sends the drone aloft, and twin electric motors keep it there as it flies autonomously to the GPS coordinates programmed into the flight plan. The drone cruises at around 60mph and can operate within a radius ofabout 45 miles—plenty, given that Rwanda is about the size of Vermont—at an altitude of 300 to 400 feet. Upon reaching its destination, the drone descends to 45 feet and deploys its payload. Sophisticated software accounts for things like wind speed, allowing the drone to hit a target about the size of four parking spaces.

Zipline will focus on delivering blood for treating severe trauma or hemorrhaging after childbirth, a frequent cause of maternal death in Africa. Storing blood is difficult in regions with spotty electricity, and a lot of the blood and medicine stockpiled in rural areas goes to waste. Storing such things centrally and deploying them as needed makes far more sense.

UPS helps here, providing $800,000 and its logistics expertise to get things started, says Ed Martinez, president of the UPS Foundation, the company’s philanthropic arm. He concedes that UPS benefits too, learning more about drone deliveries.

We need an elegant solution to be able to deliver stuff quickly, to where it is needed.Seth Berkely, CEO of Gavi

The drone-port that will deploy the autonomous aircraft fits in a shipping container, making it easily deployed after, say, a natural disaster. Others have the same idea. Google’s Project Wingcould deliver disaster relief, and the Bill and Melinda Gates Foundation is exploring using delivery drones for vaccines.

Using drones for humanitarian projects could foster greater acceptance of technology many peopleassociate with warfare, surveillance, and idiots flying too close to firefighters and pilots. And testing that technology in a country like Rwanda, which has fewer regulations and less cluttered airspace than the US, could hasten advances and create a model for “just in time” delivery of medical supplies that others, including the US and Europe, could follow.

“We need an elegant solution to be able to deliver stuff quickly, to where it is needed,” says Seth Berkely, a physician and CEO of Gavi. So instead of dropping bombs and taking lives, drones could drop blood and save them.

An Equity deep dive on Patreon