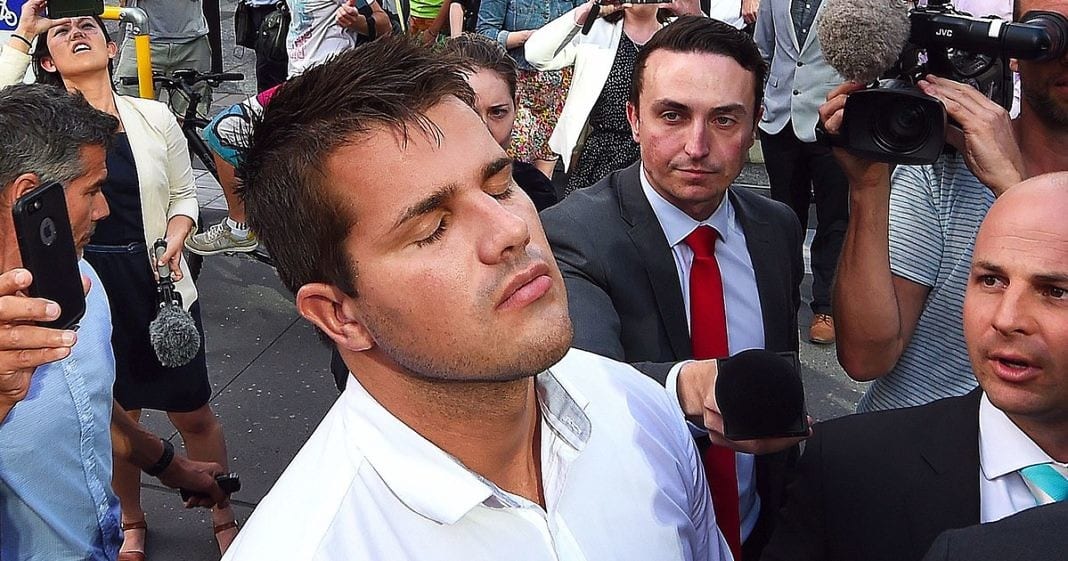 Gable Tostee, the Australian man found not guilty Thursday of the murder of New Zealand tourist Warriena Wright, posted a long account of the fatal evening on a body building forum in 2014.

It’s the latest digital twist in a tragic saga, which played out to a significant degree on social media and dating apps.

The pair originally met on Tinder, and Tostee’s trial was almost aborted after a juror posted about it repeatedly on Instagram. The case was also vociferously dissected in private Facebook groups.

Tostee, 30, a regular on the forums of bodybuilding.com under the username GT, wrote a post titled “Regarding the balcony tragedy” in 2014, just months after the 26-year-old woman fell from his apartment balcony on Aug. 8, 2014.

Wright fell 14 floors after he locked her out on his balcony. The pair had met in person for the first time that evening in Surfers Paradise, Queensland, and had returned to his apartment where they drank and listened to music.

Tostee, who plead not guilty in the Queensland state Supreme Court, maintained he was “de-escalating” the situation by locking Wright out after she became erratic and aggressive.

The prosecution argued that Wright was so fearful of Tostee she felt climbing from his home was her only method of escape.

In the bodybuilding.com post, he gave his account of the evening, including photos of his apartment. He defended himself for first calling his father and buying a slice of pizza after the incident two events seized on in media reports.

“While I was waiting to meet my Dad I bought a slice of pizza to curb my hunger and anxiety. It was the most convenient thing I could find at that hour,” he wrote.

“The suggestion that I casually or leisurely indulged in a meal is absolutely outrageous. I was anything but casual. I had to eat because I was hungry, anxious, and intoxicated, and a slice of pizza was the easiest meal I could find.”

Tostee also took aim at press reporting about the case, calling it “disgraceful.”

“From day one all they cared about was having a story. They don’t care about the truth or right or wrong. They have no respect for the dignity of the people involved. A young woman had died and they needed a villain,” he wrote, while lamenting his curfew and the stress of awaiting trial.

The fateful evening itself was captured by an hours-long recording made by Tostee on his phone, which he also tried to explain.

“I regularly made audio recordings of my drunk nights on the town in case something happened,” he said. “It’s so easy to do using a smartphone and comes at such a small cost, and sometimes the recordings have been invaluable.”

Dubbing him “Balcony Brah,” most commenters seemed to pledge their full support to Tostee, also including their admiration for his apartment and view. Disturbingly, the thread contains a poll titled “Is GT/Balcony Brah guilty or innocent?”

It’s not clear why Tostee chose the forum to share his story, but he wrote “I figured that being a long term member here I would post it here in public for anyone to read in its entirety.”

Tostee was acquitted of murder and manslaughter by a jury Thursday.

BONUS: Plastic bottles are bringing light to the poorest parts of world