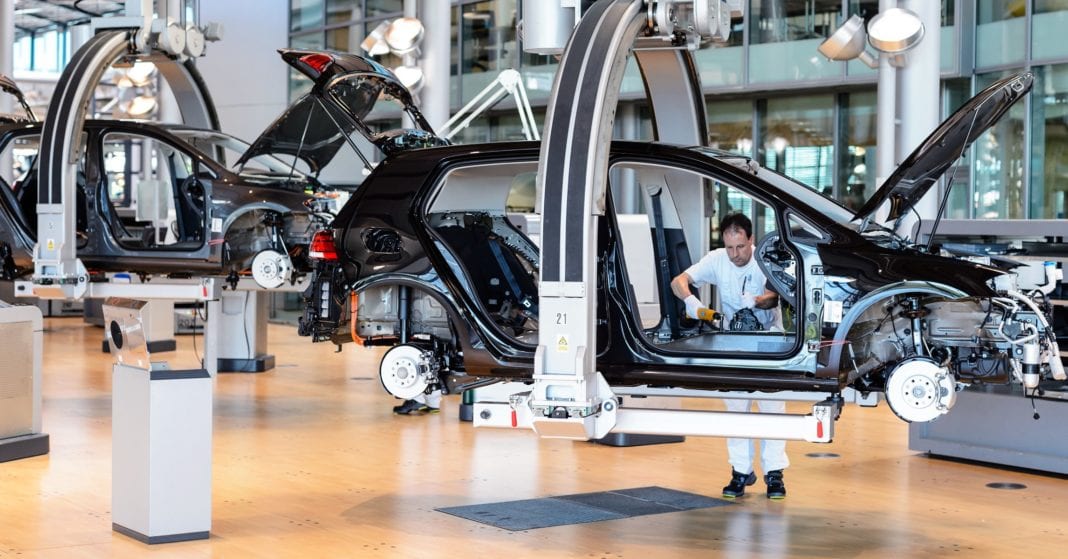 Four years after getting caught cheating emissions standards with millions of diesel-powered cars, Volkswagen has become the most (outwardly, at least) zealous of converts to an electric future. By 2028, it intends to offer 70 battery-powered models. To make that happen, it’s retooling 16 factories to build electric cars. It’s pushing suppliers to ramp up battery production and has already locked in battery supplies for 15 million vehicles, CEO Herbert Diess told Automotive News late last year—a huge number even for a company that builds 10 million cars annually. But the conversion hasn’t been entirely smooth. Last month, reports surfaced that VW luxury arm Audi will build 10,000 fewer electric E-tron SUVs than expected, because of a battery shortage.

Now, Volkswagen is taking some of the battery building burden in-house. It will spend nearly €1 billion ($1.12 billion) to build a production plant near its German headquarters, working with an unnamed partner, it announced Monday. Where most automakers either buy battery packs from suppliers or buy cells and make them into packs, VW is getting involved in the production of the cells themselves. The company offered scant details on when the plant will come online or what capacity it will offer. But this is a bold move for an automaker that, whatever its past sins, seems set on dominating an age built around batteries.

VW isn’t the only automaker betting big on electrics. General Motors, Ford, BMW, Mercedes-Benz, Volvo, and others have announced plans to introduce a bevy of new EV models in the next few years. That’s not counting a crop of all-electric startups, many coming out of China, or industry stalwart Tesla. While VW has the extra motivation of wiping the Dieselgate scandal from public memory, the key driver is regulation. European countries like France, the Netherlands, Norway, and the United Kingdom plan to ban the sale of gas and diesel cars in the decades to come. So does India, a quickly growing market. And China, the world’s largest car market, has some of the strictest rules around electrics.

The point is, everyone’s getting into batteries, and VW wants to make sure it will be able to get enough of them, even if it means making them itself. In the near term, that may mean making sure suppliers can pump out enough batteries, as the E-tron shortage makes clear. Looking five and 10 years out, the concern may be more about ensuring that VW, and not its myriad competitors, gets the batteries that are being made.

If all this sounds familiar, it’s because this is how Tesla operates. Since 2016, Elon Musk’s automaker, working with Panasonic, has been building its own batteries at its Gigafactory outside Reno, Nevada. Last year, it hit a production rate that, if kept up for a year, would have made 20 gigawatt-hours of battery power—enough for 200,000 top-of-the-line, 100-kWh Tesla cars.

Whichever company is helping VW run its plant will likely play a key role. That’s because building batteries for cars requires exquisite control of materials and manufacturing. Many smartphones use one battery cell, so if minor differences between two cells result in slightly different capacities, it just means somebody gets a few more minutes of Twitter time than somebody else. But even minor differences in the capacity or quality of the 500 or so cells that make up a pack can undermine the performance or safety of the entire vehicle. (Tesla uses smaller cells than most; its batteries contain 5,000 or more cells.) “Cells have to be identical from a quality perspective,” says Jay Whitacre, who runs the Scott Institute for Energy Innovation at Carnegie Mellon University. “Only the very best producers can make lithium-ion batteries for automotive use.”

Still, there are enough producers—Panasonic, LG Chem, Samsung SDI, SK International, and others—that this is a buyer’s market, Whitacre says. Automakers can command rather low prices, which they’re eager to do for the most expensive bit of an electric vehicle. The bigger concern for the carmakers is locking down supply.

So it’s not surprising to see VW take some of that production into its own hands. Building batteries in Germany, within a few hours drive of more than half a dozen of its factories, should also save on shipping. The safety concerns around shipping lithium-ion batteries can come with surcharges as expensive as the batteries themselves, says Rebecca Ciez, a postdoctoral fellow at Princeton’s Andlinger Center for Energy and the Environment.

Setting aside Dieselgate, Volkswagen became one of the world’s top automakers with a reputation built on scale and efficiency. Now that it has dedicated itself to going zero emissions, it’s doing everything it can to adjust its know-how to a different kind of supply chain and manufacturing process. This new plant is just one part of that. “With their global reach and volumes, more than any other company on the planet, it makes sense for them to build their own batteries,” says Karl Brauer, an industry analyst with Kelley Blue Book. And maybe, in the process, rebuild a reputation tarnished by diesel emissions, from the cellular level up.

The 12 startups making their case at ERA Demo Day

Omni storage now earns you money by renting out your stuff