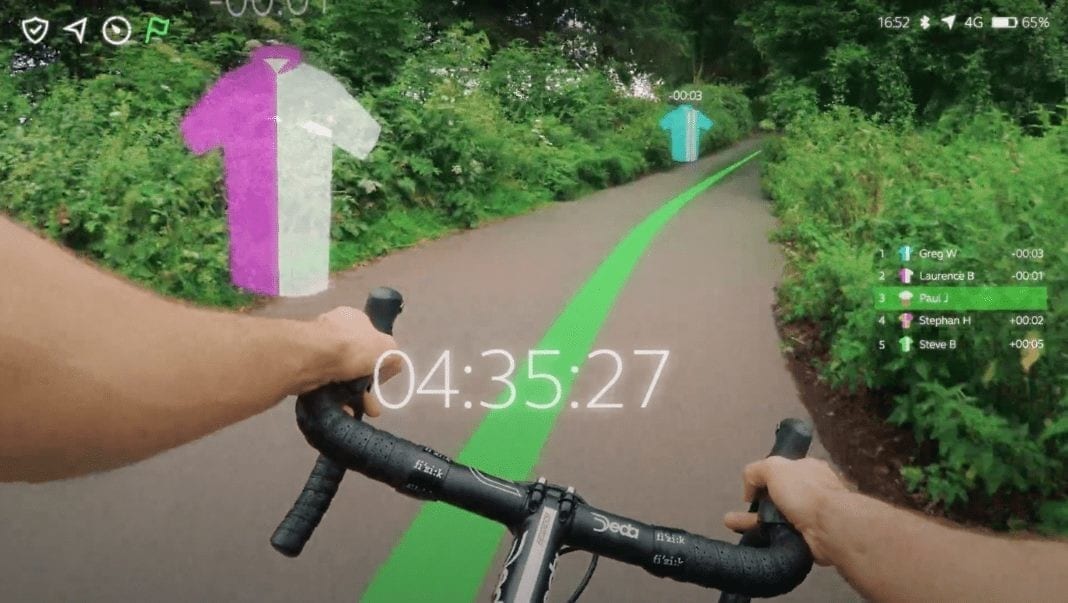 WaveOptics, a UK startup that builds waveguide-based optics technology based on hologram physics and photonic crystals for augmented reality hardware, has raised $16 million (12 million) to help build the next phase of its business.

The Series B round of funding which comes from previous investorsOctopus Ventures,Touchstone Innovations plc andRobert Bosch Venture Capital GmbH; along with new investor Gobi Ventures (the prolific VC firm out of China that also manages one of Alibabas entrepreneur funds) is one of biggest of the year for AR startups out of Europe, and comes on the heels of significant business wins for WaveOptics.

Sumanta Talukdar, who co-founded the company with David Grey, confirmed to me in an interview that WaveOptics is working with some significant, large tech companies on AR hardware, beyond products with its strategic investor, Bosch. (For the record, he laughed but also declined to comment when I straight-out asked if those companies included Apple and Google.) The first products, he added, are likely to hit the market next year and are aimed at both the consumer and enterprise markets.

He also declined to give me a valuation for his company. Notably, when I saw WaveOptics pitch at a London event last year (at Pitch@Palace), the company touted its significantly more modest budget when compared to some others in the AR field: and in fact prior to this Series B it had just raised only around $400,000.

Magic Leap, as one comparison, has raised $1.4 billion; and enterprise-focused Daqri has disclosed $15 million in funding, but we and others haveheard through the grapevine that its secretly been raising significantly more and is now valued at $1 billion. Both are building hardware, so that is one reason for the higher numbers overall.

Indeed, weve seen a number of AR firms come to market building vertically integrated solutions covering both the software and hardware stacks, as well as software and apps that create experiences based on the basics of AR as currently works in existing hardware (such as Blippar, which also happens also be an investor in WaveOptics). What WaveOptics focuses on is something in between these two.

The company is building optics technology that can be used across different hardware, which it believes could change the rulebooks for where AR can be used, and how it can be used.

Up to now, while there have been some very powerful AR optics, they fall on their form factor: the resulting devices are just too big. Those that are small compromise on performance, by not giving users the ability for immersive experiences.

And up to now, hardware that has achieved both of these qualities in one device ideal size and performance has turned out to be too expensive to make. Being able to address all those things performance, form factor and scalability is what sets us apart, Talukdar said.

ARopticswith great user experience and affordable cost in the mass production is the key for market adoption of AR products, said Hongquan Jiang,Partner at Robert Bosch Venture Capital GmbH, in a statement. WaveOpticswaveguides could become a game changer in this respect for the AR industry. We are very excited about the company and expect much synergy betweenWaveOpticsand Bosch in a variety of AR applications.

A demo video on the companys website whose URL is enhancedworld.com gives you an idea of what WaveOptics is working on. The video takes the user through a quick journey with a cyclist who is able to check his bikes diagnostics, get on the bike, navigate the roads, monitor his vitals, and track a virtual race route along the way the idea here is that the system is capable of very fast, real-time processing of images and delivering back data to a user in an active, fast-moving environment.

The video is not just a symbolic vision of what we would like to do, said Talukdar. It represents a real use case.

Going forward, it looks like there is still need and room for more development, however.

WaveOpticshas made significant technical and commercial progress since the investment round we led in October 2015, with very positive feedback from industry on its initial beta products. This new funding will allow the company to complete its product development and position itself as a leader and key technology enabler of highly compelling AR experiences, said Robert Bahns, director at Touchstone Innovations, in a statement

Many companies like WaveOptics, developing elements of AR and VR services rather than the end-to-end product, have become hot acquisition targets for tech giants that are working on their own AR strategies, Apples acquisition of Metaio in 2015 being one example (Apple has yet to release any AR or VR hardware of its own). WaveOptics for now looks to be focusing on building its product and client base rather than exiting. Talukdar declined to comment on any acquisition offers.

As this round shows, we are continuing to build a lot of significant value over the coming months for our investors, he said.

It is not the only company in the space: two close competitors include Lumus in Israel, which has also raised significant funding; and Dispelix out of Finland.

WaveOptics believes that it has a stronger approach than these others. WaveOpticsis reinventing the AR market, bydeveloping a series of new AR display tech that enables a wider field of view and brighter full colour images a unique combination in todays market, saidMartin Harriman, Chairman,WaveOptics, in a statement. This funding round further accelerates development of our industry-leading technologies and enables us to launch programmes in new markets and territories. We are excited about the team of investors we have on board who share our vision.

With founders out, Rocket-backed Nestpick reboots as apartment rentals aggregator