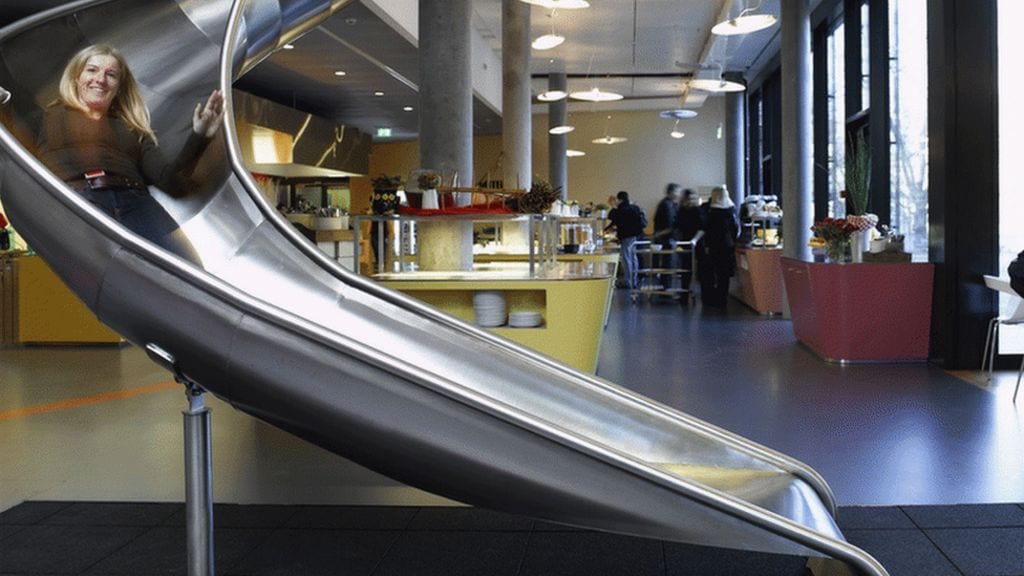 Google’s headquarters in Zurich has a massage room, aquarium and a slide to deliver engineers smoothly and quickly to the canteen.

Deloitte’s Amsterdam office was designed with one empty room on each floor for employees to put what they wanted in them – most have gone for games such as table football.

At LinkedIn’s Californian HQ there is a music room, stocked with keyboards, drums, guitars and audio equipment.

And allowing employees to bring their pets to work is increasingly common.

So when did our offices turn into playgrounds, and does this represent the new way of working?

Technological advances mean that staff can avoid the drudgery of commuting and work from home, coffee shops, or any number of exotic locations. So some companies are working extra-hard to make their offices more attractive places to be.

A recent report from US software giant Citrix forecast that by 2017, some 50% of businesses would have a mobile working policy, and by 2020, 70% of people would work away from the office as often as they worked at a desk.

This is partly due to bosses realising not all jobs need to be done from an office, but also because employees are increasingly demanding a better work-life balance, she adds.

That doesn’t mean that the office will die, though.

“Offices will become places of collaboration and connection because culturally we need touch points as we are social animals,” she says.

Citrix has installed “genius benches” at its London headquarters – essentially higher and longer shared desks that come with stools, not chairs.

There are also moveable desks, like the ones at headphone maker Skullcandy’s office in Zurich. The desks can be configured to work individually or collaboratively, fitting together like puzzle pieces.

Meanwhile, marketing firm Barbarian Group has created a “super-desk” at its New York office which sits up to 170 people, and includes archways where staff can go for private chats.

And Lego has taken hot-desking to the next level at its London and Singapore offices, introducing a system called activity-based working, which means that no-one has a fixed desk any more.

More features about the Future of Work

Space is divided into flexible work zones with no fixed seating and no offices for managers. Employees who leave their workspace for more than one-and-a-half hours need to take all their stuff with them.

Lego even has a department for “new ways of working” and, says senior director Sophie Patrikios, the experiment has gone well.

“In our May 2016 survey, 88% of staff said they liked the choice of where to work. They get a choice of different settings to suit their activity or mood, including a quiet library, a buzzing social area with background music, comfy chairs in cosy corners or big banks of desks to share with team-mates,” she says.

Offices are also getting smarter. Research firm Gartner says commercial buildings are already at the forefront of the “internet of things” revolution.

Smart lighting, heating, and even sensors that measure how many people are in an office, are becoming commonplace.

Such technology plays a vital role in making buildings work more efficiently, but also raises questions about employee privacy and what happens to the data being collected.

“We are building healthier offices that use more daylight, have systems that maintain a constant temperature that eliminates mould and dust, and therefore reduces the rate of illness among employees,” he tells the BBC.

Using computer simulation, Mr Maessen can work out the optimum number of windows for a building – no more than 40% of it should be glass, apparently – as well as factors such as the ideal air flow.

The buildings he designs have no air-conditioning, using instead a geothermal system that takes advantage of the constant temperatures found underground.

Warm water is pumped in over winter and cooler water during the summer months.

The company uses wood-fibre bricks that breathe better and, as they are made from by-products from saw mills, are also more environmentally-friendly than traditional bricks.

Occupants of his offices can use an online tool to provide feedback on their welfare and make complaints. Positive feedback has been “very high”, Mr Maessen says.

Hot-desking will become standard, he says, and buildings will have to adapt to different uses.

“Over several decades, the occupancy will change. What was an office may become flats or retail space. Clients will also want to experiment with different configurations of their interiors,” he says.

“In 20 years maybe we won’t work a five-day week, it may be that we work just three days a week, and we have to try to design a building that can accommodate those changes.”

In future, office spaces will also be closer to where people live, he believes.

And communities will have communal office space that can be used by anyone, he predicts, cutting down on the need for travel.

Lego’s Ms Patrikios agrees that big changes are on the way.

“We’ve already seen that work is no longer somewhere you go, but something you do,” she says.

A greater shift towards flexible working and people having multiple part-time roles, rather than a job for life, will exacerbate the change.

In the future, “going to the office” will mean much more than just “going to work”.

Where venture capital has peaked