TikTok is further investing in social commerce with today’s announcement of a new global partnership with e-commerce platform Shopify. The deal aims to make it easier for Shopify’s over 1 million merchants to reach TikTok’s younger audience and drive sales. The partnership will eventually expand to include other in-app shopping features, as well, the companies said.

At launch, the agreement allows Shopify merchants to create, run and optimize their TikTok marketing campaigns directly from the Shopify dashboard by installing the new TikTok channel app from the Shopify App Store. Once installed, merchants will have access to the key functions from the TikTok For Business Ads Manager at their disposal.

These ad tools allow merchants to create native, shareable content that turns their products into In-Feed video ads that will resonate with the TikTok community. Merchants will be able to target their audiences across gender, age, user behavior, and video category, and then track the campaign’s performance over time. The campaigns’ costs will vary, based on the merchant’s own business objectives and how much they want to spend.

As a part of this effort, Shopify merchants can also install or connect their “TikTok Pixel” — a tool that helps them to more easily track conversions driven by their TikTok ad campaigns.

Currently, e-commerce merchants can track user actions like a user browsing their page, a registration on a website, adding items to their cart, placing an order, and completing the payment. 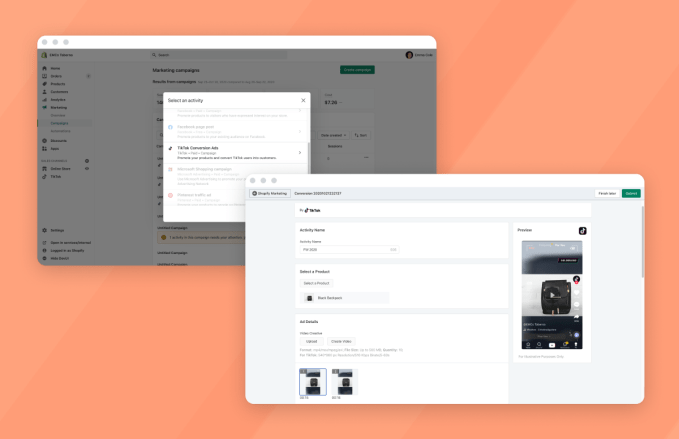 Shopify tells TechCrunch a small number of merchants previously gained access to these features as part of a beta test. But as of today, Oct. 27, the product is being made available to all merchants across the U.S.

“TikTok is one of the world’s fastest growing entertainment platforms with over 100 million highly engaged users in the U.S. alone,” said Satish Kanwar, Vice President of Product at Shopify, in a statement about the new partnership. “The TikTok channel means Shopify merchants—even those without a strong TikTok following of their own yet—can connect with these new audiences using content that feels authentic and genuine to the TikTok experience,” Kanwar added. 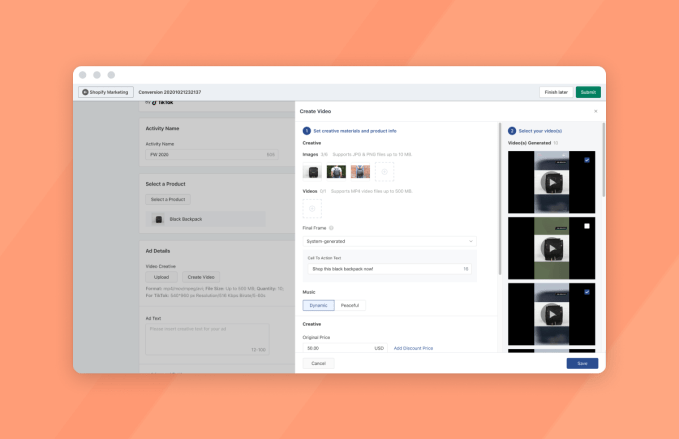 To get started with the new features, merchants who want to advertise on TikTok will first install the TikTok channel app, then create and connect their TikTok For Business account and install the one-click pixel. They can then deploy In-Feed shoppable video ads by selecting the product they want to feature using ad templates specifically designed for commerce. Because these templates use existing imagery or videos, the TikTok channel can work for merchants of any size, Shopify notes.

To kick off the partnership, merchants are being offered a $300 ad credit to get started with their first TikTok campaign.

In addition, the two companies have partnered on their first co-branded Hashtag Challenge Plus campaign, #ShopBlack, to celebrate Black-owned businesses. Shopify had earlier featured Black-owned businesses in its own app, Shop. But from Nov. 10 through Nov. 15, the TikTok community will be able to browse videos from over 40 Shopify merchants via the new hashtag and its accompanying branded effect within TikTok, too.

Shopify and TikTok had been working together to test various social commerce initiatives ahead of today’s announcement.

The companies, for example, had been spotted trialing a new shopping button that allowed TikTok creators to link their Shopify storefront from their videos. (Teespring was also testing this with TikTok). TikTok had offered a TikTok Ads Pixel for Shopify merchants before today, as well.  But the partnership makes the pixel integration a 1-click install, so merchants don’t have to manipulate code.

“We are delighted to partner with Shopify and provide a channel for their merchants to reach new audiences and drive sales on TikTok,” said Blake Chandlee, Vice President, Global Business Solutions at TikTok, in a statement. “As social commerce proliferates, retailers are recognizing that TikTok’s creative and highly engaged community sets it apart from other platforms. We’re constantly exploring new and innovative ways to connect brands with our users, and Shopify is the perfect partner to help us grow and expand our commerce capabilities globally,” he said.

TikTok and Shopify’s partnership won’t be limited to the new TikTok channel app, however. That’s just the first step.

We understand the deal will soon expand to other shopping features, too.

TikTok says it plans to start testing new in-app features that will make it easier for users to discover Shopify merchants and their products by expanding their reach through video and on their account profiles. These features will also “let users browse merchant’s products and shop directly through the TikTok app,” a spokesperson said. They didn’t offer specific details about the features or how the payments portion would work, saying that more information would be available when the new tools launched.

However, the features will launch to a limited beta group of testers soon, a TikTok spokesperson confirmed.

Shopify isn’t the first to recognize TikTok’s potential as a new type of social shopping platform. Its ability to drive merchant traffic and sales was a key reason for Walmart’s participation in the TikTok-Oracle deal — a deal whose current status is still unknown, of course, given the ongoing TikTok lawsuit and the upcoming Presidential election whose outcome could impact the Trump Administration’s TikTok ban.

TikTok itself has been steadily ramping up its tools for merchants and other social shopping features. To date, it has  experimented with allowing users to add e-commerce links to their bios; launched “Shop Now” buttons for brands’ video ads; and introduced shoppable components to hashtags with the e-commerce feature (soon to be used for #ShopBlack), known as the Hashtag Challenge Plus.

Shopify, meanwhile, has been working to deliver more tools that give smaller businesses the ability to compete against Walmart and Amazon, while at the same time partnering with Walmart to give its merchants broader reach.

The TikTok-Shopify partnership could help the video platform better compete against other sources of social commerce, including the growing number of live stream shopping apps as well as efforts from Facebook and its family of apps. The social giant has recently rolled out a bevy of shopping-focused updates across Facebook, Instagram, and — just last week — WhatsApp, with the goal of directing users to shop in its apps, then check out seamlessly with Facebook Pay.

TikTok says the new TikTok channel for Shopify merchants is available today in the U.S. It will roll out to other markets next year, including elsewhere in North America, Europe and Southeast Asia.

Daily Crunch: Quibi is shutting down