As social media platforms struggle to get U.S. election misinformation under control with varying degrees of success, TikTok has taken new actions to stop people from searching and browsing select hashtags associated with misinformation and conspiracies related to the U.S. election results.

The video app has redirected some hashtags — including #RiggedElection, #SharpieGate and others — where users have been publishing election misinformation. And it has taken down various videos making claims of “election fraud.”

However, based on our scans of the app and other election-related hashtags today, it’s clear that it’s still an uphill battle for TikTok in terms of getting a handle on violating content.

Because of TikTok’s size and scale, even smaller videos from unknown publishers can rack up thousands of views before they disappear.

Media Matters, for example, reported yesterday it was able to identify 11 examples of election misinformation spreading across TikTok, with more than 200,000 combined views. The videos shared conspiracies that ranged from unfounded “magic ballot” narratives to the completely untrue allegations that Arizona poll workers handed out markers to Trump voters so their votes wouldn’t count. 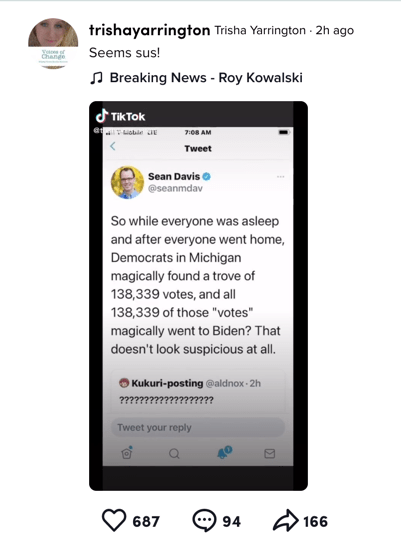 TikTok says all the videos Media Matters reported have since been removed except one where a user made a premature declaration of victory. That one was shadowbanned — meaning its discoverability on the platform was reduced. It also has a banner pointing to authoritative information about the election results.

These individual takedowns are a drop in the bucket compared to the number of videos that are still out there making claims of election fraud. And, so far, TikTok has only removed a small number of hashtags on this subject.

TikTok confirmed it has removed content and redirected searches for the hashtag #RiggedElection as of yesterday. Now, when you try to find videos flagged with this term in the app, you’ll get to a blank page with a notification that says the search term “may be associated with behavior or content that violates our guidelines.” The page also provides a link to TikTok’s Community Guidelines.

“Promoting a safe and positive experience is TikTok’s top priority,” the message reads.

This is the same playbook that TikTok recently used to address the spread of QAnon-related content on its platform. By redirecting searches and hashtags, it makes misinformation harder to find.

TikTok’s QAnon ban has been ‘buggy’

While TikTok declined to share an exhaustive list of hashtags it has taken action on during the elections, we found a few hashtags that returned either no results — like #RiggedElection and #SharpieGate — as well as those that returned only a small handful videos, or what TikTok considers “counter speech.”

The TikTok community will often create videos with counter speech or other content related to a misinformation-related hashtag. In these videos, they’ll provide factual information or will dispute the claims being made in another video. TikTok says this sort of counter speech doesn’t violate its policies. That’s why you may see videos listed under hashtags that would otherwise be associated with misinformation, as opposed to seeing the hashtag entirely silenced.

We also found some lesser-used hashtags like #RepealtheSteal and #VeritasArmy, which have been seen on Twitter, were not showing on TikTok at all. (However, upon reaching out to TikTok, the company chose to redirect these hashtags, too.)

While some hashtags had little content, many were filled with videos that weren’t just expressing their political views — they were making claims of election fraud. Combined, these hashtags have tens of millions of views, or even more.

For example, when we searched for the hashtag #VoterFraud (20.9 million views), we first encountered videos posted in the months leading up to Election Day that were responding to the Republican-driven claims of voter fraud associated with mail-in ballots.

But many videos under this hashtag have been published by Trump supporters this week, and are videos where the supporters are directly disputing the election results.

Among the videos we found were those reposting videos TikTok had already taken down. These included videos featuring Trump supporters’ protests against or for the counting of ballots in various states, calling them proof of election fraud.

In other videos, users opine about how Trump’s lawsuits will prove fraud took place and win him re-election. They sometimes use screenshots of website vote tallies as their “proof.”

We also saw videos using text labels overtop their video footage. The text was used to make their claims of election fraud, while the video itself may have them talking in more measured terms about their disappointment with the election results. (It’s unclear if this is a viable workaround to avoiding rule enforcement, however.)

TikTok says its list of blocked hashtags continually grows as new terms and phrases emerge and it’s able to determine how the terms are being used on its platform. It also said it block more election misinformation hashtags in the hours, days and weeks to come.

To be clear, TikTok’s decision to keep this sort of content online doesn’t make it much different from other social networks.

During election season, Facebook and Twitter have taken to labeling election misinformation from high-profile accounts (like Trump’s). Facebook even ran in-app notifications to inform users that votes are still being counted. But both platforms today still easily allow users to click through on a wide range of hashtags that promote this idea of election fraud or rigged results.

Once TikTok has made the decision to ban a term like “SharpieGate,” for example, the content won’t be surfaced whether you use the hashtag symbol (#) itself or not. Facebook, on the other hand, may ban the hashtag specifically, but not the term entirely. That means you can still find content about SharpieGate on its platform — even if it’s largely posts and videos from news organizations.

#SharpieGate was also among the hashtags Facebook began blocking today related to election misinformation. It also blocked #StoptheSteal and a related group.