With key wins notched in a few states, Trump didn’t quite declare victory prematurely on social media as platforms had feared — but he did baselessly raise the specter of voter fraud.

“We are up BIG, but they are trying to STEAL the Election,” Trump tweeted. “We will never let them do it. Votes cannot be cast after the Polls are closed!”

We are up BIG, but they are trying to STEAL the Election. We will never let them do it. Votes cannot be cast after the Polls are closed!

Twitter took action against the tweet quickly, placing it behind a warning and adding a misinformation label. The company explained its actions in a tweet, stating that the president’s message contained a “potentially misleading claim about an election.” As of 12AM PT the result of the presidential election remained far from clear, with both candidates holding potential paths to the presidency.

We placed a warning on a Tweet from @realDonaldTrump for making a potentially misleading claim about an election. This action is in line with our Civic Integrity Policy. More here: https://t.co/k6OkjNXEAm

While Trump’s wording is left a bit ambiguous, the president’s tweet again appears to be attacking the integrity of vote-by-mail ballots. With mail-in ballots expected to come in slowly in some states, lagging votes may play a big part in the election outcome. That scenario was expected and does not raise any concerns over the integrity of vote tallying.

Due to a huge spike in mail-in voting related to the pandemic, results were expected to be more ambiguous on election night in 2020 than in past years, and so far that’s proven true. Social media companies began crafting new policies for the unusual circumstances of the 2020 election and its worrisome misinformation ecosystem in the months leading up to November.

Twitter also said in a September policy announcement that it would remove or label any tweets that incite unlawful activity and threaten a “peaceful transfer of power or orderly succession.” While tweets that Twitter restricts remain online, they’re placed behind a warning message that users must first click through in order to view their content. Restricted tweets also have their retweets, likes and comments disabled, reducing their reach.

On Facebook, where much of Trump’s Twitter content is reposted, his message earned a label reminding users that election night results and final results may differ, but the post was not otherwise restricted. In an email, Facebook spokesperson Tom Reynolds said that Facebook labeled the post shortly after it went up “in accordance with the policies we shared ahead of Election Day.” 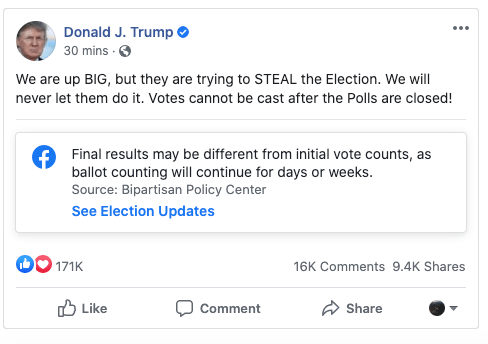 The company attached a similar label to another late-night Trump post declaring “I will be making a statement tonight. A big WIN!” Facebook previously said it planned to label any posts claiming premature victory with an informational message pointing users to official election results.

Following spoken remarks in which Trump falsely claimed that he had won the election, Facebook said it would begin running messages to users across Facebook and Instagram noting that “votes are still being counted and a winner is not projected.”