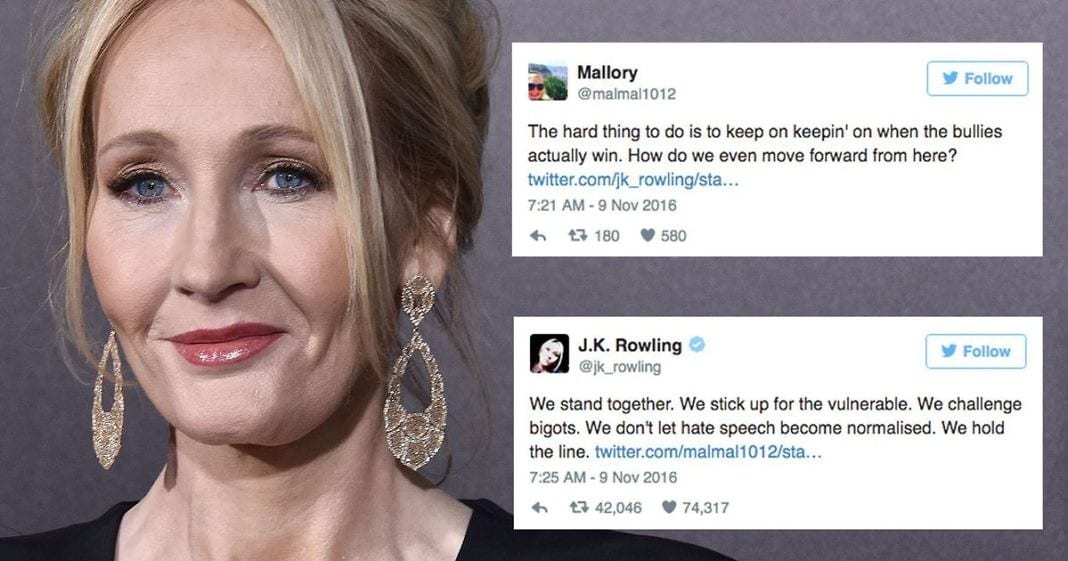 J.K. Rowling is a force to be reckoned with.
Image: Anthony Behar/Sipa USA/twitter/@jk_rowling/@malmal1012/mashable composite

LONDON 2016 is not going to go down in history as many people’s favourite year.

That doesn’t mean it hasn’t had its upsides, though.

SEE ALSO: One of J.K. Rowling’s favourite ‘Harry Potter’ moments is a line you may have forgotten

J.K. Rowling, as always, was one of them. Anyone who follows the Harry Potter author on Twitter and enjoys watching her mercilessly crush trolls with her wand-sharp wit will know why: when it comes to shut downs, epic exchanges and just generally being an awesome person, there are few who can compete.

From magical comebacks to messages of solidarity and support, here are her most heroic tweets from the past year…

1. The time she sent a hand-written spell to a fan for a lovely reason.

.@AlwaysJLover I love that you’re working to heal and protect yourself. You deserve this. I hope it helps. pic.twitter.com/T2nDG3z2MJ

2. The time she waded in on this discussion about authors “fangirling” over other authors.

I know it’s silly but I wonder if writers “fangirl” over other writers. Like does @StephenKing go “OMG it’s @se4realhinton or @jk_rowling “

@Lostnfused @StephenKing @jk_rowling not so much

3. This response to an enthusiastic fan.

@jk_rowling WHEN YOU WILL NOTICE ME???

@jk_rowling when will you notice me?

I noticed you ages ago. I was just playing it cool. https://t.co/lls8UC237O

5. This on-point summary of a businessman mansplaining history to a Professor.

Bloody Professors of Classics at Cambridge University, with their ‘facts’ and their books that they SELL for MONEY. pic.twitter.com/vovgJF5kdy

6. The time she took on Donald Trump’s former spokesperson.

Death Eaters walk among us. https://t.co/tqKq1anHpf

7. The time she took on Trump himself with this well-worded, post-debate burn.

When a man this ignorant & easy to manipulate gets within sniffing distance of the nuclear codes, it’s everyone’s business. #RestOfTheWorld https://t.co/yHBIIuhYEN

‘I’ve developed so many friends.’

If a Space Alien landed in the USA & requested: “Take me to your leader”, I wonder how Pres Trump would react vs Pres Clinton

Afraid we need to know whether the alien has breasts before we can answer. https://t.co/xHE9K5F7xt

Well, there you have it. A highly intelligent, experienced woman just debated a giant orange Twitter egg. Your move, America. #debate

11. The time she comforted worried fans in the aftermath of the US election.

The easy thing is to keep your head down & let the bullies run amok. The right thing to do is to challenge racism, misogyny and hatred. https://t.co/VF6NePPySm

The hard thing to do is to keep on keepin’ on when the bullies actually win. How do we even move forward from here? https://t.co/lTnGmXxRY4

We stand together. We stick up for the vulnerable. We challenge bigots. We don’t let hate speech become normalised. We hold the line. https://t.co/ro9AkRSc9Q

12. The time she refused to be silenced.

Not going to shut up, though. pic.twitter.com/wqehsnXzPp

13. This solid advice on how to deal with Slytherin mockers.

@jk_rowling I’m a proud Slytherin, but my friends always make fun of me because I am one. What would you recommend that I do?

14. Her words of comfort to this fan.

@jk_rowling could you please teach me how to scare the dementors that have been living under my bed? i’m tired of being sad all the time

Of course. Being anxious isn’t who you are, it’s something you’re feeling. It will pass. #GryffindorStrong https://t.co/yooTw8x6xO

@jk_rowling Your book about the London private detective was one of the foulist pieces of trash I ever read!

17. This Chamillionaire-themed tweet, which may be one of her greatest ever.

@NatalieMcGarry why apologise to her. She uses her obscene wealth & lawyer droids to threaten & bully. Tell the radge to bolt.

They see me Rowlin’
They hatin’ https://t.co/dfiqou7vpD

Today’s Mother’s Day in the UK. If your mum isn’t here to treat, do something nice for yourself, because she’s part of you. Take a hug, too

19. Her unflinching response to the theory that Dumbledore had Horcruxes.

@jk_rowling Any comments to the theory that Dumbledore make Fawkes a Horcrux? 🙂 -> https://t.co/9AWPZ0feIj Seems a reasonable theory 😉

The idea that anybody believes this is strangely upsetting to me. https://t.co/G4RlSB9kEI

@jonkerlin @jk_rowling
J! Yes, i totally watched it, and it is odd that she doesn’t say yes or no, merely that it upsets her. Which means ?

@jk_rowling But.. This theory does makes sense at many points.. Right?

Not if you’ve read and understood the books. https://t.co/MRrrNolp8Q

20. The time she ended an ongoing argument with a Scottish politician in truly no-nonsense fashion.

.@NatalieMcGarry You don’t appear to understand how Twitter or defamation works. I’m going to help you out with the latter.

21. Her curt response to the people criticising the Cursed Child casting choice of Noma Dumezweni as Hermione.

@jk_rowling it is not about racism. It is just about consistency of the movie. How come you cannot find even a good white actress

22. The time she staunchly defended Hufflepuff.

@jk_rowling Are Wampus equivalent of Hogwart’s Hufflepuff.If yes,let me cry in a corner.

There is no equivalence between Hogwarts and Ilvermorny houses, but don’t diss Hufflepuff! https://t.co/ey0VdC542f

Top 10 Times Rowling Tweeted That She Doesn’t Have 10 Rules For Success So Ignore This Nonsense & Do It Your Own Way https://t.co/Cwi6oYl79A

24. The time she shut down former Congressman Joe Walsh.

If women are so outraged by Trump’s dirty talk, then who the hell bought the 80 million copies of “Fifty Shades Of Grey?”

Joe’s tastes are very singular. He likes to anger millions of women with a single tweet. https://t.co/SLWW9jsdvK

25. This brilliant response to an article about female orgasms.

Scientists are pondering an evolutionary mystery: The female orgasm https://t.co/9sg9rqLTbj

Yes, the prospect of pushing an 8 pound object out of your vagina should be more than enough incentive for sex. https://t.co/UoEtPH3lRh

26. And this resounding reply to a Daily Mail headline.

If the worst they can say about you is you’re an OPENLY GAY EX-OLYMPIC FENCER TOP JUDGE, you’ve basically won life. pic.twitter.com/j8tUTjODuP

If we all hit ctrl-alt-del simultaneously and pray, perhaps we can force 2016 to reboot.

No matter what 2017 throws at us, here’s hoping J.K. Rowling’s Twitter feed stays the same.

BONUS: Unlocking a chamber of secrets about the ‘Harry Potter’ movies 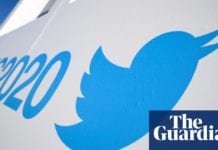 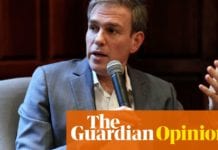