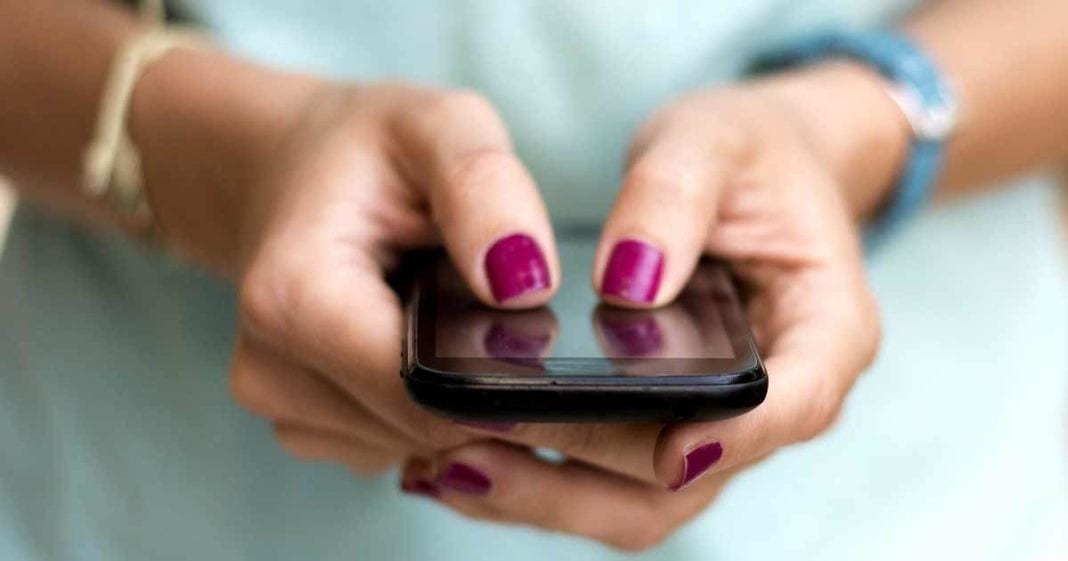 Given all the hate you can see on Twitter at any given moment, you’d think you could do anything short of creating @DailyRacialSlur and remain unbanned. But occasionally, Twitter does enact some justice. It’s just that their form of justice happens to be utterly baffling. Take the time …

In 2015, it became a running joke in the furry community to flirt with the Tony the Tiger account on Twitter because, well, look at the guy. He’s strong, committed to living a healthy lifestyle, good with kids, is presumably rolling in Frosted Flakes money … hell, we’d hook up with him too, under the right circumstances.

Designer Pasta Means Rich People Have Run Out Of Ideas

But because this is the internet, there’s no joke that can’t be taken too far. Tweets soon went from “I need more of daddy Tiger in my life” to blunt comments like “Send dick pics” and “Do the same thing in my mouth but not with milk please” (you can figure out the context there for yourself). The poor intern running @realtonytiger, understandably not wanting the mentions of a family friendly cereal mascot to overflow with hardcore animal erotica, began blocking furries. This led to the official Chester Cheetah account opening Cheeto-dusted arms to anyone looking for a new beau, because modern capitalism is much stupider than anyone could have ever predicted.

Boivin wasn’t even part of the furry onslaught — he simply saw a promoted Tweet pop up in his feed and decided that he wanted to f- … mess with the advertisement. Meanwhile, people who said things like “I want you to pour that milk all over my cereal and then let me nut while I watch you eat it” went unpunished — although maybe punishment is what they wanted, so perhaps that’s for the best.

Boivin pointed out what’s going to be a running trend in this piece: While he was banned for making what was far from the filthiest sex joke at the expense of a corporate mascot, countless other people were allowed to continue screaming about the need to commit genocide in America without so much as a slap on the wrist. Maybe we need to get them to sexually harass Tony the Tiger? That … that can’t be the solution, right?

An Irishman Was Suspended For Tweeting “Cracker”

In Ireland, saying “That’s a cracker!” means “That’s great.” We guess that it also literally means “That is a cracker” in food-based contexts. But in America, for the benefit of our Irish readers, “cracker” is a “derogatory” term for white people, in particular poor white people. And Twitter’s inability to parse context led to the suspension of Irishman Danny Morrison for a period of 24 hours that were probably pretty confusing to him.

Someone had tweeted two pictures of Adele at Morrison for reasons that Irish journalists were woefully inadequate in failing to establish, and Morrison responded to one with “That’s a cracker,” presumably because he’s an Adele fan. This earned him a ban and a flummoxed Irish news article. 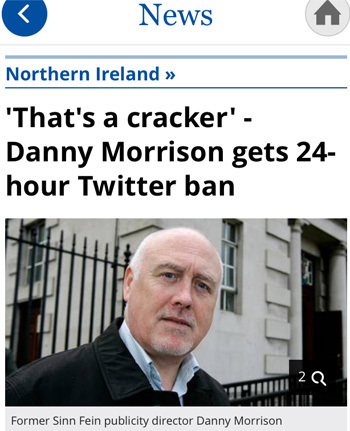 The Belfast Telegraph
It … was a slow news day in Ireland.

It’s not clear who reported Morrison, but the whole dumb affair would be like if you logged onto foreign social media and told someone to “eat my shorts,” only to be suspended because they thought it was a serious threat. At least Twitter has a strict no-nonsense policy toward slurs when they happen to be attached to pictures of Adele. Otherwise, go nuts.

When 85-year-old Nobel Peace Prize winner Desmond Tutu signed up for Twitter, it seemed like it should have been a marketing coup for the platform. Who wouldn’t want to follow the deep thoughts and what we could only assume were the dankest of memes from a man who helped end Apartheid? Within a few hours, he had racked up hundreds of followers, sent out a couple of cute tweets, and then, uh, found himself suspended.

Oh no, was this like when your grandpa tried to use Twitter and followed everyone he saw before accidentally retweeting a dozen Wendy’s ads? Indeed, an out-of-control Tutu, drunk on social media power, followed, wait for it, 30 whole people before being suspended. It’s a wonder they didn’t make him spend a week at social media etiquette camp before allowing him back. 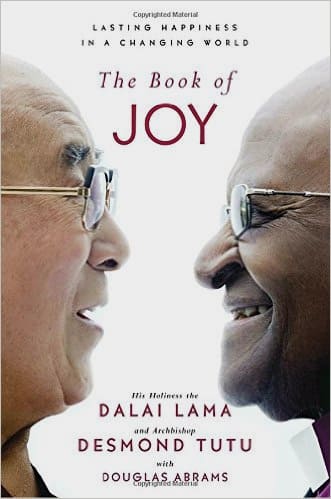 Avery
“Plus, he keeps trying to plug the book he wrote with some spammer with 14 identities.”

Twitter reversed the suspension a few hours later and apologized, claiming the retired archbishop had accidentally been caught in a spam bot clean-up (presumably targeted at bots that were trying to sell cheap ballet outfits). But Tutu now only Tweets sporadically and follows nearly no one, like a lonely social media ronin. We hope you’re happy, Twitter. By mishandling the account of a legendary human rights activist, you’ve prevented countless good people from ever having Desmond Tutu like their stale copy of a joke that someone else told a year and a half ago.

WeRateDogs is an account that rates dogs. Spoiler alert: Every dog is a good dog. It’s not a complicated system. 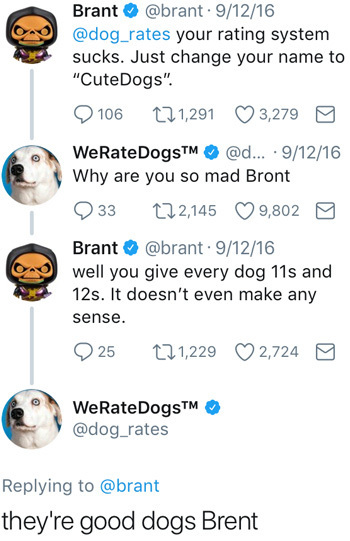 It’s an adorable oasis in Twitter’s ever-churning sea of rage. So naturally, Twitter once took it down for a very stupid reason.

Someone decided that they wanted the popularity of WeRateDogs, but didn’t want to have to go through all the troublesome effort of actually thinking up a compelling, wholesome idea, because that’s, like, work and stuff. So they just started stealing WeRateDogs’ Tweets and putting them on Instagram. Then they filed a report on Twitter accusing WeRateDogs of impersonation, and amazingly, Twitter said, “Yup, that checks out” and killed the account. It’s nice to know that one of the largest social media platforms on the planet has all the investigative skills of the detectives in shitty horror movies about identity theft.

Apparently, in addition to not recognizing a popular account on their own site (180k followers at the time), mods didn’t think to take five seconds to check which account’s posts came first before siding against their own user. Luckily, the thief was also kind enough to email the owner of WeRateDogs to explain what they were doing and why, because it turns out that when your career plan is to steal a social media account about dogs, you might not be the criminal mastermind you dreamed you were. WeRateDogs was eventually restored, and everyone was able to get back to good dogs.

A good way to judge any sort of authority is by looking at how open they are to being parodied. So let’s look at how Twitter handled @TrustySupport, which mocked the platform’s inability to handle harassment by masquerading as a useless Twitter customer support account.

To give you a sense of their tone, @TrusySupport once tweeted, “We’ve heard Black Users are often threatened & harassed on @Twitter. So @jack made these emojis [of black hands]. Problem solved! #BlackHistoryMonth #BHM.” Critical, but not exactly profanity-riddled tirades. 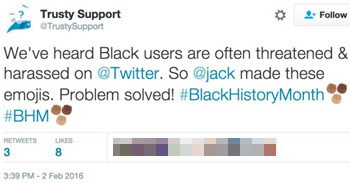 As you can see from the retweets and likes, it lit the internet on fire.

They first ran afoul of Twitter’s parody policy, so they had to explicitly call themselves a parody and remove some trademarked images. Other, nastier accounts were getting away with using trademarks, but whatever, that’s reasonable — Twitter didn’t want people mistaking them for a real support account, but they were fine with being lampooned as long as it was obvious. Cool, right?

But then Twitter suspended them again anyway, claiming they felt the word “support” might confuse people. You know, maybe it’d make them think it was an official customer service account for … Trusty. Because words need their own customer service, so people can check to make sure they’re using them properly. They did eventually reverse the suspension, but @TrustySupport is now gone, presumably because they got sick of dealing with Twitter. One could even say they were … annoyed off the platform.

The weird part is that this wasn’t someone at Twitter rubber-stamping a suspension onto one of hundreds of accounts they had to look at. The two sides had a lengthy conversation, and had seemingly come to an agreement before Twitter changed course. Was Twitter trying to lure @TrustySupport into a false sense of security? Do they enjoy the thrill of the suspension hunt? Are they merely super inept when it comes to this sort of thing? It’s … it’s probably the last one.

Oh, and all this fuss was over an account that had 826 followers. We get that Twitter is a big company full of people with all sorts of different responsibilities, but maaaybe they have better things they should be doing. Like putting this level of thought and personal response into harassment reports? Or tweaking the look of all the buttons again, whichever.

This story is a little different, but hey, you’ve earned it. Mega pop star and bad counter Adele used to drunk-tweet, and totally got busted for it by her management, like the celebrity version of your parents catching you picking the lock on their liquor cabinet.

According to the singer of “Hello” and presumably other work that we’ve long forgotten because “Hello” has been so relentlessly drilled into our heads that the concept of other songs has become a vague abstraction, she used to Tweet while drunk, and nearly said a few things that would’ve been bad for her image. She no longer drinks, but she still isn’t allowed to Tweet directly. If she wants to, say, thank someone for being called a cracker, she has to write the text out for her team to look at and post — if they approve of it. Since it’s unlikely that a group of people dedicated entirely to making Adele look as wonderful as possible would sign off on “Taylor Swift? More like Taylor SLOW. Because she’s DUMB,” don’t expect her to be involved in any internet beef anytime soon.

But if you’re truly desperate to see some unfiltered Adele, you can try to track down the secret personal account she claims she has. Presumably it’s full of crude insults alongside the odd extended analysis of why Adele’s music is so great.

Mark has a book, and hasn’t yet been banned from Twitter.

If you loved this article and want more content like this, support our site with a visit to our Contribution Page. Or sign up for our Subscription Service for exclusive content, an ad-free experience, and more.

Subscribe to our YouTube channel, and check out If The Internet Was a High School, and watch other videos you won’t see on the site!