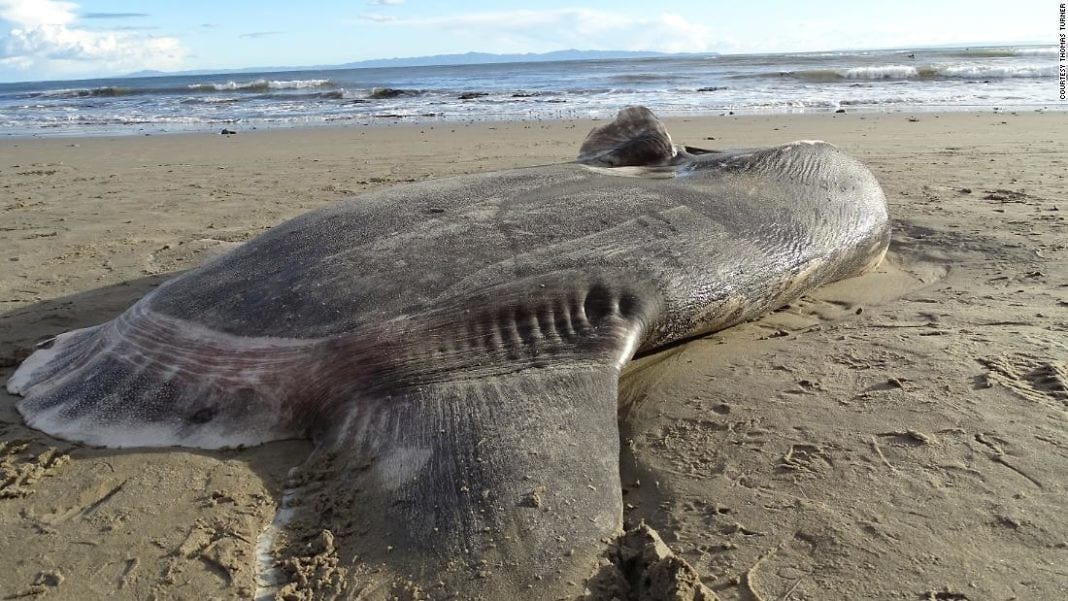 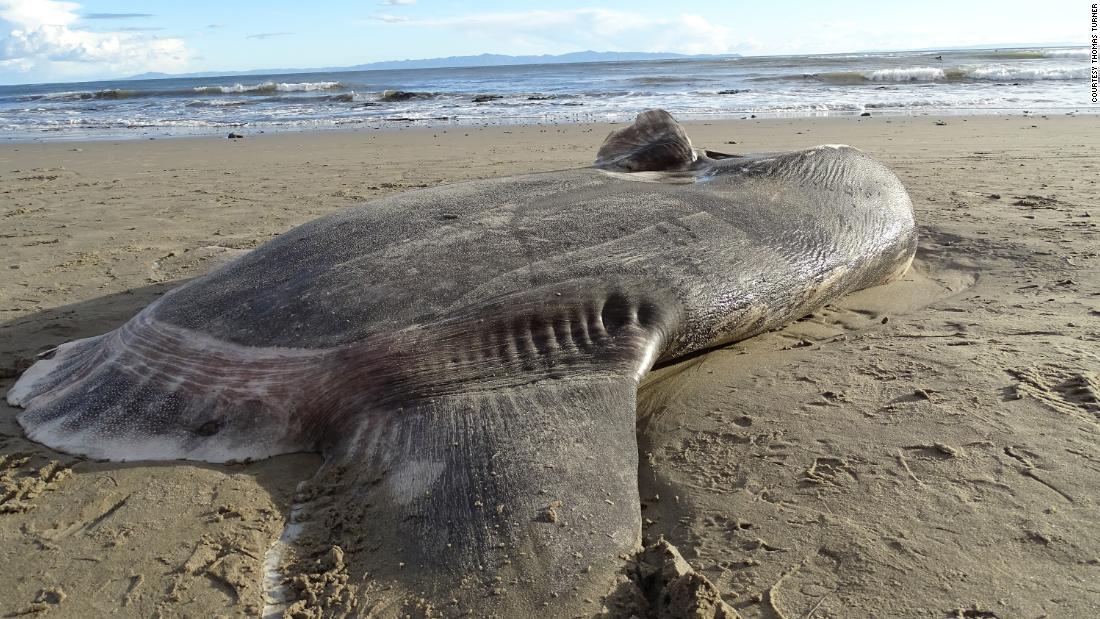 (CNN)This is the extraordinary tale of how a massive, strange-looking fish wound up on a beach on the other side of the world from where it lives.

What transpired after that surprised researchers from California to Australia and New Zealand.
It turned out to be a species never seen before in North America. It’s called the hoodwinker sunfish.
“When the clear pictures came through, I thought there was no doubt. This is totally a hoodwinker,” said Marianne Nyegaard, a marine scientist who discovered the species in 2017. “I couldn’t believe it. I nearly fell out of my chair.”

How the hoodwinker got its name 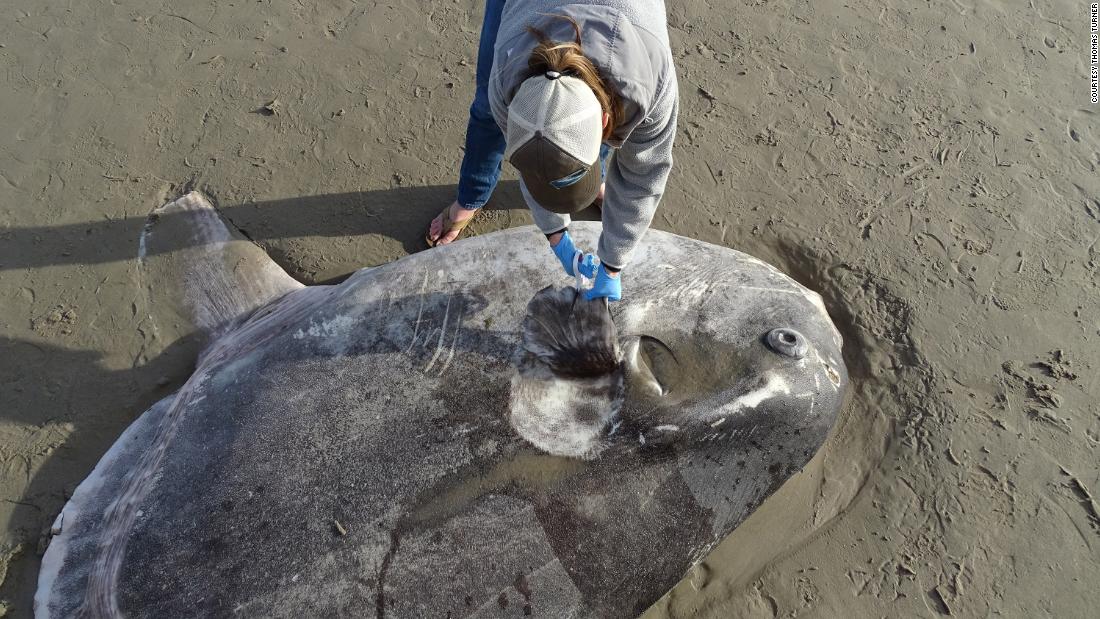 Nyegaard spent years chasing the hoodwinker sunfish before she located and named the fish. All cases of the big fish were found in Australia, New Zealand, South Africa and Chile, she said. Except for one time in the 1890s, when drawings and records documented the fish appearing in the Netherlands.
Scientists say there are five species of saltwater sunfish, and they come from different places. One enjoys tropical waters, another likes the subtropics and the hoodwinker prefers temperate water, Nyegaard told CNN. She works in the marine division at the Auckland War Memorial Museum in New Zealand.
“This is why it’s so intriguing why it has turned up in California,” she said. “We know it has the temperate distribution around here and off the coast of Chile, but then how did it cross the equator and turn up by you guys? It’s intriguing what made this fish cross the equator.”
The antics of this wayward fish are comical, especially considering how the species got its name.
As Nyegaard researched the fish, she realized some species of sunfish had been misidentified. One species that was thought to be rare was very common, while another fish thought to be common was misidentified, she said.
“It had gone unnoticed because no one really realized it looked different. There’s a long history of confusion about the species in the sunfish family,” Nyegaard said. “This fish had managed to stay out of sight and out of everybody’s attention. It had been taken for mola mola (an ocean sunfish) so it was hoodwinking us all.”
And a bit of hoodwinking is what it was doing to researchers in California, too.

Scientists first thought it was a different type of sunfish 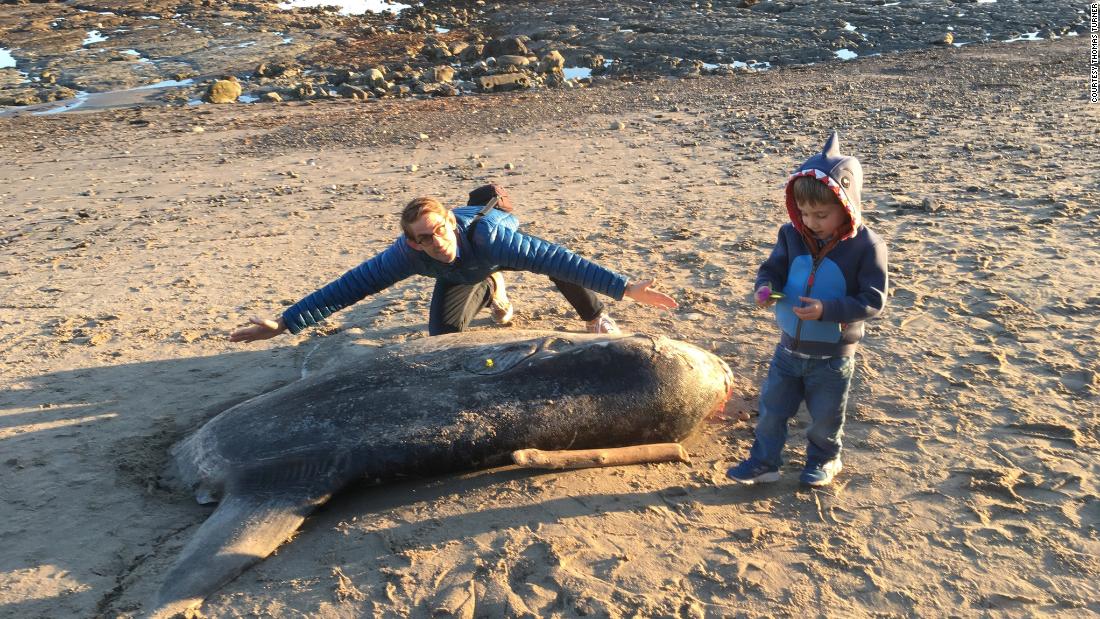 An intern at Coal Oil Point Reserve alerted conservation specialist Jessica Nielsen to the dead beached sunfish on February 19. When Nielsen first saw it, the unusual features of the fish caught her eye.
“This is certainly the most remarkable organism I have seen wash up on the beach in my four years at the reserve,” Nielsen said in a UC Santa Barbara press release.
She posted some photos of the fish on the reserve’s Facebook page. When colleague Thomas Turner saw the photos later that day, he rushed to the beach with his wife and young son.
Turner, an evolutionary biologist who is six feet tall, stretched out his arms to show the scale of the seven-foot-long fish. He snapped some photos of what he thought was an ocean sunfish, a rare sight up-close, he said.
“It’s the most unusual fish you’ve ever seen,” said the UC Santa Barbara associate professor. “It has no tail. All of its teeth are fused, so it doesn’t have any teeth. It’s just got this big round opening for a mouth.” 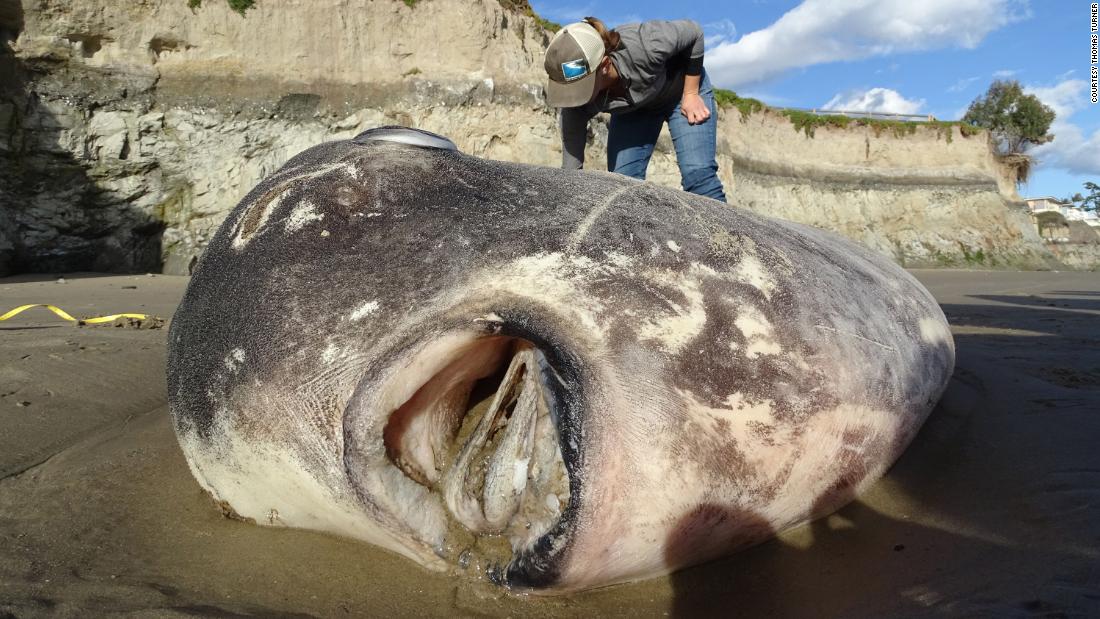 Turner posted his photos on iNaturalist, a site where people post photos and sightings of plants and animals.
A fish biologist commented and alerted Ralph Foster, a fish scientist and the fish curator at the South Australian Museum. It was Foster who first said this may be a hoodwinker sunfish and not an ocean sunfish in the comments on iNaturalist.
Turner was stunned, he said. “To discover that it may be the first record in all of the Americas and only the second Northern Hemisphere record for the species, then I got very excited,” he said.
Foster excitedly emailed Nyegaard, the woman who discovered the species, and told her what he was thinking.
“He sent me an email with links and said, do you reckon this is a hoodwinker?” Nyegaard said. “But the pictures weren’t very clear. I was reluctant to settle on an identification because it was so far out of range.”
Nyegaard and Foster asked to see more photos so they could make a more educated call.

Soon they confirmed its true identity

It had been two days since Nielsen had first seen the fish. When Turner and Nielsen went back to the beach, the creature was no longer there.
They started two miles apart from each other on the beach and kept looking, walking toward each other until they found the missing fish. It had refloated on the tide and washed up a few hundred yards away, Turner said.
The pair looked for physical markers that are common in the hoodwinker sunfish.
Where a fish normally has a tail, the hoodwinker only has a clavus — a structure that looks like a rudder, Nyegaard said. All sunfish have a clavus, but the hoodwinker’s has a shape that’s distinctive. 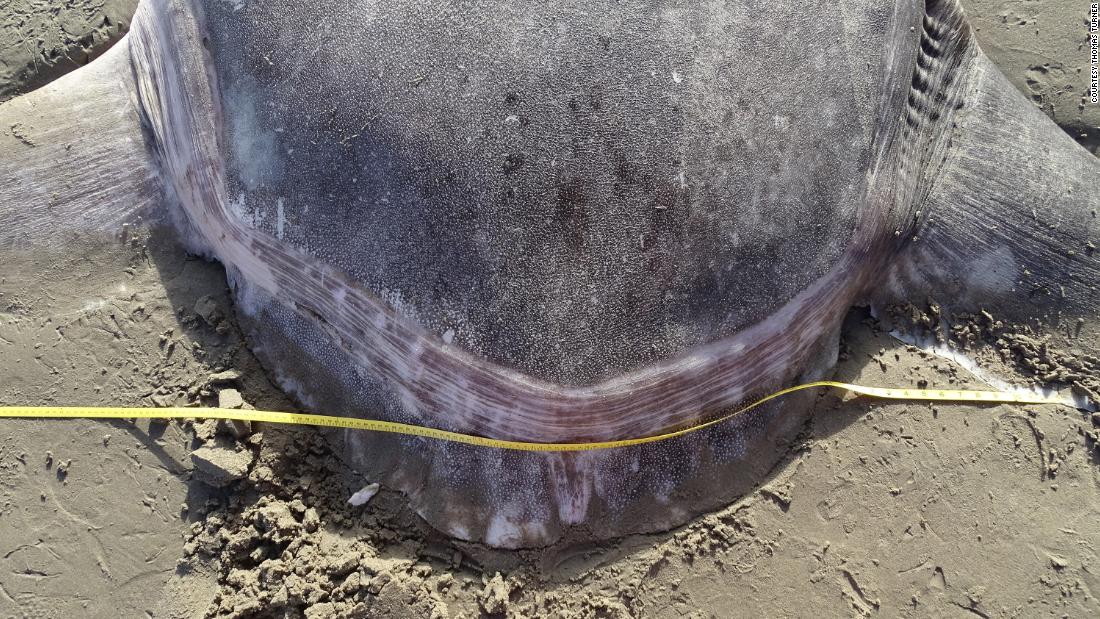 It’s scale structure and the number of boney structures also are different from other species, she said.
All of the features in the photos matched up with the hoodwinker. When Nyegaard saw the photos, she knew she had a hoodwinker case on her hands.

But how did it get there?

No one is sure whether this lonely fish wandered far from home on its own or is part of a population of hoodwinkers in North America that’s yet to be discovered.
Nyegaard said she wants to compare a genetic sample of the hoodwinker found in California with her samples of the fish from Australia and her region.
“It’s not uncommon for sunfish to wander really far,” Nyegaard said. “In the future, we will understand whether this fish occurs regularly off the coast of California or whether this is a one-off. 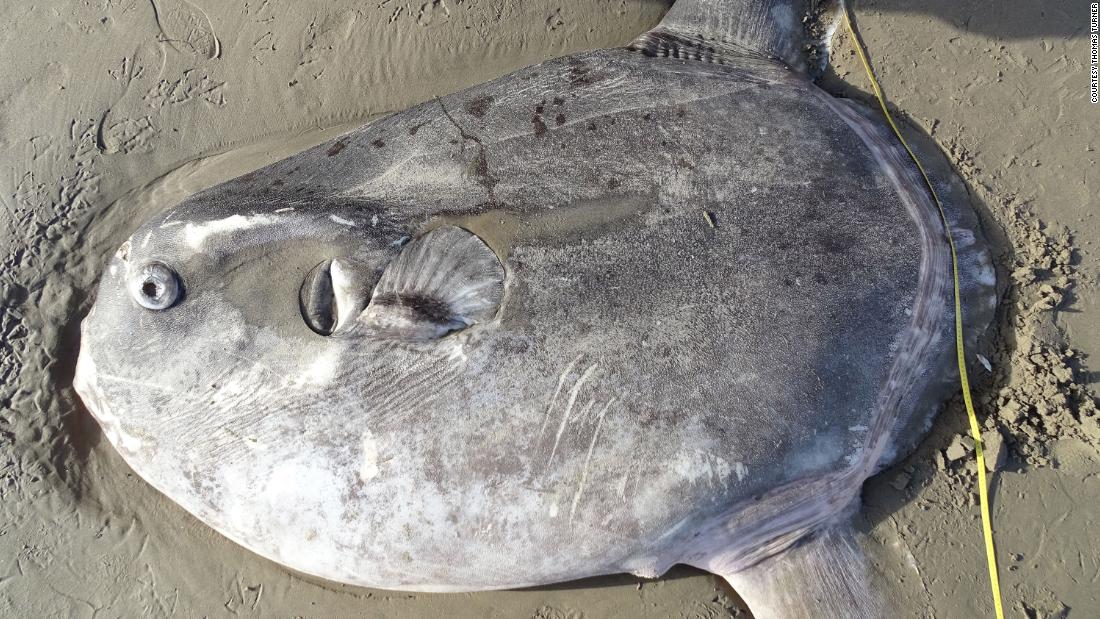 Both Nyegaard and Turner marveled at how social media and the iNaturalist site can help bring researchers closer to an answer.
“iNaturalist is brilliant because we can log the sightings and learn more about (the fish’s) distribution,” Nyegaard said. “We are living in a changing world and it’s important for scientists to get input from everybody in what they see because we can’t be out in the field every day all over the world.”
Turner said it was exciting for him to help identify the first recorded sighting of a hoodwinker sunfish in North America — and only the second in the Northern Hemisphere.
“I’m a professor, I’m a biologist but I didn’t actually know what was special about this fish,” Turner said. “I just posted a picture and that connected me with the world’s expert and the discoverer of the species.”

Melania Trump’s Anti-Cyberbullying Tweet Does Not Go Over Well