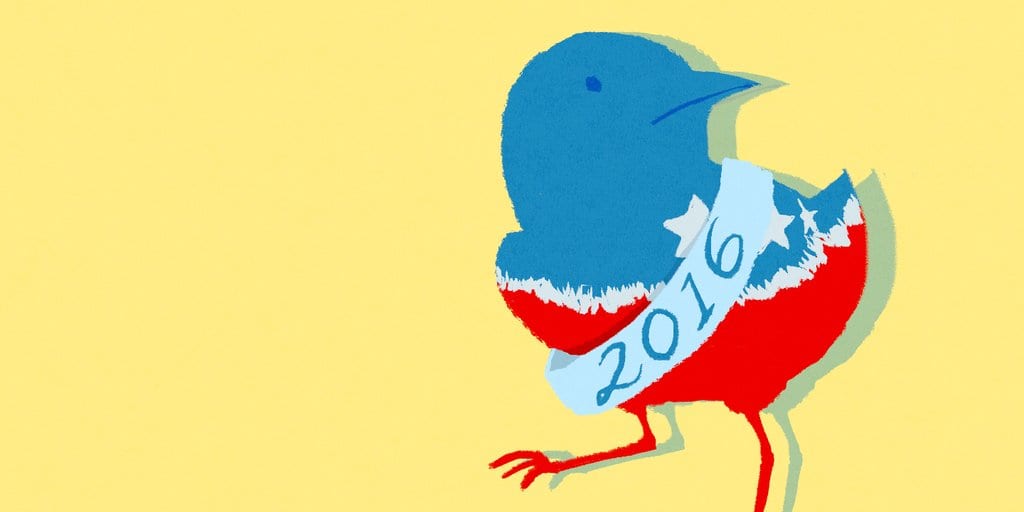 As the voters of Iowa prepare to be ignored again until 2020, its hard to fathom that the 2016 primary process has really just begun.

After a victory by the perennially despised Republican Sen. Ted Cruz and a virtual tie between Democratic powerhouse Hillary Clinton and self-avowed socialist Bernie Sanders at the Iowa caucuses this week, Twitter quickly filled up with conspiracy theories, accusations of fraud, and guffaws of disbelief at how some Iowa precincts decided a tie.

In 2015, Twitter became much more than a bullhorn for the reactionary masses. The social network, which has long defined the narratives of our culture while struggling to grow its user base to compete with archrival Facebook, once again defined itself as the preeminent location to connect everyday people with those who grab headlines. But 2015 also proved a year of expansion to this effectpresidential candidates have not only used Twitter to connect with voters in the tired way a brand might, its now become a new battlefield of the campaign.

Far from the focus-grouped sloganeering that typically defines political outreach online, candidates often faced off against one another on Twitter in ways that came to define the innumerable news cycles between last summer and now.

The campaigns of Jeb Bush and Hillary Clinton threw jabs at each other on education policy over Twitter, sending back-and-forth statistics and mockery as if they were on a debate stage.

Over the holidays, now-former GOP candidate Sen. Rand Paul used Twitter to throw out witty retorts and one-liners about his opponents in an epic rant with the hashtag #Festivus, effectively spitballing ways to gain his own traction.

After the debates, @realDonaldTrump always trying to give us parting gifts of his made in China ties. Weird. #Festivus

Ted Cruz and Donald Trump have continually exchanged blows at each others accounts, essentially extending the debate without the need for a major news sponsor. And after Trumps second-place finish in Iowa, he aired his displeasure not on CNN or one of the other major news networks, but on Twitter.

The State of Iowa should disqualify Ted Cruz from the most recent election on the basis that he cheated- a total fraud!

Twitters importance to the new politics even spread past the presidential campaign, with President Barack Obama taking to the social media site to take critics to task over issues like gun control and the Confederate flag.

Guns now kill as many people as cars in almost half of the U.S. We can’t stop every act of violence, but we can save lives if we act.

As the site grows ever more valuable to the culture, however, it grows less valuable in the eyes of investors. This month saw the company hitting an all-time low stock price since its 2013 IPO and the company began 2016 with a massive corporate shakeup as four high-level executives decided to leave the company.

Presidential candidates have not only used Twitter to connect with voters in the tired way a brand might, its now become a new battlefield of the campaign.

With over 300 million users, Twitter could hardly be described as weak. But in order to prove growth, the company has been forced to make changessome minor but others majorto the service in hopes of helping new users break the sometimes dense world of inside jokes, lingo, and groupthink that can run the culture of the site. Small ones, like changing Favorites to Likes and promoting popular tweets on the sites front page, are adaptations of window dressing. Others, such as the much-rumored 10,000 character increase to its famed 140 limit, stand to completely change the way people use the site and functionally turn it into a Facebook clone.

The problems of making any changes to the site are evident by the growing use of the service by presidential candidates. The short, often pithy rhetorical skirmishes these candidates embrace are core to what makes the site function for even basic users and directly connects voters with their leaders and each other. For better or worse, Twitter can be the ultimate campaign bumper sticker.

A positive example is #FeelTheBern, a jokey hashtag that quickly came to define the shocking and meteoric ascent of Sanders campaign. Considered little more than a gadfly before he ran for president, the Vermont senator has quickly picked up Ron Pauls 2012 mantle as President of the Internet and attracted voters across social media. In fact, one could question whether his overwhelming appeal to younger voters is due to his traction on social media or vice versa. During this weeks Iowa caucuses, Sanders superceded Clinton in Twitter mentions and his supporters took to the site to express outrage over six Iowa precincts that may have swung the state for the former Secretary of State over coin tosses.

As the 2016 campaign marches on, one can be certain that spats and arguments between candidates will not remain on the debate stage.

At the other end of the spectrum is Donald Trump. So prominent a Twitter user is Trump, the New York Times has amassed an impressive and comprehensive list of every insult the billionaire has hurled on the site. His targets actively range from opponents like Jeb Bush and Hillary Clinton to the obscure, such as wireless carrier T-Mobile and the Neil Young song Rockin In The Free World. More telling than what Trump tweets on Twitter, however, is what he retweets. The candidate raised eyebrows last November when he retweeted a racist (and false) statistic about black-on-white crime. More recently, Trump retweeted a joke from @WhiteGenocideTM, a noted neo-Nazi account that once showed The Donald gassing Bernie Sanders (who is Jewish).

In fact, a recent analysis found an astonishing 62 percent of the authors of tweets Trump deemed deserving of promotion are white supremacists or white nationalists. In the same way Twitter is connecting other candidates to their supporters, it is also revealing in clear view and plain dialogue Trumps transparent race-baiting and the connection between his rise in the polls and a newly resurgent far right. In December, Buzzfeeds Rosie Gray reported on the rise of #AltRight, a growing white nationalist movement that largely sees Trump as the Great White Hope.

How Twitter could grow this interest as a company is hard to sayits difficult to imagine who the company could yet lure that hasnt already been attracted by the interconnected world of celebrity, politics, and personality that dominates the site. From the inside, it can often begin to feel like Twitter is the culture, and that becomes a self-fulfilling prophecy. The heavy presence of journalists and other media types on the site means what happens there wields impressive influence on other forms of media. Twitter is where narratives about celebrities, candidates, and events are cemented by those who would broadcast or write about them, meaning even those that dont use the site are impacted by it.

What is certain, however, is Twitter will continue to define our culture and especially our politics. As the 2016 campaign marches on, one can be certain that spats and arguments between candidates will not remain on the debate stage (especially if Trump continues to perform below expectations). This presidential cycle is making clear the value Twitter has as a method of connecting candidates and voters. Its personal nature creates a perpetual town hall, in which a candidate can shine or crash at any moment. Regardless of whether Twitter can translate that into dollars, the rest of us will reap the rewardsand pay the price.

Ben Branstetter is a social commentator with a focus on the intersection of technology, security, and politics. His work has appeared in the Washington Post, Business Insider, Salon, the Week, and xoJane. He attended Pennsylvania State University. Follow him on Twitter@BenBranstetter.