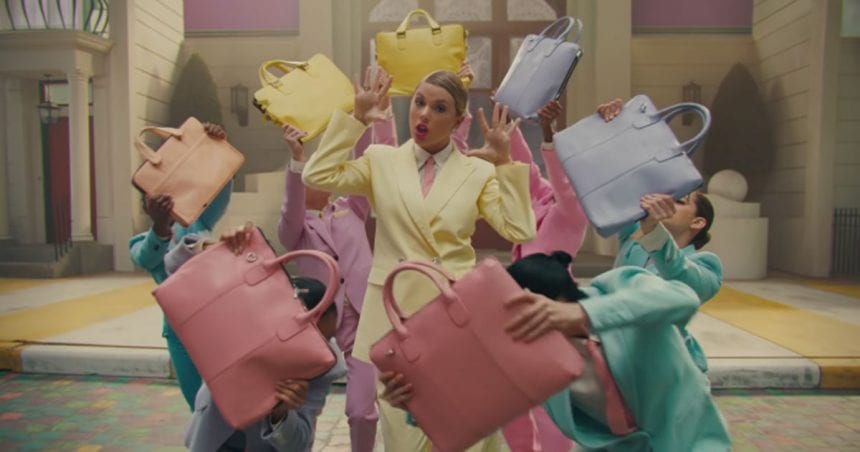 Taylor Swift is having her ME! moment!

Depending on where you are on the globe, the pop star dropped her new single and music video featuring Panic! at the Disco‘s Brendon Urie on Thursday night/early Friday morning, both of which she had been teasing for… wait for it… 13 days now!

Taylor doesn’t do anything on accident, which is why Swifties were on the hunt for easter eggs in her new clip ever since it dropped! Of course, the 29-year-old confirmed during her YouTube live chat that there were many to be found:

“Okay regarding Easter Eggs. There are a lot of them in this video. Some you’ll find out right away and some will take a minute to reveal their meaning (omg why am I talking like a sorcerer).”

Well, let’s break ’em down for you!

The end of the snake era?

From SNAKE turns into a BUTTERFLY! One of my favorite part of the music video! @taylornation13 @taylorswift13 #TaylorSwiftTONIGHT #MEmusicvideo pic.twitter.com/rM8ZeiOhEn

Swift’s video opens up with a scene of a pink snake slithering along pastel-colored cobblestone looking ready to attack before poof, it turns into dozens of beautiful butterflies.

We can only imagine this is the starlet hinting at her metamorphosis from the “snake” — which she was seemingly dubbed as by Kim Kardashian West — of her Reputation era to this new one all about loving yourself and what makes you different!

SO I GUESS THE NEW TAYLOR CAME TO THE PHONE??? @taylorswift13 @taylornation13 #TaylorSwiftTONIGHT #meoutnow pic.twitter.com/gc1AWW70bk

Another reference to her Reputation past, the songstress included a similar phone to the one in the Look What You Made Me Do video when she sings:

The new Taylor is here!

look what you made me do… with this staircase

All the monsters (snakes) turned out to be just trees (cloud snakes)#MeOutNow @taylorswift13 @taylornation13 pic.twitter.com/ynEoqJ1fFI

If the stairs from that phone scene are looking familiar, it’s because it should! They seem to be the identical set Taylor sat at the top of in the Look What You Made Me Do video, but instead of snakes crawling up to her, she has them in the shape of clouds following after her.

This time, she just brushes them off!

The Dixie Chicks Are Cool chicks

Behind Brendon during the argument scene is a gallery wall of paintings of chicks, including the Dixie Chicks!

Possibly hinting at a collab on Swift’s upcoming album, the trio addressed it on Twitter with these emojis:

And Taylor even responded, writing:

is the next track going to be called “Lover”? #TaylorSwiftTONIGHT pic.twitter.com/XuCYA7rjoV

Many fans are speculating the next single off the pop star’s album will be titled Lover due to this scene (above)!

Why else would it be in bright lights??

Also during Taylor’s YT live chat, she wrote to followers:

“Oh and there’s a secret in the video I’ve been keeping in for months – let’s see who can guess it.”

With Brendon handing the singer an adorable kitty during one scene, many feel the secret is that she now has THREE cats!

Olivia and Meredith were both featured in an earlier scene, so it would only make sense that if there is a new addition, she would be in the video as well!

On the track, Swift stops and says:

And we can only hope it’s a nod to her first MySpace picture of her wearing her Garland Elementary Spelling Bee Champion tee!

Of course, there’s going to be way more eggs to find, but you can see just how Twitter is taking to her comeback (below)!

Where did Taylor Swift get this pic of me from Thanksgiving pic.twitter.com/96JsbZvwY8

That's it… ME! is my new anthem @taylorswift13 pic.twitter.com/i1Q9XST1z4

And can we just mention Taylor is COMING for North West‘s aesthetic?!!

Tell us YOUR thoughts on it all (below)!