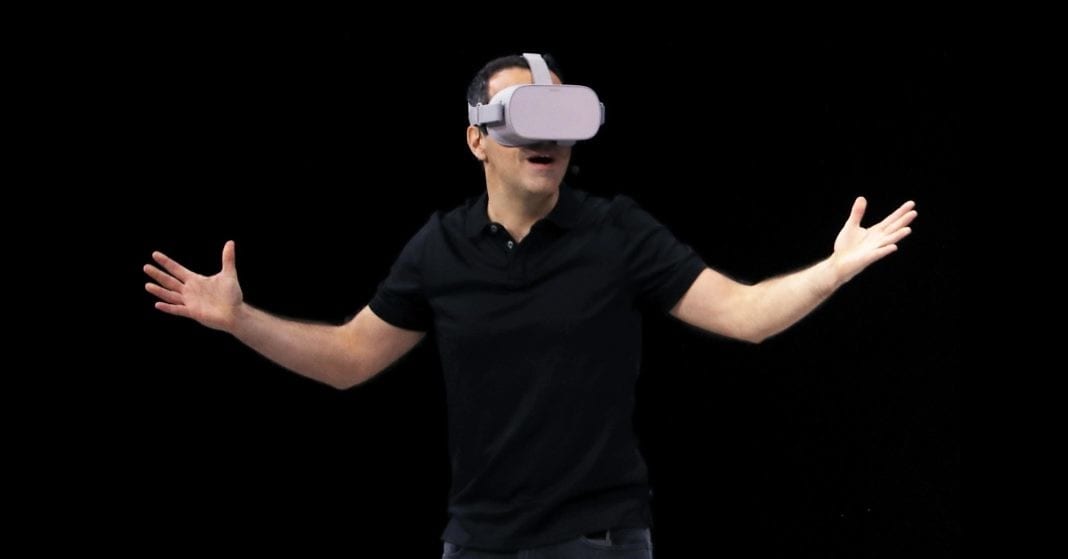 Facebook really, really wants you to give VR a go—no pun intended. That's the message the company communicated yesterday during day one of F8, its annual developers conference in San Jose, California. The F8 keynote was filled with assurances that VR headsets like the new Oculus Go won't create a barrier between you and the people around you. Instead, the company believes that wearing a face computer will be even more social, because you'll be playing games, taking meetings, and video chatting with friends and family.

And since the apps that have already been created for Samsung's Oculus-based Gear headset can be ported over to the Oculus Go headset, there are already more than a thousand apps available for the new $200 Oculus Go. What else do you need at this point in order to embrace VR?

For one, maybe a little reassurance that VR apps—as well as AR apps—are being designed with user privacy and reasonable data-sharing practices in mind. Facebook still needs to prove that it's thinking about new technologies in a way that ensures they won't become the next obvious frontier for abuse, misinformation, or even election interference. As the company's primary platform has swelled to more than two billion users, it's had its share of issues with false news, hate speech, and bad apps, due in part to Facebook's own lack of due diligence during growth phases.

Facebook's Oculus VR user base is still minuscule by comparison—according to one research firm, 1.8 million Oculus Go devices are expected to sell this year—but if Go becomes the great VR democratizer that Facebook is hoping it will be, then the new headset is introducing a new kind of app and a new kind of app store to a whole new subset of Facebook users. It also raises the question of how Facebook will deal with "fakeness" in an environment that is, by definition, entirely virtual.

Facebook's executives in VR and AR say they have learned some lessons from the early days of Facebook, and that the company is trying to "ensure a very high quality of platform against misinformation or against bad actors," according to AR/VR executive Andrew Bosworth. But Bosworth, known as "Boz," also said in an interview with WIRED that he believes Facebook's AR and VR app platforms are still too nascent to have serious abuse problems.

Facebook-owned Oculus utilizes its own app platform, separate from Facebook, Messenger, or the other apps that Facebook owns. You don't need a Facebook account to sign up for Oculus, and linking your Oculus account to your Facebook account is optional, as WIRED's Peter Rubin points out in his review of the headset. Go has its own app store, and many of the mobile VR apps that are front and center right now are highly recognizable brands or titles: Netflix, Hulu, NatGeo, Minecraft, The Last Jedi.

There are also only around a thousand apps right now, which means each app is reviewed manually, according to Bosworth. "It's a manageable number of applications," he says, "and you can just look at every one of them and make sure there's nothing in there that's untoward."

In a pre-emptive move, ahead of changes that could be enforced when Europe's General Data Protection Regulation goes into effect, Oculus published an update to its privacy policies two weeks ago. The update highlighted the addition of a privacy control center for users and clarified the kinds of information Oculus, and in some cases Facebook, collects about Oculus users. It also divulged the kinds of data that Oculus app-makers have access to: the real-time position of your headset and controllers, your Friend List, and the boundaries of the physical space where you're using Oculus. "We periodically audit our systems to determine if there's evidence of nefarious activity," the post reads, "and we take action accordingly."

In other words: it doesn't read all that different from Facebook's privacy policies and settings on its core app or other apps. Especially when you consider the periodic audits; Facebook's own privacy audit in 2017 didn't catch the Cambridge Analytica data caper. As VR gets more sophisticated, and as standalone VR headsets get better at profile-building and advanced positional tracking (like the kind promised with Oculus's "Santa Cruz" headset), it's enough to make any non-early-adopter wary about the volume and granularity of data that's being collected.

But Bosworth insists it "couldn't be a better time, in terms of the public conversation, to build new platforms, because you can benefit from having observed all of the issues that can come as your platform grows and succeeds." He cites examples of tools in Oculus that "allow people to either express or not express their identity as they see fit," such as using a realistic avatar when using Facebook Spaces with friends, but exercising the option to be more opaque about who you are if you're playing games against strangers.

A spokesperson for Oculus also said that the company has been working on an Abuse and Prevention API that's being tested by a few app developers right now, and that will become more widely available later this year.

Still, Bosworth acknowledges there's more work to be done in terms of the kind of privacy and safety tools that need to be offered, both to consumers and to developers in VR. Right now, the Oculus platform is still primarily experienced through the apps being built for mobile platforms, along with some PC apps for the Oculus Rift. That's going to change if standalone VR really does take off. "As we go forward, I think there's a much richer set of tools that we can provide to app developers," Bosworth says, "so that within apps, there's an additional layer of safety and security."