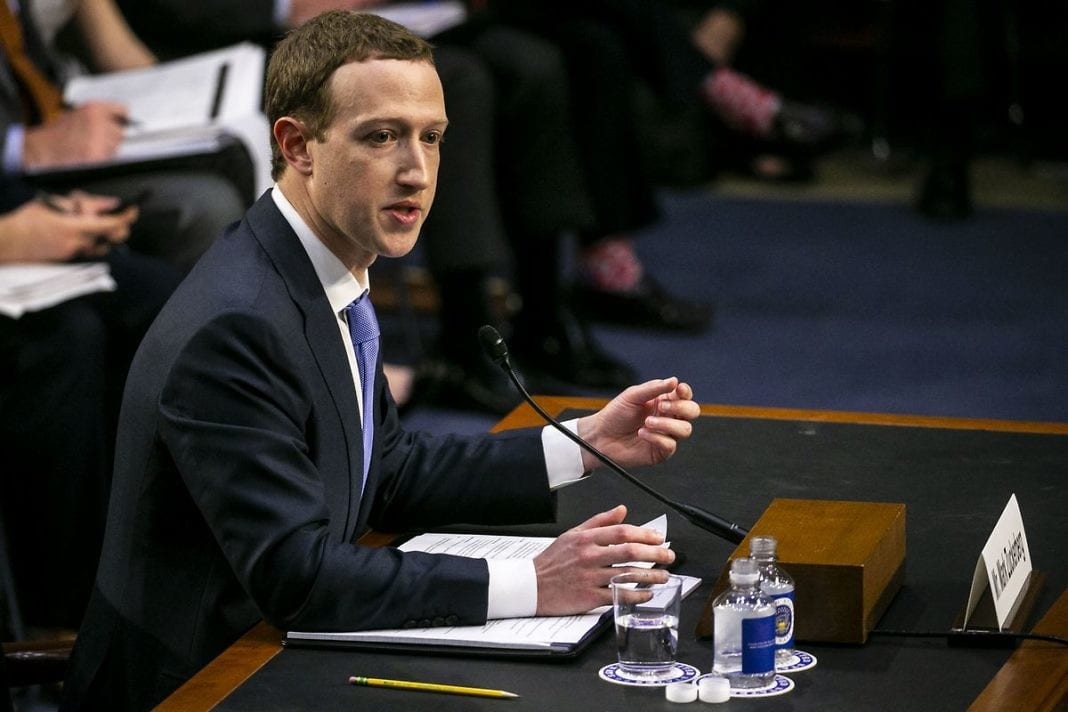 Facebook Inc. Chief Executive Officer Mark Zuckerberg apologized, defended his company, and jousted with questioners while agreeing with others during his first-ever congressional testimony. Early reviews on his effort to restore trust with lawmakers and the public were mostly positive.

“It was my mistake, and I’m sorry,” Zuckerberg said Tuesday, turning to look at individual lawmakers on the dais at a joint U.S. Senate committee hearing. The 33-year-old CEO looked occasionally uncomfortable, and dodged some questions including one about whether European consumer privacy laws should be enacted in the U.S. He also responded clearly to most queries and even got a few laughs, but not all lawmakers were convinced.

Before the appearance ended, public speaking and crisis-communication experts gave Zuckerberg high marks for his statements and delivery. Based on past public appearances under scrutiny, expectations were low. Facebook shares jumped more than 5 percent to the highest level in more than two weeks.

“It’s obvious he prepared for his testimony,” said Allison Shapira, who leads Global Public Speaking LLC, a communication-training firm. “You can hear it in the way he’s answering the questions and how he looked. He had a strong, confident voice. He had calm pacing. He was not rushing. If he did not look nervous at all, we might doubt his sincerity and authenticity.”

Zuckerberg is taking personal responsibility for Facebook’s lack of safeguards, not just from a leak of user data to political consultant Cambridge Analytica, but also Russia’s meddling in the 2016 U.S. presidential election. What he said on Capitol Hill carried immense weight because public opinion of Facebook is closely tied with the co-founder.

Zuckerberg has the majority of the voting power at the company. In making major product decisions, he has preferred to let data chart the best direction for growth. That’s been an incredibly successful, if unsustainable, way to grow, giving the executive a high profile and the social network more than 2 billion users.

Facebook knows public perception of Zuckerberg is analogous to their view of the social network. The CEO started taking charge of his reputation after being portrayed in the 2010 movie, The Social Network, as a robotic, competitive genius. That same year, while talking about privacy at a conference, Zuckerberg was visibly sweating.

The executive make-over began when Zuckerberg began posting publicly on his Facebook page to persuade people he was civic-minded, intellectually curious and occasionally goofy. He held public Q&As with starstruck users in various cities, who lobbed softball questions about, say, why he always wears a gray shirt. As Facebook grew and earnings soared, he became more widely admired and trusted. The company portrayed itself as a neutral tool that anyone could use, and Zuckerberg’s likability campaign stirred rumors about an eventual run for the presidency.

Crises over murders streamed on Facebook’s video service, racist ad targeting and Russia-sponsored fake news in 2017 swiftly ended such speculation. Zuckerberg continued to portray Facebook as a “community” with a positive impact on the world, as opposed to a business — but the Cambridge Analytica scandal undermined that rhetoric by suggesting the company builds products with little regard for the privacy of user data.

On Tuesday, Zuckerberg said Facebook users own the data that they put on the site, but that the company will retain an advertising-based business model for free users.

Zuckerberg mentioned starting the company in his college dorm several times, began most answers with "Senator," and sometimes said the questions were good. Still, his patience was tested by some questions that exhibited a lack of knowledge about how Facebook works and he said repeatedly that the company doesn’t sell user data.

“He’s passed with flying colors this initial test,” said Daniel Ives, an analyst at GBH Insights. “The fear was he was going to come out as too conciliatory, back against the wall and waving a white flag. Instead, he defended the business model and took ownership of the problem. Thus far, a lot of investors can sleep better tonight than last night.”

For some observers, Zuckerberg’s testimony had two clear characteristics: A relatively polished performance mixed with promises to lawmakers and the public that fell short.

“Overall his demeanor is good,” said Gerard Braud, the principal of an eponymous crisis-communications firm. “He seems a bit nervous, but I think anyone in his shoes would feel nervous. My cynic filter was raised when he described limiting the providers that your data is shared with. Preventing it from happening again is an over-promise on his part.”

Not everyone was swayed by Zuckerberg. Senator Amy Klobuchar, a Democrat from Minnesota, said she’d heard many of Zuckerberg’s talking points already.

“We’re going to have to do privacy legislation now,” she said after noting his apology and stated efforts to hire more people to protect user data.

Zuckerberg got into a tit-for-tat exchange with Senator Ted Cruz, a Republican from Texas about whether Facebook was a neutral public forum or whether it was engaged in political speech. Zuckerberg said his company’s goal was to not engage in political speech, but the CEO didn’t directly address whether or not Facebook is a neutral public forum. Zuckerberg disagreed with Cruz’s assertion that Facebook was biased against conservatives on its platform or in its workforce.

Zuckerberg answered that he understood where the concern was coming from, because Silicon Valley is "an extremely left-leaning place," but said it’s his company’s job to make sure Facebook doesn’t have any bias in the work it does.

Senator Sheldon Whitehouse, a Democrat from Rhode Island, said he was broadly satisfied with Zuckerberg’s hearing.

“Some of the questions he’s had trouble answering because we’re a little bit talking across each other, he’s not exactly sure what we mean with various questions and some things are just more complicated than can be drilled into in five minutes,” Whitehouse said. “But in general I think he’s doing a fine job.”

Read up on GDPR, or Why Privacy Will Be Stronger in EU Than U.S.

Zuckerberg’s treatment on Tuesday may have been influenced by private meetings he took on Monday with several senators. The company also recently supported a bill to increase disclosure of online political ads, and the social network remains a key tool for politicians to get re-elected.

Senator Dianne Feinstein of California, after meeting Zuckerberg on Monday, said she found him to be “a very nice young man.”