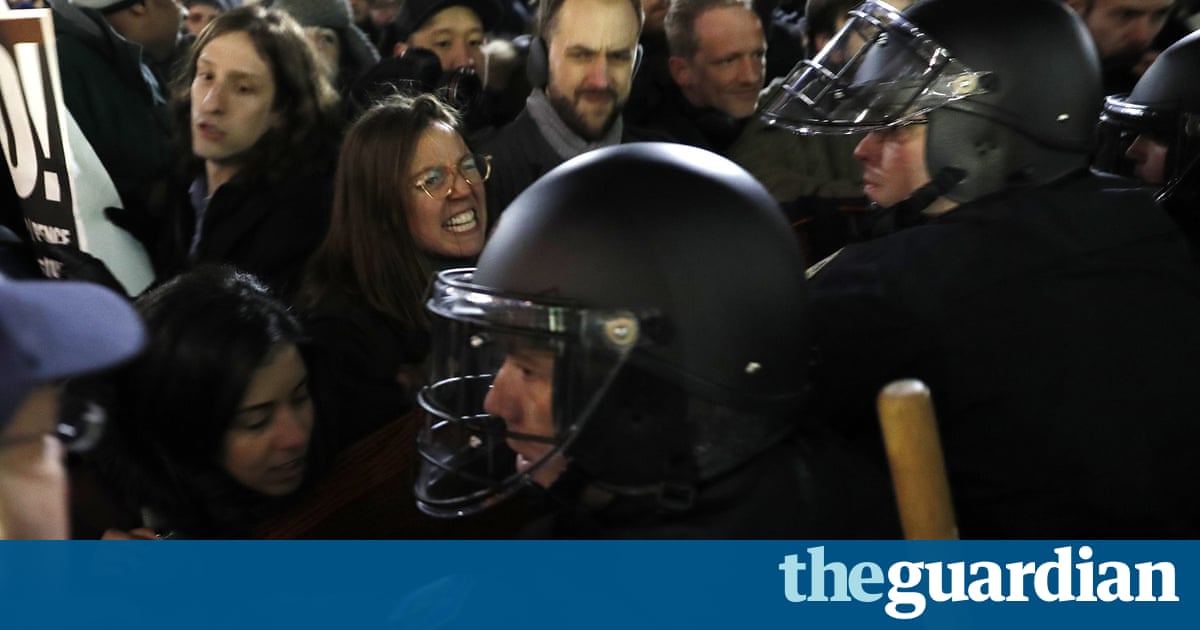 On the morning after Donald Trumps so-called Muslim ban went into effect preventing all Syrians from entering the US, halting refugee admissions for 120 days and banning the citizens of seven Muslim-majority countries for 90 days I received an affecting email featuring the photographs and names of Jewish men, women and children who died in Nazi concentration camps because the US turned me away at the border in 1939.

Now, America is repeating its mistakes of the past. But our fellow citizens did not stand by idly as this happened. On Saturday, a large crowd of protesters had gathered outside Terminal Four at John F Kennedy international airport, and similar demonstrations were in progress at airports across the country.

These protests succeeded in several significant ways. Two Iraqi men, Hameed Khalid Darweesh (a former interpreter for the US military) and Haider Sameer Abdulkhaleq Alshawi were released, through the valiant efforts of ACLU lawyers. Ann Donnelly, a federal judge in Brooklyn, as well as federal judges in Massachusetts, Virginia and Washington, ruled that those still being held in detention could not be sent back to their home countries.

But what was also extremely important was that the demonstrators at the airports and the thousands more cheering them on from home had been given concrete, inspiring evidence that their protests had made a difference. Their active refusal to let innocent people be sent home, perhaps to die, had mattered.

Since Trumps election, weve seen dozens of demonstrations most notably, the Womens March on Washington that have reinforced our sense of solidarity and provided encouraging evidence of how many Americans oppose our governments fundamentally anti-American agenda.

But the trouble is that these protests are too easily ignored and forgotten by those who wish to ignore and forget them. The barriers go up, the march takes place, the barriers come down. Everyone goes home happier.

One reason that Saturdays protests were so effective was that, while peaceful, they were disruptive. Terminal Four was closed, incoming flights were delayed. One traveller wrote, on Twitter, that his fellow passengers applauded when their pilot announced the reason why their plane would be landing an hour behind schedule.

Taxi drivers went on strike in solidarity with the detainees, and arriving passengers were forced to find alternate ways on getting home. Many used Uber, a company whose CEO, Travis Kalanick, serves on Trumps economic advisory board, and which thoughtfully suspended surge pricing to make it easier and cheaper to subvert the taxi strike.

The struggles for civil rights and Indian independence, against apartheid and the Vietnam war its hard to think of a nonviolent movement that has succeeded without causing its opponents a certain amount of trouble, discomfort and inconvenience.

And economic boycotts another sort of trouble and inconvenience have proved remarkably successful in persuading companies to cease supporting repressive governments. Of course, nonviolence has often been met with violence, but one can only hope that our hearts have not so hardened that we, as a nation, would not be troubled and shamed by the spectacle of peaceful people being arrested and bloodied, as they were in Selma and Birmingham.

So what can we do to protest our current governments callousness about our environment and our health, its rampant greed, its disrespect for life, liberty and the pursuit of happiness?

I believe that what we need is a nonviolent national general strike of the kind that has been more common in Europe than here. Lets designate a day on which no one (that is, anyone who can do so without being fired) goes to work, a day when no one shops or spends money, a day on which we truly make our economic and political power felt, a day when we make it clear: how many of us there are, how strong and committed we are, how much we can accomplish.

Meanwhile, Im deleting my Uber account and adding Lyft (which donated generously to the ACLU) in its stead. Leaving Uber is not uncomplicated, and its taken me the better part of a day to persuade them to let me go. But in the process, the site asks subscribers why they are leaving, and its a pleasure a small pleasure, but a pleasure nonetheless to let them know.

I Tweeted Out My Phone Number—and Rediscovered Humanity