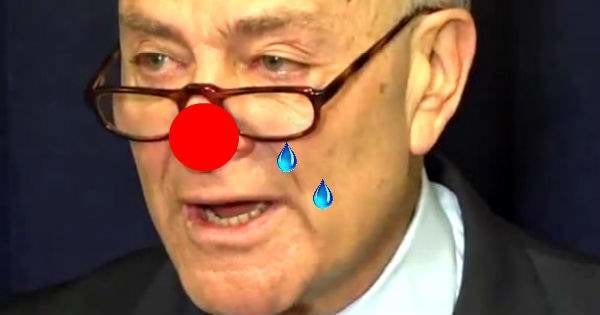 Just as we predicted, Chuck Schumer couldn’t wait to throw a tantrum after Trump tweeted about Mexico agreeing to work with America on our crisis at the border. Granted, every Leftist under the sun is trying really hard to pretend this wasn’t a win (sadly, even some on the Right) but Trump has already gotten more done at the southern border on his own than Congress has in year and years.

Which is probably why ol’ Chuck had his underwear so twisted up in this thread.

Just as I predicted, President @realDonaldTrump backed off on his threat of tariffs against Mexico.

He says that Mexico will take action to ‘greatly reduce, or eliminate, Illegal Immigration coming from Mexico and into the United States’, but if past is prologue, this is likely to be one of the president’s typical, bogus solutions to justify backing off things like the tariffs.

He can’t deal with it. He really can’t.

He precipitously proposed the tariffs, much to the consternation of the business community nationwide and Republicans in the House and Senate.

Trump got tired of waiting for Congress to do something … yes.

This is likely to have only a small impact on solving the root causes of Central American migration because many of the components are things Mexico had already said they would do.

President @realDonaldTrump ought to stop acting like a showman and start working with Democrats on our serious proposals to address the nation’s most pressing needs.

They will take more action than this ineffective Congress?

When Mexico is doing more than Congress to help with the crisis at the border? Wow.

Get to work! You are an embarrassment to the United States!

He’s too busy being mad at Trump for getting to work.

Yet another Democrat who knows a great deal about nothing.

It’s what they do.

You are so full of it Chuck. As a senator, you are a failure. You and you party have done nothing to help the American people. I wish NY would wake up. The state is in chaos.

@SenSchumer criticizes but offers no solutions.

Immigration reform chuckie! Get to work and quit whining…,

Chuck knows if we really do have progress along the southern border that Democrats lose a key talking point for the 2020 Election, not to mention he knows they’ll lose numbers.

No wonder he’s so whiny.

Twitter will start testing its ‘hide replies’ feature next week, in Canada