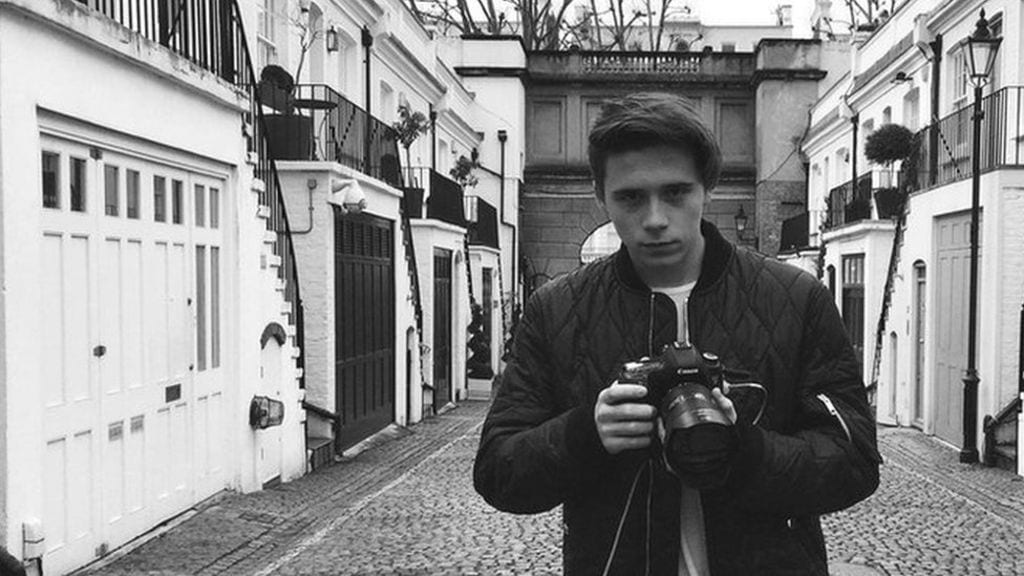 When Brooklyn Beckham revealed on his Instagram feed that he would be photographing Burberry’s latest fragrance ad campaign, the outrage was palpable.

Commentators rushed to criticise the fashion house’s choice of the 16-year-old son of David and Victoria Beckham for the shoot, instead of an established industry professional.

“Insulting to every artist out there”; “completely disrespectful to the artist community”; and “so tired of these celebrities buying their kids into everything” were some of the printable reactions.

But Burberry boss Christopher Bailey suggested it might have been Brooklyn’s 5.9 million Instagram followers, rather than his parents, that got him the gig.

“Brooklyn has a really great eye for image and Instagram works brilliantly for him as a platform to showcase his work,” he said.

And this is the new reality: the choice of Brooklyn as photographer was less about how well-connected famous people can get their kids into competitive professions than a reflection of just how much social media has shaken up the fashion industry.

“You don’t want to be a commercial photographer unless you’re famous,” says Scott Galloway, clinical professor of marketing at the NYU Stern School of Business in New York, and founder of “digital benchmarking” firm L2.

The influence of social media has also rapidly changed how models are chosen.

Kendall Jenner, who shot to fame thanks to the Keeping Up with the Kardashians reality TV show, has been dubbed the “ultimate Instagirl” for her huge social media fan base: 48 million followers on Instagram and 15.3 million on Twitter.

It was probably this status as the most-followed model on Instagram, as much as her looks or talent, that scored her the top job as the face of cosmetics giant Estee Lauder, says Mr Galloway.

“You’re seeing a reshaping of an industry,” he argues. “My friends don’t forward me a picture of a really great air conditioner, but forwarding fashion is fun and interesting.”

While trying to work out whether sales are directly linked to social media campaigns is difficult, companies with higher levels of engagement on Instagram are tending to grow their online sales faster than their less clued-up rivals, turning the traditional fashion hierarchy on its head.

Domenic Venneri, founder of digital marketing agency Vokent, says his firm always looks at the social media profiles of people before deciding who to use in a campaign.

In some cases, not just the models but the entire backstage team – including the make-up artists, stylists and producers – are selected according to their influence on social media.

“We won’t do a photoshoot that goes on a billboard somewhere unless everyone involved has some sort of [social media] following and some sort of leverage,” says Mr Venneri.

For fashion firms, the appeal is two-fold: it’s cheaper and it seems more personal and authentic.

“They’re trying not to make it look too slick. It’s meant to be loose and conversational rather than structured and professional,” he says.

For customers, the appeal is obvious: they think they’re getting a peek inside a famously exclusive and private world.

The reality is rather different, says Emma Parlons, head of digital at fashion and beauty public relations agency Push PR.

“They don’t reveal too much. What we see is highly curated. Yes, fashion houses are using social media to engage with their fans, but it’s in a very controlled way.”

Controlled or not, she says it’s effective, bringing in a new, typically younger audience than the customers who use a brand’s website or shops.

“It’s a walking, living magazine,” she says. “People think ‘oh that’s what it looks like with a denim skirt’.”

It’s worked for Burberry. Behind-the-scenes pictures and videos shared on its Instagram and Snapchat feeds of the Brooklyn shoot had some 15 million impressions in the eight hours the shoot was live.

The fashion retailer has nearly 40 million followers across 20 different social media platforms and openly admits that it has become as much a media content producer as a design company.

It was the first of the big fashion houses to “live stream” its catwalk shows over the internet. On some platforms customers can click through to buy certain garments as soon as they see them on the catwalk. And it has its own Instagram-style micro-site – Art of the Trench.

In September, it debuted its spring/summer 2016 collection on photo messaging app Snapchat ahead of the official show.

While the company is coy about the exact breakdown of online versus shop sales, it says the “majority of traffic” to its website now comes from mobile, its “fastest growing digital channel”.

Yet not all the big fashion houses have embraced social media due to concerns over the potential loss of control over their brand image.

This may be a risky approach, however.

Online sales in 2014 accounted for just 6% of the $250bn (172bn; 224bn) global market for luxury goods, but they’re growing at a much faster rate than shop sales, according to management consultancy McKinsey.

Its latest research, based on analysis of 7,000 shoppers, found that three out of four luxury purchases, even if they still take place in shops, are influenced by what consumers see, do and hear online.

“The question is no longer if and when luxury brands should embrace the digital opportunity, but how they should go about doing it,” it said.

Why don’t I have any friends? You asked Google – here’s the answer |...