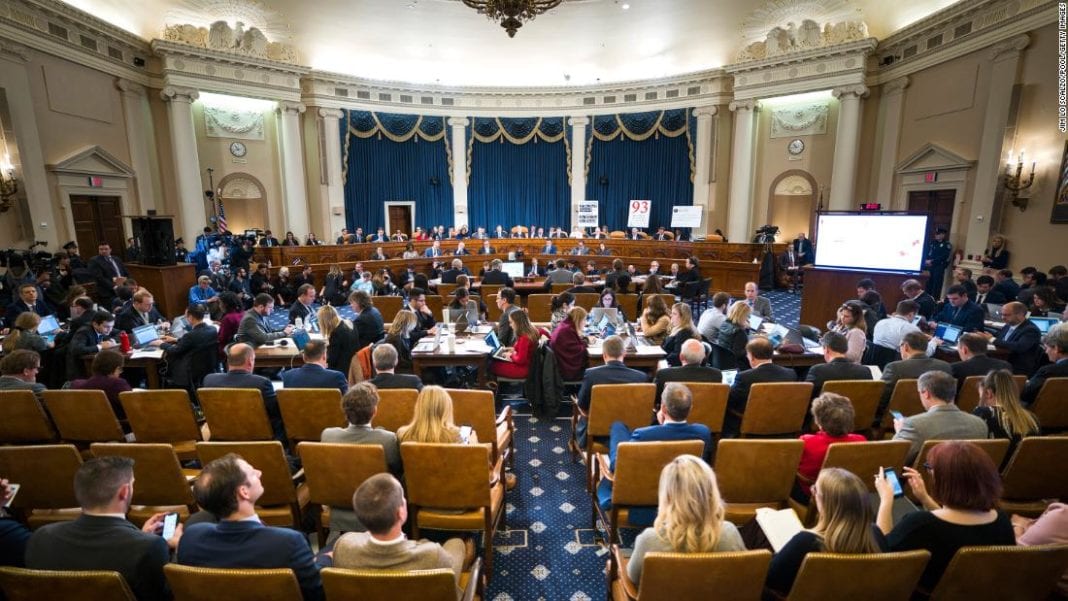 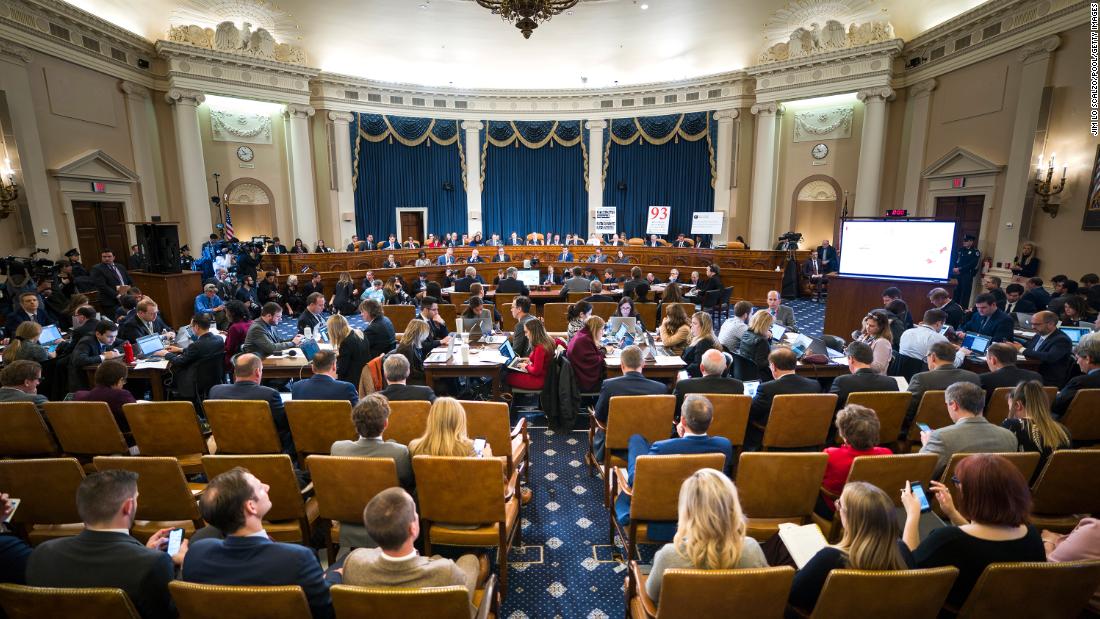 In one bizarre episode, a Republican lawmaker sent 23 tweets that appeared to slam the impeachment probe as a “sham” and “hearsay,” but were ultimately a reference to a meme linked to a right-wing conspiracy theory. Other prominent conservatives called the hearing “boring” on social media as President Donald Trump used the opportunity to solicit campaign funds via text message and email.
The tactics offer a glimpse into the online conservative playbook as the impeachment probe enters a new public phase. Dave Karpf, a researcher in online political communication at George Washington University, said much of it resembles “basic trolling behavior.” 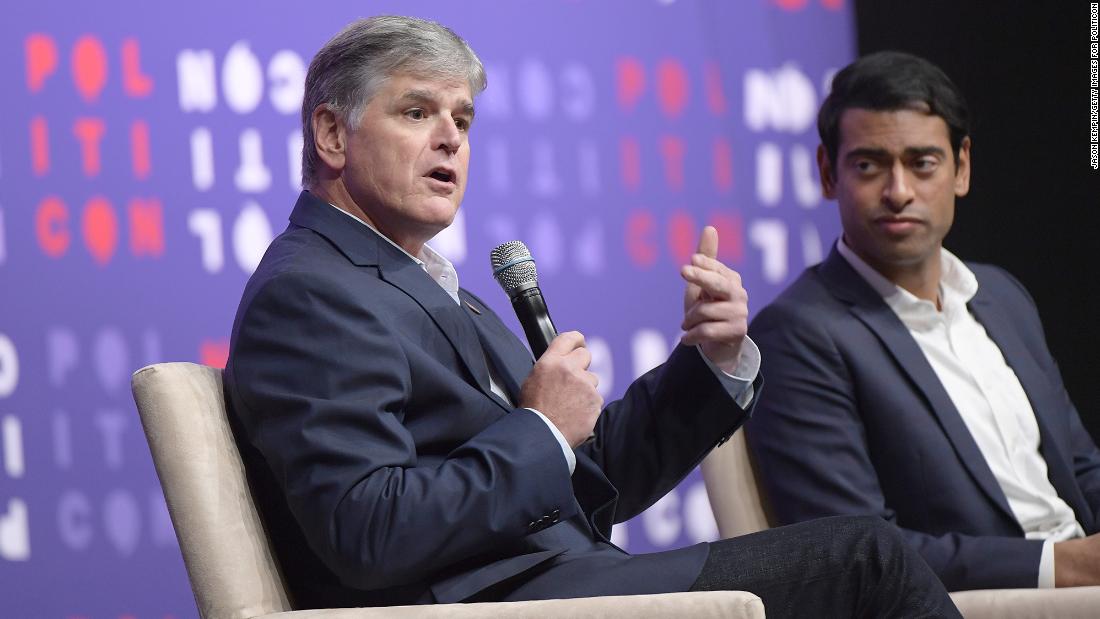 “It’s indicative of what we are and will be hearing from Republican elected officials and conservative media,” he said. “The facts of the case are damning, but they’ve been disseminated in a slow drip. Rather than arguing the facts, they take refuge in the style.”
The approach underscores how the internet — long viewed as a mirror simply reflecting the real world — is increasingly being used by powerful actors to shape the public’s perception of reality.
Arizona Republican Rep. Paul Gosar’s string of tweets on Wednesday may have best summed up the day, as it delighted some internet conspiracy theorists when it turned out the first letter from each of his 23 tweets spelled out a viral meme: “Epstein didn’t kill himself.” It’s unclear whether Gosar himself believes in the conspiracy theory, which baselessly speculates that foul play was involved in the death of disgraced financier Jeffrey Epstein. When the acrostic poem was discovered, Gosar didn’t back away. Instead, he tweeted another acrostic that spelled “Area 51.”
The tone of the episode clashed strongly with the gravity of what was underway inside the hearing room: The fourth presidential impeachment inquiry in US history.
Critics of the hearing sought to undermine the proceeding in other ways, including by using an out-of-context social media post to mislead the public. Republicans scrubbed the context from a two-year-old tweet sent by Mark Zaid — a lawyer who represents the whistleblower whose disclosures prompted the impeachment inquiry — then printed it and displayed it on an easel positioned prominently behind lawmakers in the hearing room in a bid to discredit the proceeding.
The poster showing Zaid’s tweet, which originally referred to Trump’s firing of Acting Attorney General Sally Yates as a “#coup,” removed all mention of the firing in a way that falsely suggested Zaid has been plotting a years-long rebellion against Trump.
Others on social media, meanwhile, continued to cite a name that some conservatives believe belongs to the whistleblower. Even though Facebook and YouTube said last Friday they would remove content mentioning the supposed whistleblower’s name, CNN Business found multiple mentions of the name across both platforms this week — even some posts that contain multiple mentions of the name.
As if to flood the zone with counter-programming against the hearing, the Trump campaign ran more than 2,000 ads on Facebook about impeachment, according to data analyzed by Laura Edelson, a researcher at New York University’s Tandon School of Engineering.
“The Impeachment Scam hearings begin today!” one early morning ad read. It was accompanied by a video of Trump attacking Democrats for trying to impeach him.
In total, the ad buy will cost the Trump campaign somewhere between $40,000 and $260,000, according to Edelson’s analysis. The campaign could make some of that money back with its fundraising blitz, which called the hearing a witch hunt and urged supporters to help Trump raise $3 million in 24 hours.
The National Republican Congressional Committee (NRCC) has been running targeted ads for the past week with pictures of Democratic lawmakers who voted to start impeachment proceedings.
A modest Facebook (FB) ad spend of up to $700 has allowed the NRCC reach up to 45,000 people in Pennsylvania with an attacking Democratic Rep. Conor Lamb who is from the state, according to data from Facebook’s political ad library. Lamb is up for re-election next year.
The only Democrat who spent big on impeachment ads on Facebook this week, according to Edelson, is Tom Steyer, whose presidential campaign has spent up to $74,000 since Monday on ads supporting impeachment. Steyer was an early supporter of an impeachment probe. In July, a group that he founded ran a pro-impeachment ad on CNN and MSNBC.