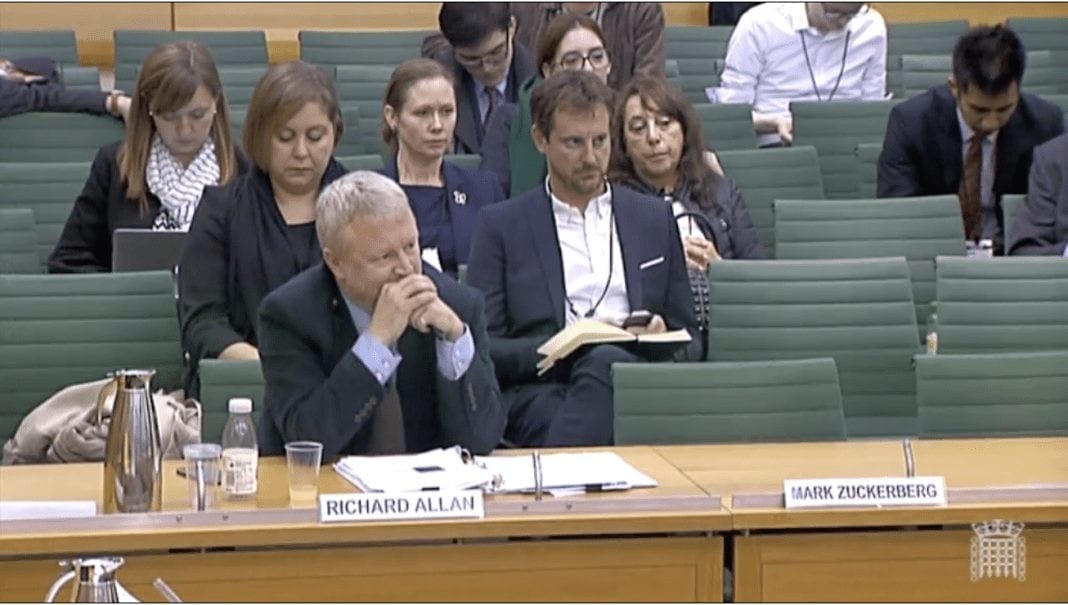 A grand committee of international parliamentarians empty-chaired Mark Zuckerberg at a hearing earlier today, after the Facebook founder snubbed repeat invitations to face questions about malicious, abusive and improper uses of his social media platform — including the democracy-denting impacts of so-called “fake news.”

The U.K.’s DCMS committee has been leading the charge to hold Facebook to account for data misuse scandals and election interference — now joined in the effort by international lawmakers from around the world. But still not by Zuckerberg himself.

In all, parliamentarians from nine countries were in the room to put awkward questions to Zuckerberg’s stand-in, policy VP Richard Allan — including asking what Facebook is doing to stop WhatsApp being used as a vector to spread political disinformation in South America; why Facebook refused to remove a piece of highly inflammatory anti-Muslim hate speech in Sri Lanka (until the country blocked access to its platform); how Facebook continues to track non-users in Belgium and how it justifies doing so under Europe’s tough new GDPR framework; and, more generally, why anyone should have any trust in anything the company says at this point — with the company neck-deep in privacy and trust scandals.

The elected representatives were collectively speaking up for close to 450 million people across the U.K., Argentina, Belgium, Brazil, Canada, France, Ireland, Latvia and Singapore. The most oft-repeated question on their lips was why wasn’t Zuckerberg there?

One question: where is Mark Zuckerberg? pic.twitter.com/BK3KrKvQf3

Allan looked uncomfortable on his absentee boss’ behalf and spent the best part of three hours running the gamut of placative hand gestures as he talked about wanting to work with regulators to find “the right regulation” to rein in social media’s antisocial, anti-democratic impacts.

Canadian MP Bob Zimmer spoke for the room, cutting into another bit of Allan’s defensive pabulum, with: “Here we are again hearing another apology from Facebook — ‘look trust us, y’all regulate us etc but we really don’t have that much influence in the global scheme of things.’

“In this room we regulate over 400 million people and to not have your CEO sit in that chair there is an offence to all of us in this room and really our citizens as well.”

“[BlackBerry co-founder] Jim Balsille said, when I asked him on our committee, is our democracy at risk if we don’t change the laws in Canada to deal with surveillance capitalism?” Zimmer continued. “He said: ‘Without a doubt’. What do you think?” — which Allan took as a cue to ummm his way into another series of “we need tos” and chatter about “a number of problematic vectors” he said Facebook is trying to address with a number of “tools.”

The session was largely filled up with such frustratingly reframed waffle, as Allan sought to deflect, defang and defuse the committee’s questions — leading it to accuse him more than once of repeating the “delay, deny, deflect” tactics recently reported on by The New York Times.

Allan claimed not — claiming to be there “acknowledging” problems. But that empty chair beside him sure looked awkward.

At the close, Canada’s Charlie Angus sought to sweep Facebook’s hot air away by accusing Allan of distracting the debate with discussion of symptoms — to draw the regulatory eye away from the root cause of the problem which he sharply defined as Facebook itself.

“The problem we have with Facebook is there’s never accountability. So I would put it to you when we talk about regulation that perhaps the best regulation would be antitrust,” said Angus. “Because people who don’t like Facebook — oh they could go to WhatsApp. But oh we have some problems in South America, we have problems in Africa, we have to go back to Mr Zuckerberg who’s not here.

“My daughters could get off Facebook. But they’d go to Instagram . But that’s now controlled by Facebook. Perhaps the simplest form of regulation would be to break Facebook up — or treat it as a utility so that we could all then feel that when we talk about regulation we’re talking about allowing competition, counting metrics that are actually honest and true, and that Facebook has broken so much trust to allow you to simply gobble up every form of competition is probably not in the public interest.

“So when we’re talking about regulation would you be interested in asking your friend Mr Zuckerberg if we could have a discussion about antitrust?”

Allan reached for an “it depends upon the problem we’re trying to solve” reply, to try reframing the question again.

“The problem is Facebook,” retorted Angus. “We’re talking about symptoms but the problem is the unprecedented economic control of every form of social discourse and communication. That it’s Facebook. That that is the problem that we need to address.”

Committee chair Damian Collins also gave short shrift to Allan’s attempt to muddily reframe this line of questioning — as regulators advocating “turning off the internet” (instead of what Angus was actually calling for: A way to get “credible democratic responses from a corporation”) — by interjecting: “I think we would also distinguish between the internet and Facebook to say they’re not necessarily the same thing.”

The room affirmed its accord with that.

At the start of the session Collins revealed the committee would not — at least for now — be publishing the cache of documents it dramatically seized this weekend from the founder of a startup that’s been suing Facebook since 2015, saying it was “not in a position to do that.” Though at a later press conference he said the intent is to publish the documents.

At several points during the session DCMS committee members also appeared to tease some new details culled from the documents, asking for example whether Facebook had ever made API decisions for developers contingent on them taking advertising on its platform.

Allan said it had not — and appeared to be attempting to suggest that the emails the committee may have been reading were the result of “normal” internal business discussions about how to evolve Facebook’s original desktop-based business model for the mobile-first era.

Collins did detail one piece of new information during the hearing which he categorically identified as having been sourced from the seized documents — and specifically from an internal email sent by a Facebook engineer dating from October 2014 — suggesting this item looked to be of significant public interest.

“An engineer at Facebook notified the company in October 2014 that entities with Russian IP addresses had been using a Pinterest API key to pull over 3 billion data points a day through the ordered friends API,” he revealed, asking Allan whether Facebook reported that “to any external body at the time?”

The Facebook VP responded by characterizing the information contained in the seized documents as “partial,” on account of it being sourced via a “hostile litigant.”

“I don’t want you to use this opportunity just to attack the litigant,” retorted Collins. “I want you to address the question… What internal process [Facebook] ran when this was reported to the company by an engineer? And did they notify external agencies of this activity? Because if Russian IP addresses were pulling down a huge amount of data from the platform — was that reported or was that just kept, as so often seems to be the case, just kept within the ‘family’ and not talked about.”

“Any information you have seen that’s contained within that cache of emails is at best partial and at worst potentially misleading,” responded Allan. “On the specific question of whether or not we believe, based on our subsequent investigations, that there was activity by Russians at that time I will come back to you.”

We reached out to Pinterest to ask whether Facebook ever informed it about such an abuse of its API key. At the time of writing it had not responded to our request for comment.

Update: A spokesperson for Pinterest told us: “We’re currently investigating and have reached out to Facebook for any information they may have.”

In another development after the hearing, Facebook also unsealed a selection of the documents Collins had been referring to (below) — which appear to suggest there was no external investigation of the Pinterest incident.

Facebook have broken the seal on the court documents from California; will they now ask for the rest to be released? These emails show there was no external investigation of Russian IP addresses calling for Facebook data & don’t confirm how much was taken. https://t.co/5l49CnWtXU

Free software to reveal how Facebook election posts are targeted