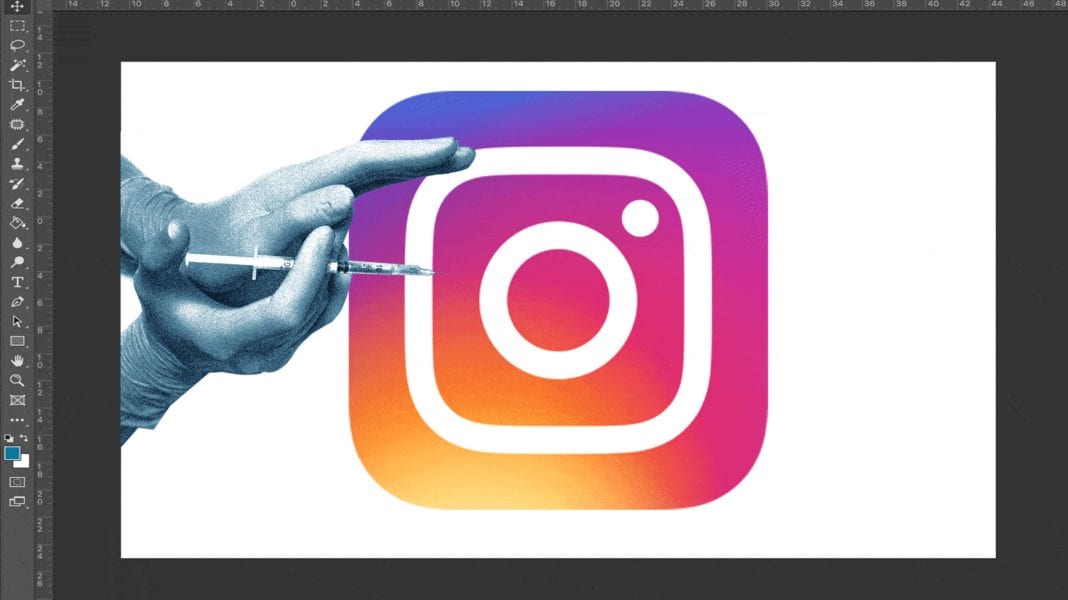 The reality star isn’t the only celebrity that regularly uses the FaceTune app to alter photos to make themselves look smoother, thinner, and younger. Actress Sarah Hyland has admitted to leaning on the app to look good and YouTuber James Charles even dedicated an entire video to the art of the FaceTune.

Not all celebrities and influencers are as upfront about their editing tricks—a reluctance that’s led to a wave of hit Instagram accounts dedicated to calling out celebrities for editing their photos.

The biggest account might be @celebface, which boasts a whopping 1.2 million followers. Anna, the 25-year-old behind @celebface, regularly calls out famous stars like Hailey Bieber, Bella Hadid, and Britney Spears for editing their photos and presenting to their followers a false idea of what they look like.

Anna says she believes some celebrities aren’t too fond of the account, considering Hadid and fellow Victoria’s Secret model Elsa Hosk have blocked the page. But Anna says it’s not a hateful page.

“I wanted to show the difference between a magazine photoshoot and reality,” Anna said in an email interview. “Nobody is perfect. This is not a page for hate. I just want people to be confident.”

Since @celebface’s inception in 2015, similar accounts have popped up, like @fatherkelstruth, an account that prides itself on “exposing lies, surgeries & photoshop.” “Celebs & ig models hate this account for showing you the truth,” its bio states.

Nicolette, a 16-year-old who didn’t feel comfortable giving us her last name, started the account in spring 2018 to “expose” influencer Kelsey Calemine (@fatherkels), citing Calemine’s tweets in claims that she was racist and homophobic. After Calemine blocked Nicolette’s account in December 2018, Nicolette moved on to other influencers and celebrities but kept the handle.

Now, the account is booming with more than 44,000 followers. Some posts are looping videos of two photos to show the difference of a celebrity’s original pic compared to the photo they FaceTuned and presented to the world. Other content details plastic surgeries or busts influencers for perceived hypocrisies, like a post showing influencer Madison Beer wearing real fur after tweeting about animal rights.

“They’re just like everyone else and I’m glad I have a following so I can help young people such as myself to be confident with who they are,” she said.

She might not be off-base. JAMA Facial Plastic Surgery, the American Medical Association’s peer-reviewed medical journal, conducted a study on how the popularity of filtered photos led teenagers to want plastic surgery to look like their edited selves.

The hunt begins when Nicolette sees a photo of a celebrity on Instagram that looks too good to be true. She’ll start digging for the original photo, typically spending an hour or two per post—a dedicated hobby that she has to balance with her school workload.

Nicolette admits that she’s still a typical 16-year-old and FaceTunes photos that she posts on her personal account, mainly to smooth her skin and fix “a few minor things.”

“I don’t look like a completely different person when I do [FaceTune],” she said. “I don’t have a problem with Photoshopping.” What gets to her is “when these girls claim they don’t touch their photos when they clearly do.”

Diana, a 29-year-old who declined to share her last name, started @s0cialmediavsreality last August. Her account, which promises to “show people that celebrities are just like us,” showcases how famous faces have changed over the years (implying plastic surgery, usually) or what a celebrity looks like in “real life” compared to the images they post to Instagram. Her followers make requests and she does her best to find the images they’ve asked for, logging into her account usually on an hourly basis.

“The purpose of my account is to open people’s eyes when it comes to what they see on social media and what the reality behind those images is,” she said via email. “I want people — especially young people—to realize that most of what they see on Instagram is all an illusion.”

Elena Davies, a former Big Brother contestant turned Instagram influencer, says she tries to balance using FaceTune with showing her natural self. Davies broadcasts her personal brand to more than a quarter of a million followers.

“I recognize that I have a big reach and that other women and young girls consume my content with intention so I have always been pretty transparent on my page,” she said.

Davies says she’s not afraid to edit out her own breakouts when need be, but “that same day, I’ll likely hop on stories without makeup to remind my followers that I still enjoy a good game of connect the dots on my chin.”

Davies admits she enjoys seeing these Instagram accounts call out celebrities and influencers for their “extreme” Photoshop jobs because it’s good to remember that online, perception is rarely reality.

Diana says her account has been hacked twice but never disabled. However, the admin behind @beauty.fake says her first page was deleted because, she assumes, people reported the page.

The owner of another popular influencer call-out account, @beauty.fake, wouldn’t give us her name or age. Keeping her account active has been an uphill battle, and she maintains a backup page to archive posts in case her account is suddenly taken down. The account highlights a lot of German influencers but also posts about mainstream celebs like Kim Kardashian and Billie Eilish. The account owner claims that influencers DM her to accuse her of “cybermobbing” and being a bad person who “god will judge.”

Still, the owner of @beauty.fake describes herself as a “victim” of influencer culture. “I bought a lot of stuff from their shops or stuff they promoted,” she wrote via DM. “I think a lot of kids make the same mistakes.”

Facebook is exploiting children who feel “worthless” with targeted ads